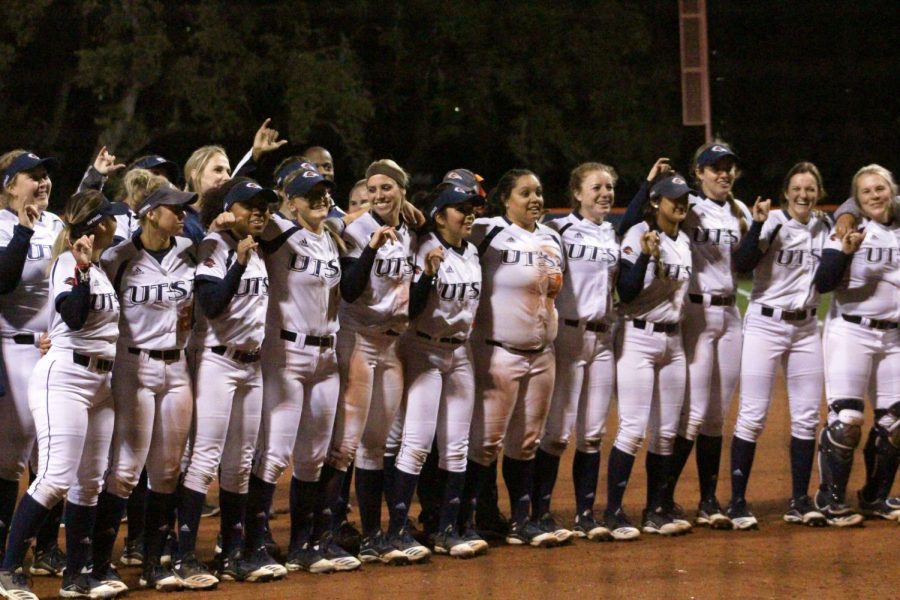 The Roadrunners sing the UTSA Alma Mater after a 6-2 victory over the Houston Baptist University Huskies on Feb. 12 at Roadrunner Field. Photo by Julia Maenius.

The first game of the Boerner Invitational saw the ‘Runners taking on the Jayhawks, which came down to the wire. The ‘Runners scored on the first inning of the game, but they were met with four runs by the Jayhawks, putting the ‘Runners down early. The Jayhawks continued to lay on the runs, with two scores in the second by a homer, but the ‘Runners retaliated with a home run by Taylor Medina, which allowed Riley Grunberg and Kindell Brooks to post a run. The score going into the seventh was 4-7 after the Jayhawks scored in the sixth, which put the ‘Runners in a tight position, as they were down three runs heading into the last inning. After loading the bases through good hits, Medina hit a grand slam in the third inning which allowed Grunberg, Brooks and Hannah Boring to score, 8-7. The ‘Runners allowed three hits in the seventh inning, but they all resulted in outs, making the final score 8-7.

In the next game against the Mavericks, the ‘Runners controlled most of the game after taking an early lead at 6-1 until the fifth inning in which the Mavericks racked up four runs, putting them within one run of the ‘Runners. The ‘Runners got their rhythm back in the seventh and secured the win after two hits to the right field, which both resulted in runs, making the final score 8-5.

The next two games were against the Scarlet Knights, which the ‘Runners split with the Knights one a piece. The ‘Runners ended the first game with a 2-1 victory. The Knights got up early with a 1-0 lead after a wild pitch in the third, but the ‘Runners struck out in the fifth inning, with a home run by Celeste Loughman and a run by Brooks after a hit by Tori Villarreal went far down center field. The final score was 2-1. The next game, the ‘Runners only had one score, which came from the Knights in the sixth inning with a double run from a home run, 2-0. This was the first loss from the ‘Runners in this tournament.

The final game of the tournament had the ‘Runners facing off against the Mavericks once again. The Mavericks scored right off the bat in the first inning, but the ‘Runners matched with four of their own. After loading the bases with Loughman, Medina and Brooks, Loughman got a run after Villarreal took a walk. Brooks and Medina got a run following a single from Marena Estell and Lauren Coerver taking a hit by the pitcher. To close out the first inning, Boring hit a fly ball, which got Villarreal a run. The third inning seemed like deja-vu with the Mavericks getting two runs and the ‘Runners matching with four. There were back-to-back home runs by both Medina and Villarreal, and later in the inning, Coerver and Boring scored two runs after a hit left by Brooks left the plate wide open. The score was 8-4 going into the final inning. The Mavericks mounted an unsuccessful come-back, scoring three runs, only putting them down one run. The ‘Runners finished the game up, 8-7.