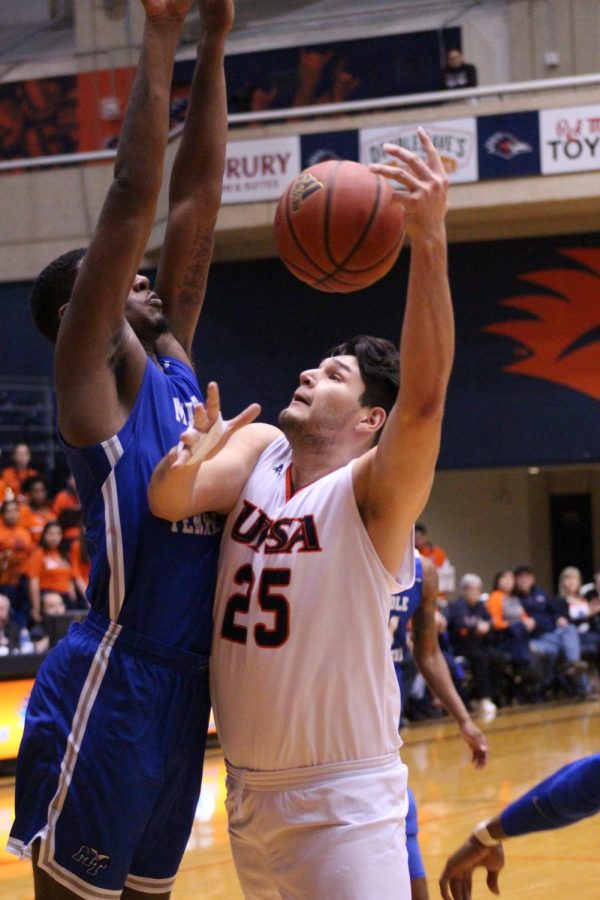 Adrian Rodriguez rebounds the ball and scored with a put-back. Rodriguez made his first career start against the University of Alabama at Birmingham Blazers.

The UTSA men’s basketball team (12-16, C-USA 6-9) began their slate of Conference USA (C-USA) Bonus Play games Feb. 27 with a loss against the Florida Atlantic University (FAU) Owls, 71-80. C-USA holds the Bonus Play each year to determine the seeding of all teams for the Conference Championships.

The Roadrunners traveled to Boca Raton, Florida, to face the Owls. The Owls jumped out early with a 10-point lead on the ‘Runners with multiple offensive rebounds, taking a 13-2 lead. Junior guard Jhivvan Jackson secured 38 points for the ‘Runners, marking his 25th game with 20 points or more. The ‘Runners managed to cut the Owls’ lead to 36-20 after a 6-0 scoring run late in the first half and multiple free throws from junior guard Keaton Wallace and freshman forward Jacob Germany. Freshman guard Eric Czumbel added to the run with a basket from the paint. The Owls held the lead going into the half with a 45-23 lead over the ‘Runners, only shooting 26.9% from the field.

Junior forward Luka Barisic recorded his seventh game of the year in double-figure scoring with 12 points, and senior forward Byron Frohnen secured his 128th consecutive career start with seven rebounds. The Owls brought their lead back to 22 points to open the second half. The ‘Runners were unable to catch the Owls offensively as they trailed 37-60 before Wallace cut the lead to 12. The Owls responded with multiple baskets from the field to close the game on top, 80-71.

The ‘Runners returned home to the Historic Convocation Center on Sunday, March 1, to face the University of Alabama at Birmingham Blazers in their second Bonus Play match. The Blazers challenged the ‘Runners with a heavy defense early in the first half, keeping the ‘Runners from scoring. The Blazers’ defense kept the ‘Runners at bay with only one secured basket from the field in their first 10 attempts. The ‘Runners answered with a 9-0 run from Wallace. Both teams had 23 points on the board going into the half.

The Blazers claimed the first seven of 10 points to kickstart the second half. Wallace began his second assault on the UAB defense with a 9-0 scoring run. Jackson followed Wallace’s lead and recorded two three-pointers to decrease the Blazers’ lead, 55-52. Jackson assisted Frohnen with a drive to the basket, cutting the lead to one with less than four minutes left in the half. An assist from Frohnen connected redshirt sophomore Adrian Rodriguez with an open layup to chip away at the Blazers’ lead. This game marked Rodriguez’s first career start for the ‘Runners. Jackson led both teams in scoring as the ‘Runners recorded a 16-0 run for the second half, increasing the ‘Runners’ lead and securing the win over the Blazers, 66-59.

The ‘Runners will be back on the road as they travel to Norfolk, Virginia to face the reigning C-USA Champions, the Old Dominion Monarchs, on Wednesday, March 4. Heading back to the Convocation Center on Saturday, March 7, the ‘Runners will bring the Marshall Thundering Herd back to the Bird Cage for their last match in Bonus Play before the C-USA Championship Tournament in Frisco beginning March 11.