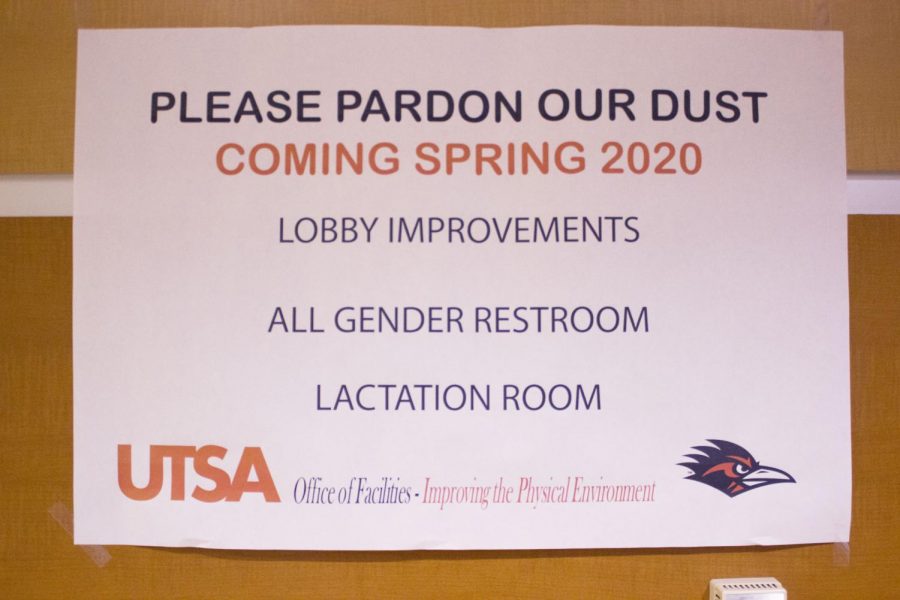 An all-gender bathroom is being constructed on the first floor of the John Peace Library (JPL) and will be ready for use in April 2020.

“Some restrooms at UTSA were already converted to all-gender and are identified by signage,” Anderson said. “The university has a five-year construction plan to convert or add more all-gender restrooms in the future.”

According to Anderson, the idea for these bathrooms came from a conversation between President Dr. Taylor Eighmy and UTSA’s LGBTQ+ Affinity Group.

“[Eighmy] continued that discussion during a listening tour with UTSA students, faculty and staff,” Anderson said. “President Eighmy recognized that, as part of UTSA’s core values incorporating all-gender restrooms on our campuses is another step in fostering inclusivity at UTSA.”

Anderson expressed the importance of the all-gender bathrooms to UTSA’s inclusivity.

“As a diverse community of more than 36,000 students, faculty, staff and visitors, it’s important that we support a culture of inclusive excellence and help it flourish,” Anderson said. Having all-gender restrooms is one way to be intentional in our practice of being welcoming and inclusive of everyone.”

Anderson stated that “UTSA’s communication channels such as UTSA Today and social media” will be used to promote the bathrooms and keep the community updated.

“Gender-inclusive bathrooms provide a safe, private facility for transgender, genderqueer, and gender non-conforming people, families with children, and people with disabilities who may need assistance,” said UTSA’s Office of Inclusive Excellence on their webpage.