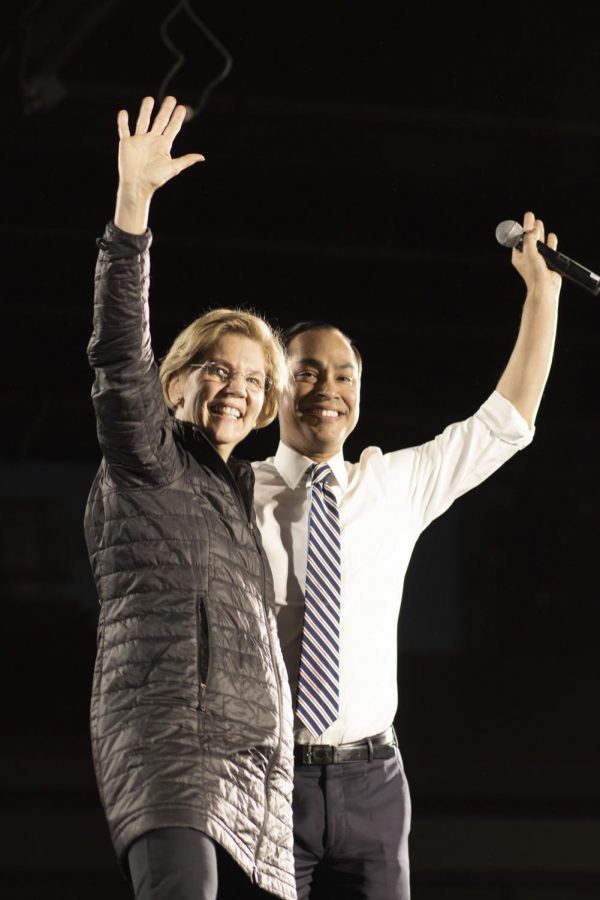 Elizabeth Warren and Julián Castro embrace at Warren’s San Antonio rally. Castro has endorsed Warren for president since he dropped out of the presidential race several month ago.

Senator Elizabeth Warren held a town hall at Sunset Station on Feb. 27 to promote her campaign before the Texas primaries on March 3. She was joined by former Mayor of San Antonio Julián Castro, who suspended his campaign for president on Jan. 2.

The event began at 7 p.m. with Castro coming on stage and talking about his experiences traveling for his campaign. He explained his reasoning for supporting Warren after his campaign suspension and welcomed her on stage.

The attendees cheered Warren on stage while chanting her name. She introduced herself as “the woman who is going to beat Donald Trump.”

Warren began her time on stage by showing her support for Castro and their partnership.

“I’m here to fight for an America that works for everyone, and I couldn’t ask for a better partner in that fight than Julián Castro,” Warren said.

After a brief introduction of herself and her upbringing, Warren discussed three major points of her campaign.

“I just want three little things,” Warren said. “Let’s fight back against the influence of money. Let’s make some structural change in our economy. Let’s protect our democracy.”

Warren described her plans to restructure the economy and fight against large corporations as “the biggest anti-corruption plan since Watergate.” She expressed her passion for voting advocacy and abolishing both gerrymandering and voter suppression laws in order to protect democracy.

The town hall wrapped up with three questions from audience members and a closing statement from Warren.