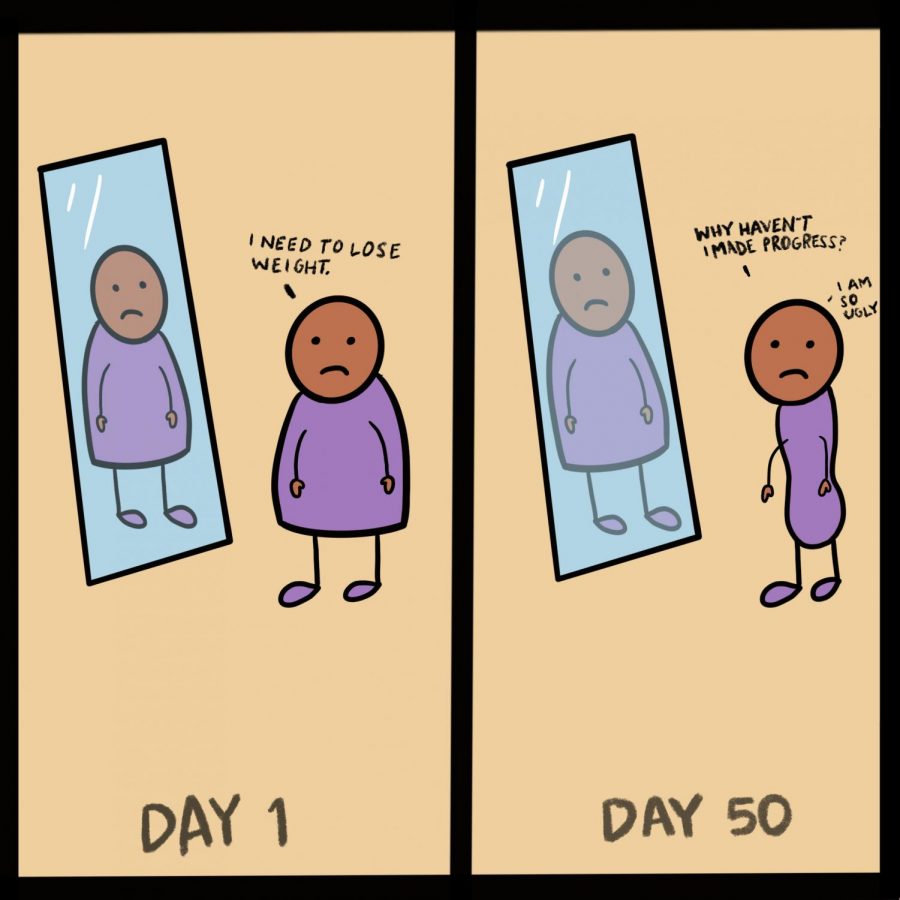 In retrospect … I think I had an eating disorder.
Sitting in my introduction to psychology class, my 19-year-old-freshman-self saw an all too accurate description of a difficult period in my life, a time when I was obsessed with my weight.
For several months during high school, a typical day included weighing myself multiple times, counting calories, drinking only water, working out multiple times, constantly looking in the mirror and chewing gum to keep hunger at bay.
I wish I could pinpoint what triggered this behavior, but I think it was a combination of things: anxiety, criticisms from others, comparing myself to others, society’s idea of beauty at the time and wanting to be accepted. My obsessiveness was reinforced with every compliment people gave me as my body wasted away.
I was initially fit and healthy but even as a healthy young woman, I didn’t see myself as thin enough. I wanted to weigh as little as my friends and wear pants as small as the ones they wore. Every pound counted. Body positivity was not popularized at the time and I didn’t understand that no one was as critical of my appearance as I was.
At my thinnest, I weighed around 120 pounds and size two pants were loose on me, which was not healthy for the five-foot-five-inch athlete that I was. If I had not had an emotional breakdown that led me to emotionally binge eat, I don’t know how extreme I would have gotten or how warped my self-perception would have grown. While this saved me from a road towards anorexia nervosa, it was the start of a new battle.
Instead of depriving myself of food, I overindulged to an extreme length. I ate anything and everything in sight to the point of my stomach aching. I cleared off every plate in front of me even if I wasn’t hungry. I gained about 40 pounds in a very short period of time.
From my sophomore year of high school to my first semester of college, I struggled with my eating habits and body perception. It wasn’t until I began learning about eating disorders and body dysmorphia through my psychology classes, social media and the people I met along the way, that some normalcy returned to my life. I had to learn to think differently about food, exercise and my appearance.
Maybe if I would have known about eating disorders, and what it meant to have an unhealthy relationship with food, my journey would have been different. Maybe I would not have struggled as long if I had known what anorexia nervosa, bulimia and binge-eating disorders were and received treatment. While I don’t know the answer to these hypotheticals, I have hope for people going forward. The growing awareness of eating disorders and their counterpart, body dysmorphia, is a step in the right direction.
According to WebMD, anorexia nervosa, bulimia nervosa and binge eating are all eating disorders that stem from having an unhealthy relationship with food. They can become serious and have lasting effects on a person’s health if untreated. These eating disorders are most common among women but affect men too. People, such as myself, tend to hide or deny that they have an eating disorder which is why the growing conversation encourages me that others may get the help that I didn’t have due to simply not knowing. Body dysmorphic disorder is similar to eating disorders. While eating disorders focus on weight, body dysmorphic disorder is a mental disorder that causes a person to become concerned with a specific body part. This chronic disorder is equally common among men and women and can cause someone to become so obsessed with their perceived flaw that it affects various aspects of their life.
Both of these types of disorders are associated with anxiety and wanting control in one’s life.
Someone on the outside looking in may not understand or even see the “flaw” a person with an eating disorder or body dysmorphic disorder sees, but that does not change their reality and how they perceive themselves.
What helped me was gradually changing my thoughts and behaviors towards eating, exercise and my weight — aspects of cognitive behavior therapy that someone who has an eating disorder may be prescribed. Changing your thoughts and behaviors ingrained in your mind is hard and the process takes time, but is worth the effort. For those who suffer from body dysmorphic disorder, remedies that WebMD describes as most common include cognitive behavior therapy, certain antidepressants and support.
I still struggle with my self-perception, but I have made myself aware of the habits that lead me back to obsessing about my weight. I try to view eating and working out as goals towards health — not appearance. I constantly try to remind myself that my health matters, not the number on the scale or on the tag of my jeans.
My weight does not define me, but my overall health does and that is what I try to focus on — both my physical and mental health. Your appearance does not define you either. If you think you suffer from even the slightest degree of an eating disorder or body dysmorphia, I encourage you to find out more about it and talk to someone, a professional or even someone who has experienced a disorder of this nature.
Your mind is a very powerful thing, please take care of it and treat yourself kindly.