The power online conformity has over us 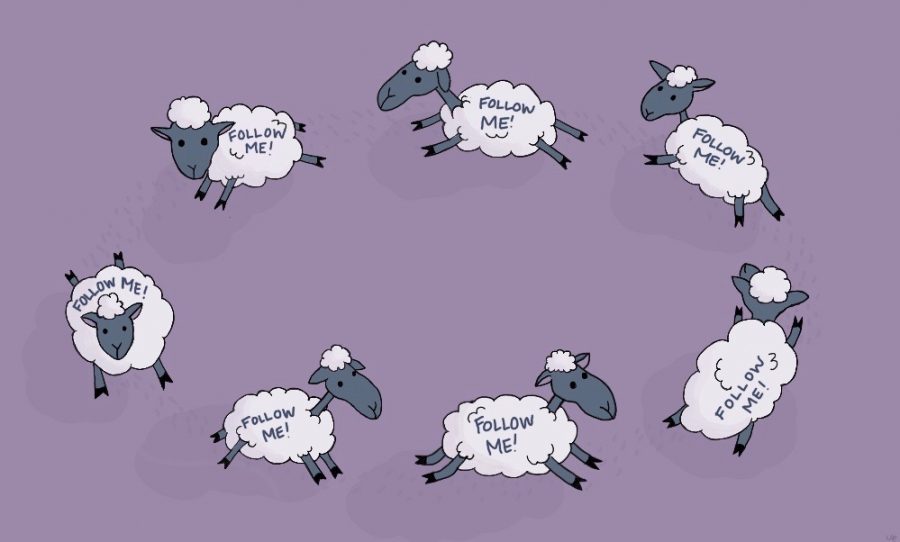 In 1815, German philosopher Arthur Schopenhauer wrote an essay titled “Thinking for Oneself” in which he essentially explored the polarity between the practice of self-thinking and adherence to social knowledge. He asserted that reading is a replacement for thoughts because the work of thinking is almost entirely done for the reader in a manner not their own. The “book philosopher” merely accepts outside opinions, repeating the same mental process made by other people. Though Schopenhauer’s view may seem contradictory at first, he tried to convey that true knowledge and individuality can never be obtained if we become too entrenched in the thoughts of others because we then only envision the world with their opinions. To put it bluntly, almost anyone can obtain knowledge from the most promising educator and even follow their footsteps exactly — but not many can think for themselves.

More than 200 years later, modern society still struggles with the concept of self-thinking. Because we are currently living in the digital age in which technological advances have genuinely altered our way of life, we crave shortcuts and immediate answers to our questions and problems. Though these solutions can be extremely helpful in some cases, if not used correctly, we’re unconsciously dumbing down our ability to rely on our instincts. Naturally, if our thinking skills are left to decay, not only are we starting to put our trust on other people’s narratives to construct our perceptions, but we’re also strengthening their thoughts and opinions while weakening our own. And with a weakened ability to formulate original thoughts, we’re more apt to adopt herd mentality.

Moreover, due to increased accessibility to social media, people can now have instant, direct connections with others without even having to build a rapport. We construct our own digital friend group by practicing selective exposure in which we follow certain people who share the same personality and interests as us. As social creatures, whether we realize it or not, we constantly seek affirmation from these individuals when they give their little approvals in the form of likes, shares and retweets — today’s dopamine producers. When faced with opposition, we have the tendency to conform to the same individuals because we don’t want their little approvals to disappear.

Furthermore, a field experiment conducted in Sweden in 2012 by Johan Egebark and Mathias Ekström observed whether Facebook users were more prone to like an update if someone else had already done so.

They found that the probability of a person liking a Facebook post “increased if 3 unknown users had also ‘liked’ the update.” This indicates that individuals are more likely to like a post if a certain number of people have already done so, amplifying the fact that online conformity can also be linked to numbers.

As a heavy Twitter user, I, too, notice a similar pattern of conformity whenever I scroll through my timeline. It is apparent that most individuals on this platform are solely driven by societal norms; one day, they show their fondness for a certain topic, and the next day, they agree with others who disapprove of it. Tweets that generate massive retweets and likes seem to be more powerful than their own beliefs. It’s easy to sway the opinions of these people because they merely follow trends that come and go without having strong foundational values and the ability to think for themselves. Although it is sometimes okay to observe and follow what others are currently doing because this increases our knowledge about our surroundings, establishing our own beliefs and standing firm in them should be a primary matter; follow the trends you genuinely believe in rather than the ones everyone blindly follows. Don’t be a carbon copy of a copy. Don’t be part of the herd.