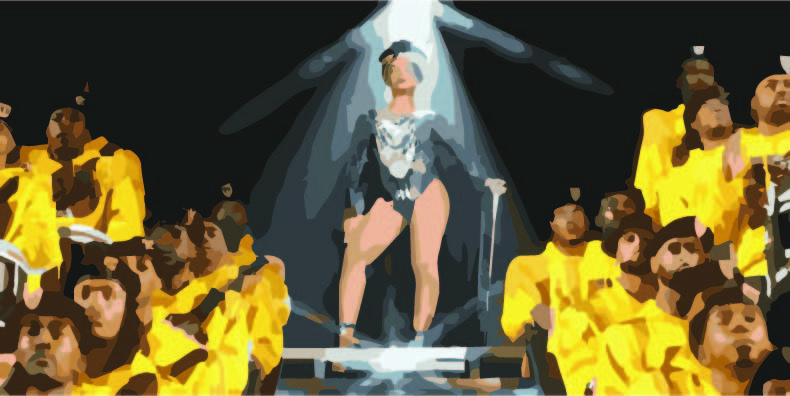 Beyoncé’s 2018 Coachella performance was a cultural reset in terms of magnitude and reach. Her two-hour performance is regarded by fans and critics alike as the best performance of her career and one of the best performances of all time. Now known as “Beychella,” the performance hosted around 500,000 people in person and 41 million people via livestream to watch Beyoncé do what Beyoncé does best. Beyoncé is a known perfectionist and it shows in many aspects of the performance. Everything from the choreography to the costume design was flawless. In addition to performing, Beyoncé wrote, directed and produced the Netflix documentary “Homecoming: A Film by Beyoncé” and co-directed the music and performance itself. Overall, Beychella showcased the many facets of Beyoncé’s talent and flawlessly highlighted black culture on one of the biggest stages in the world.

Beyoncé was the first black woman to headline Coachella, and, in doing so, she didn’t hold back on demonstrating all that black people are capable of when given a platform. The Netflix special of her performance gives viewers an in-depth look into the intricacies of the performance, alternating between her two back-to-back Coachella performances while Beyoncé narrates the process behind the scenes.

In the Netflix documentary, she explains, “Instead of pulling out my flower crown, it was more important that I brought [black] culture to Coachella.” Beyoncé’s Coachella performance was a celebration of black art in its entirety. The performance featured many “characters,” as Beyoncé refers to them, ranging from dancers, steppers, back up singers and more that each brought a different artistic element to the performance. The stage was occupied by around 200 characters along with Beyoncé. Combined, they exuded, fun, unity and talent on the highest level.

At the end of the documentary, Beyoncé writes, “There is something incredibly important about the HBCU experience that must be celebrated and protected.” Beychella highlighted hard work, dedication and perseverance, all traits that encompass what blackness is about: “finding beauty in the struggle,” as Beyoncé explains it. HBCUs in America were created out of African Americans’ desire and determination to learn. When we were denied in white spaces, we created our own, and that resilience is what Beychella is about. Beyoncé states, “[with the Coachella performance,] we were able to create a free, safe space where none of us were marginalized.” Now, every time anyone watches her Coachella performance on Netflix, for two-and-a-half hours, they, too, can feel liberated from oppressive boundaries.

Every time I watch Beyoncé’s Coachella performance, I’m transported to a reality where I have no limits, no marginalization. I feel free. I feel seen. I can dance around my living room or bedroom and simply be myself. I am liberated and connected to this masterpiece of a performance Beyoncé created, and I’m grateful she shared it with the world. The kind of performance Beyoncé created with Beychella was a culturally and historically unprecedented event. Additionally, thanks to Netflix, the performance is cemented into relevance, so people can relive its excellence forevermore.