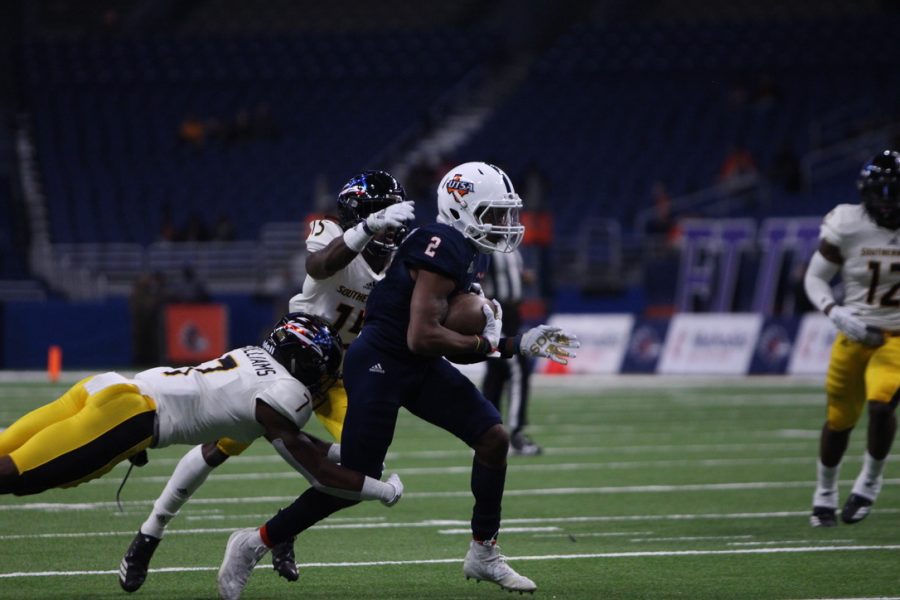 Sheldon Jones breaking a tackle during a home game against the University of Southern Miss. The Roadrunners have played every home game in the Alamodome since they began play in 2011.

The Alamodome is a wondrous sight to behold. One of the most identifiable landmarks of downtown San Antonio, it plays host to a number of major events every year that serve as the nexus of entertainment in San Antonio. One of its foremost duties is to play host to home games for Roadrunner’s football team, but should that change?

There is little doubt that the Alamodome is among the best stadiums in Conference USA with a seating capacity of 64,000 that ranks second in C-USA, coming in after the University of Alabama at Birmingham’s (UAB) Legion Field. There’s no argument that the Alamodome is able to support a devout fanbase and create a wild atmosphere. Though the Alamodome was originally built to entice an NFL franchise to move to San Antonio, the plan has been so far unsuccessful for the city, but as a byproduct, the stadium has many amenities not seen at other C-USA facilities. A number of programs would be more than happy to play in a facility like the Alamodome, so why then is the Alamodome a hindrance to UTSA football?

It comes down to logistics and a case of a small fish trying to exist in a big pond. A 64,000-seat college stadium sounds impressive, and it is when looking at it empty and visualizing a packed stadium, but it becomes far less impressive when examining the actual numbers of attendance. When 64,000 fans are packed into the Alamodome, such as during the Alamo Bowl, the atmosphere inside the stadium is absolutely electric. This isn’t the case for UTSA home games, however. During the final year of Frank Wilson’s tenure as head coach of the ‘Runner’s, attendance reached all-time lows with the home game against UAB recording the lowest home game attendance in UTSA’s history. When a large stadium, especially one based inside a dome, is jam-packed, the atmosphere is incredible. However, when attendance is low, the opposite is very much true. A stadium of that size only being filled to around 25% capacity leads to the facility feeling cavernous and empty. The band section loses its ferocity, and no matter how hard the crowd cheers, they lack any and all ability to fill such an immense void to overwhelm the opposition. All told, the Alamodome also lacks a certain amount of college football atmosphere. There’s a certain connection between most universities and their stadiums that UTSA and the Alamodome lack. The Alamodome was not constructed to house UTSA football, and it feels like it.

Another major obstacle the Alamodome presents to the growth of UTSA football is the apathy it has grown among UTSA’s student fanbase. While in attendance at numerous home games last season, I observed a student section that was woefully empty. This can be attributed to a number of factors, but one of the biggest is the fact that the Alamodome lies 25 minutes away from Main Campus by car. Not all students who attend UTSA have access to a car, and although UTSA provides services through VIA to shuttle students to the game, there’s just a number of hoops to jump through that obviously turns away many students. A healthy college football program starts with an engaged and passionate fanbase. Unfortunately, it appears that the Alamodome is a facility that actively works against engaging UTSA’s student fanbase.

Because of all of these factors, the Alamodome just doesn’t feel like a facility that’s suited for hosting a C-USA football team. If the stadium was located on campus, this may be a different story, but that’s not the case. It may be time to begin to consider alternatives. A football stadium situated on campus with a seating capacity of about 30,000+ may actually serve the interests of UTSA in a much better fashion than the Alamodome can provide. A stadium at capacity with an engaged student section is going to produce a much better atmosphere than a large indoor stadium filled to 25% capacity. The chances a student is willing to take time out of their busy day to commit to a half-hour trip minimum each way to attend a UTSA football game at the Alamodome versus a game played in an on-campus stadium is no contest. Convenience is a huge factor when it comes to decisions such as these, and if the UTSA football program wishes to grow, while it may seem counterintuitive, a step back into a smaller-scale stadium may actually help.

While this is a sound idea, one major factor lies in the way of this proposal: finances. Constructing a stadium, especially one expected to support a division one college football team, is expensive. At the best of times, it’s a decision that a university weighs heavily against the expected gain from such a move, but we don’t live in the best of times. UTSA has already begun to try to limit the damage from the COVID-19 crisis, and in times like these, they won’t be interested in putting massive funds into building an on-campus stadium to house a football team that already inhabits a stadium that, on paper, is much better than anything UTSA could realistically build on their budget.

While it would likely be in UTSA’s best interest to construct a stadium on campus, the reality of the situation is that such an event is unlikely to occur in the near future. The task of creating an electric atmosphere that has a student body and near-capacity stadium cheering on our ‘Runners will likely fall to new head coach Jeff Traylor, who must construct a program that will entice the student body to make that off-campus trip. Even so, the chance to possess a stadium we can fully call our own would help grow the program in numerous ways, and if UTSA football ever wants to move forward, it is in their best interest to take a step back.