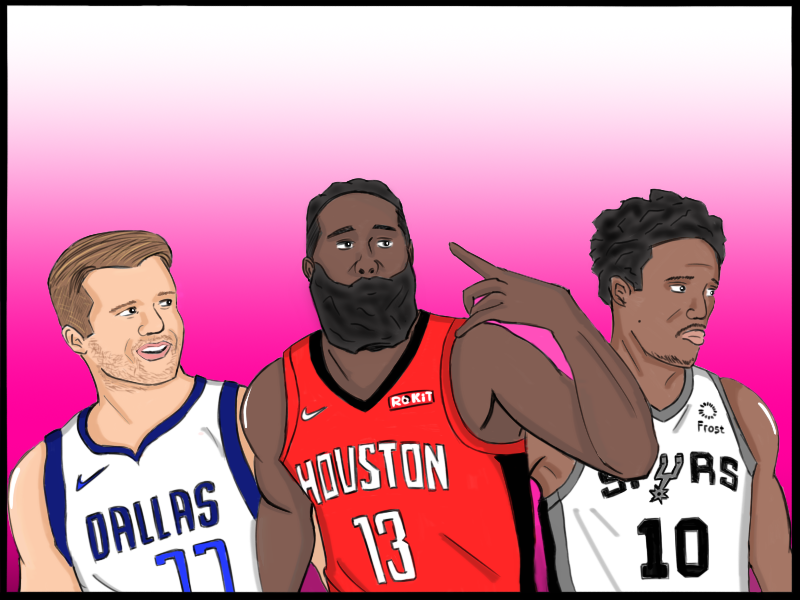 After many months of speculation and anticipation, the NBA has finally made its long awaited return. The Orlando bubble seems to be working: 22 teams have arrived and will continue the season from where they left off in March. All three Texas teams will be participating in the restart. We discuss each team’s chances for a successful trip to Orlando below.

The Mavericks enter the Orlando bubble seventh in the Western Conference with a 40-27 record. Despite their seven-game lead over the eighth-seeded Grizzlies, they’re not assured a playoff spot just yet. Sitting four games back from the third-seeded Nuggets, the Mavericks have the potential to drastically improve their seeding if they can jump past the Jazz, Thunder and Rockets.

The Mavericks’ schedule lies somewhere in the middle difficulty-wise, starting with the Rockets and followed by games against the Phoenix Suns and Sacramento Kings. The move to a neutral court may actually benefit them since they compiled a better record on the road (21-12) than they did at home (19-15). The schedule hits its toughest stretch with back-to-back games against title contenders, the Los Angeles Clippers and Milwaukee Bucks, before a game against the fourth-seeded Jazz. The Mavericks will then finish up their eight-game slate against the Trailblazers and Suns. Conservatively, The Mavericks are likely headed to a 4-4 finish for the regular season, the seventh seed, and a date with the Clippers in the first round of the playoffs.

The Mavericks lost the abbreviated season series to the Clippers 1-2. If the Mavericks are going to make a run, they’ll be heavily reliant on their offense, which ranks first in the NBA in offensive rating. Second-year superstar Luka Dončić and fellow European star Kristaps Porziņģis will be the driving engines if Dallas is to make a run. Dončić is enjoying a breakout season, following a rookie of the year campaign last year averaging 28.7 points, 9.3 rebounds and 8.7 assists per game. The Mavericks lost the services of a key piece prior to entering the bubble as newly acquired starting center Willie Cauley-Stein, brought in to replace the injured Dwight Powell, opted out of the season because he is expecting a child in July. Complemented by strong supporting guard play from Jalen Brunson, Tim Hardaway Jr. and Seth Curry, the Mavericks have the firepower to score and stay in games. The Mavericks are probably a year too young for a serious run at the title; they’ll more than likely bow out to the Clippers in round one. Look for the Mavericks to make it competitive, though: They have potential to go on a run if Dončić takes his game to an even higher level.

The Rockets are currently slotted at sixth in the Western Conference with a 40-24 record. The first seed is out of the question, but the Rockets are only two games behind the third-seeded Nuggets. When comparing their schedules, the Rockets have a slight edge. Their eight-game schedule includes dates with the league-leading Bucks and Lakers, but the small ballers should be favored in their six other games. The Nuggets, on the other hand, have a brutal stretch ahead, highlighted by games against the Lakers, Clippers, Heat, Blazers and Thunder. When the dust settles, it wouldn’t be surprising to see the Rockets in the third or fourth seed.

Barring any wild movement in the standings, the seeding range leaves three likely first round opponents: the Jazz, Thunder and Nuggets. Utah is missing Bojan Bogdanovic and will rely solely on Donovan Mitchell to provide their scoring punch. The Rockets have a 2-1 record against Utah, and the game they lost came on a ridiculous buzzer beater by Bogdanovic. Utah would be the ideal first-round matchup.

Denver and Oklahoma City provide a tougher challenge. The Rockets and Nuggets split the season series 2-2 while the Thunder hold a 2-1 advantage. Both of these playoff series should be competitive, and it wouldn’t be surprising to see either squad take the Rockets to six or seven games.

Despite their defensive problems, the offensive talent of James Harden and Russell Westbrook should be enough to push the Rockets forward. Small ball works, but its problem lies in the wear and tear that comes with constantly having to guard bigger and stronger players. Bruisers like Steven Adams and Nikola Jokic will test Houston’s endurance. Denver’s extremely tall lineup could also cause trouble in an extended series. Any long-term fatigue or injury caused by constant exertion on defense will sink offensive production. That being said, the break afforded to the Rockets by the pandemic gave them time to rest and recover, so they should be starting at full strength, despite some potential rustiness. Their success in this year’s playoffs depends entirely on how long they can endure defensively. A first-round victory should be expected, and a second-round victory wouldn’t be entirely surprising, especially since the Lakers have recently lost both Rajon Rondo and Avery Bradley. The Clippers pose the greatest challenge, and it seems likely that the Rockets would have a hard time getting past them. A realistic ceiling on this team’s postseason hopes is the conference finals, but small ball has the potential to surprise the league if it proves to be sustainable.

The San Antonio Spurs are seeded at the 12th spot heading into the bubble, making them the second-to-last team in the condensed Western conference. While most Spurs fans are prepared to say goodbye to their twenty-two year stretch of playoff appearances, there is still some hope. The Spurs are not only four games out from the eighth seed but also only half a game away from the ninth seed. Being the ninth seed in a typical NBA season is worthless, but that’s not the case this year.

The plan is for each of the 22 teams to play eight “seeding” games to determine playoff standings with a possible play-in series between the No. 8 and No. 9 seed of each conference if the ninth seed is within four games of the eighth seed.

While this new rule has given the Spurs a glimpse of hope, the road to the postseason isn’t going to be easy. Three of the Spurs’ eight games will be against teams also competing for the eighth and ninth seeds, and the other five games will be against teams that all sit at or above .600. Simply put, it doesn’t look good for the Spurs. For all intents and purposes, every game from here on out is an elimination game for the Spurs, as even one loss could end their playoff hopes.

The bad news doesn’t end there: If the Spurs do make the playoffs, they will be coming in as the eighth seed, which means they will most likely have to play the Los Angeles Lakers. I don’t really see any way the Spurs win that series; a first round exit is very likely. While prospects look bleak, there is still a chance the Spurs can break the record for the most consecutive trips to the playoffs. If they made the playoffs this year, it would be their 23rd straight appearance, breaking a tie with the 50-71 Philadelphia 76ers. The biggest strength the Spurs have over these younger teams is their veteran core. The vets understand how important each game is, and that kind of focus could very well be what they need to break the record.