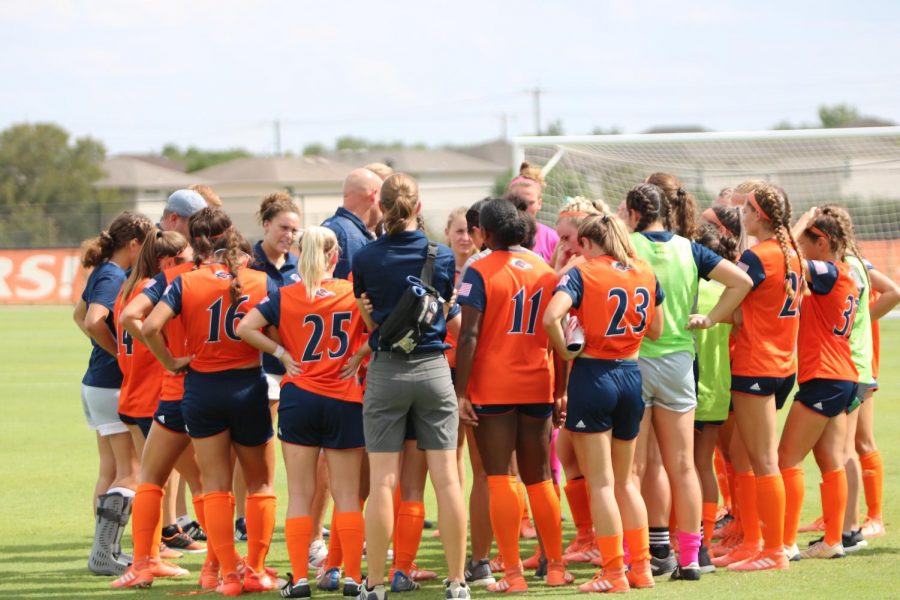 UTSA Women's soccer huddles up after their matchup against the Rice Owls during the 2019-2020 season.

The Conference USA (C-USA) Board of Directors announced the delay of fall sports, excluding football, on Friday, Aug. 21. This decision was made after the NCAA Division I Board of Directors chose to postpone the fall championship competitions until Spring 2021. Because of the delayed C-USA championships, UTSA women’s soccer and volleyball team athletes will be allowed to compete for the NCAA Championships in addition to the conference competition.

The NCAA board voted by a blanket waiver on Friday to allow all fall sport athletes an additional year of eligibility. This provides athletes another year of competition after seasons that are canceled or delayed due to the COVID-19 pandemic. Additionally, the ruling prohibits schools from not awarding scholarships to athletes whose seasons were affected by the pandemic.

Roadrunner football will continue its season as planned. The ‘Runners have added a home game against the Stephen F. Austin Lumberjacks, slated for Sept. 19. This game will mark the first competition in the Alamodome for the ‘Runners and first year head coach Jeff Traylor for the 2020-21 season. The first matchup of the season for the ‘Runners will be the I-35 Showdown in San Marcos against the Texas State Bobcats on Sept. 12.

The ‘Runners have added a rematch in the Alamodome against Army West Point on Oct. 17 in replacement of the conference game against the Old Dominion Monarchs. This addition to the schedule comes after the Monarchs canceled their fall sports.

Schedules for the postponed sports season have yet to be announced.