UTSA professor first subject in COVID-19 vaccination trial: ‘I get to be a part of the solution’ 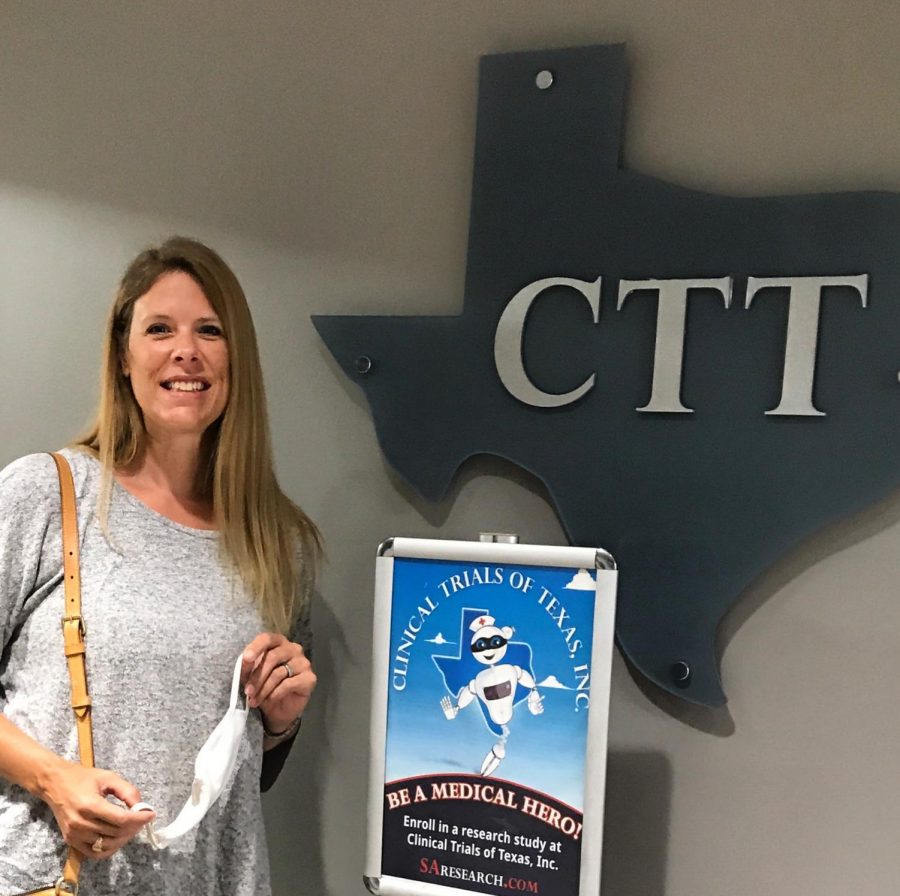 Mary Dixson is not afraid to be singled out. When thousands of lives are on the line, she believes there is no better time to step up and be an advocate for those unable to use their voice. Although she does not know what will come after her decision, Dixson found herself ready to take on any challenge that this process might bring.

“My initial thought was, ‘Why wouldn’t it be me?’” Dixson said. “‘Whose job is it? I’m a healthy woman and we all benefit from vaccines. Why shouldn’t it be me? Somebody has to do it.’”

UTSA’s distinguished senior lecturer Mary Dixson is the first-ever subject for the COVID-19 vaccination trial with Clinical Trials of Texas, Inc. Because the vaccine for COVID-19 is the key to returning to some degree of normalcy we all once had, it is imperative that the trials run smoothly. After seeing an ad about the trial through a social media post, Dixson made the decision to participate.

She was screened via phone call, which entailed answering questions about underlying conditions, and waited nearly a month before she got the call stating that she would be part of the trial. Not knowing whether she would be injected with a placebo or the actual vaccine, Dixson courageously agreed to be a part of this unprecedented experience. She had her first injection on July 29 and her second on Aug. 18.

The volunteers participating in the trial will not be injected with a live virus but with antigens that will help make antibodies to fight the virus. They will be monitored for two years after receiving two injections of antigens. Researchers are looking for people over the age of 18 who have not had COVID-19 to participate in the trial. Essential workers are encouraged to volunteer, as well as those who might have underlying conditions such as diabetes or heart disease.

To allow people to understand the intricacies of this trial, Dixson has made several social media posts documenting her progress. The researchers have also asked her to keep a seven-day post-injection diary documenting any outstanding symptoms such as redness, fever or extreme soreness that might result from the shot. Given her history free of allergic reactions to any vaccine, it was no surprise that Dixson showed no side effects after her initial appointment.

“The initial appointment was a very long one because when you’re the first, they’re trying to get all of their protocols right,” Dixon said. “There’s lots of double-checking in order to make everything go smoothly, which is the interesting part about being the first: You’re the new one, and no one has tested this before.”

Taking a risk like this did not cause nervousness for Dixson but a major sense of curiosity. Everyone involved in the trial is certain of its safety, so the only worry Dixon had was the nagging thought that she will most likely never know if she was given saline or the real vaccine.

“It’s just that curiosity that I think anyone would feel — you’re sort of just dying to know. It’s a fifty-fifty flip of the coin. Unless you get COVID, you won’t know, and even then, it’s a blind study, so we will just never know,” Dixson said.

Normalizing the vaccine process is a salient motive for Dixson as we enter the school year. As students move back to campus and gather, Dixson wants to show them that a real person — a professor they know — is participating in a trial for a vaccine that will save lives. Dixson’s contribution is especially important to students who want to return to their normal, sociable routines.

“If a vaccine can make socializing a safer process, then I want to do everything I can to promote it to my students,” Dixson said.

As we continue to face a virus that has influenced a state of worldwide long-term panic, finding volunteers like Mary Dixson who want to serve as an advocate for powerful change in every community will save millions of lives. The vaccination trial is only one step in the process; we can all contribute by simply wearing our masks and social distancing.

Dixson will return to Clinical Trials of Texas, Inc. on Sept. 16 for more research. More updates will follow as she progresses through the trial.