In Retrospect: What the Four Major Sports Leagues Have Done for Social Justice 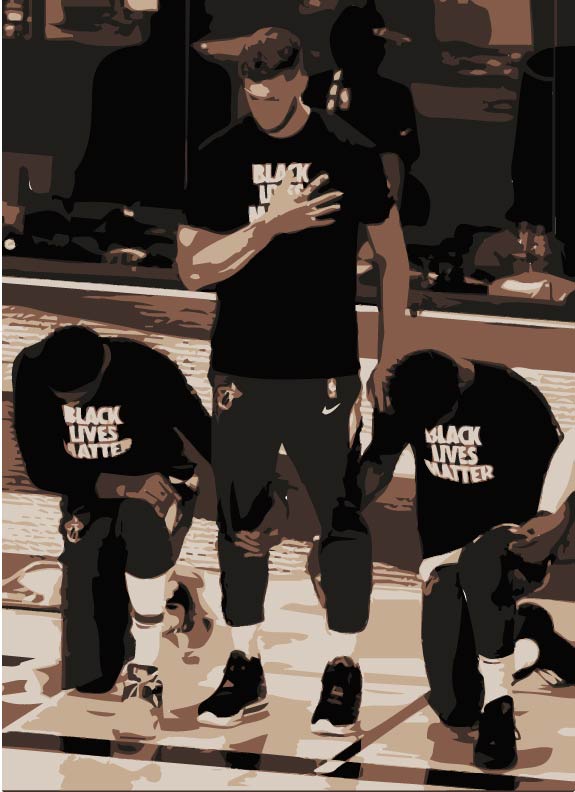 Last week, the NBA playoffs came to a halt as players collectively began to strike in response to the police shooting of Jacob Blake in Kenosha, Wisconsin. For a 24-hour period, there were talks that the NBA playoffs may be abandoned, as players wished to return to their communities.

Eventually, the situation stabilized, but emerging from the discussions was an NBA announcement of a number of new initiatives to further promote social justice. Among the initiatives were the immediate formation of a social justice coalition consisting of representatives from players, coaches and team governors and a commitment to work with local election officials to convert NBA arenas into voting facilities for the 2020 general election. The NBA has also committed to working with players and network partners to create advertising spots for the remainder of the playoffs that will promote engagement in national and local elections. With the NBA upping their involvement in social justice causes, the NFL, NHL and MLB have increased their participation as well.

The NFL saw an earlier incarnation of this movement. Colin Kaepernick’s demonstrations of kneeling during the national anthem to protest racial inequality and police brutality set in motion many of the current initiatives seen today. Although the NFL grappled with this issue at times, the league has taken some concrete steps since Kaepernick first began protesting, most notably by launching their own social justice platform “Inspire Change” in partnership with the Players Coalition, an organization founded by current and former NFL players that pursues social justice issues.

Regarding plans for the upcoming season, the NFL has announced that they will play “Lift Every Voice and Sing” before the season opening games during week one, and players and coaches will have the option to wear hats as well as helmet decals or patches that honor victims of systemic racism. While the anthem controversy has not faded entirely — notably, Cowboys owner Jerry Jones has remained inconsistent in his messaging — the league as a whole is, on paper, far more accepting of the movement than they were in its infancy.

The NBA has jumped back to the forefront of the conversation due to their recommitment to social justice causes. Prior to their recent guarantees, the NBA has supported their players’ right to protest and spread messages. One notable example predates Kaepernick’s protest by nearly two years: NBA players across the league wore “I Can’t Breathe” shirts during pregame warmups in December of 2014 following the death of Eric Garner in New York City. More recently, in the wake of George Floyd’s death, the NBA restarted their season in an anti-COVID-19 bubble heavy on social justice messaging and imagery. The court used in the bubble prominently features the phrase “Black Lives Matter,” and various social justice-related messages were featured on the back of players’ jerseys.

MLB’s efforts are relatively new because they did not experience the same widespread anthem protests early in the current movement like the NFL and NBA. Former Oakland Athletics’ catcher Bruce Maxwell was the only player to kneel for the anthem in MLB prior to the 2020 season.

In the aftermath of George Floyd’s murder, however, MLB teams knelt during the anthem, holding a black rope while a special video message recorded by Morgan Freeman was played on each stadium’s video board. In addition, the initials for Black Lives Matter were stenciled onto the pitcher’s mound for all games on opening weekend. The MLB is also allowing players to wear cleats featuring social justice messaging, a turnaround of longtime cleat restrictions by the MLB. In the past few days, MLB has entered a new phase of social justice focus, as multiple games were postponed while players showed solidarity with the NBA’s strike.

The NHL is a relatively new entrant into social justice issues in comparison to their peers. J.T. Brown of the Tampa Bay Lightning raised his fist before the national anthem for a game in October of 2017, but that was as far as demonstrations went in the NHL prior to this year. Upon the NHL’s return following the season’s COVID-19 postponement, a number of gestures were put in place by the NHL to promote social justice. Notably, the message “#WeSkateForBlackLives” was displayed on digital video screens in both stadiums being used by the NHL. In addition, players wore helmet decals displaying the message “#WeSkateForEquality.”

The NHL broke from the other leagues and did not postpone any games the day of the NBA’s strike, instead holding a moment of silence before the national anthem. The NHL, however, postponed games the following day.

Former and current NHL players of color have come together to form the Hockey Diversity Alliance, which states their mission on their website: “To eradicate systemic racism and intolerance in hockey.” The Alliance had called on the NHL to postpone games on the same day as the NBA, but the NHL did not do so until the next day.

Each of the major sports affiliations have addressed social justice in differing ways, and only time will tell what further steps are taken.