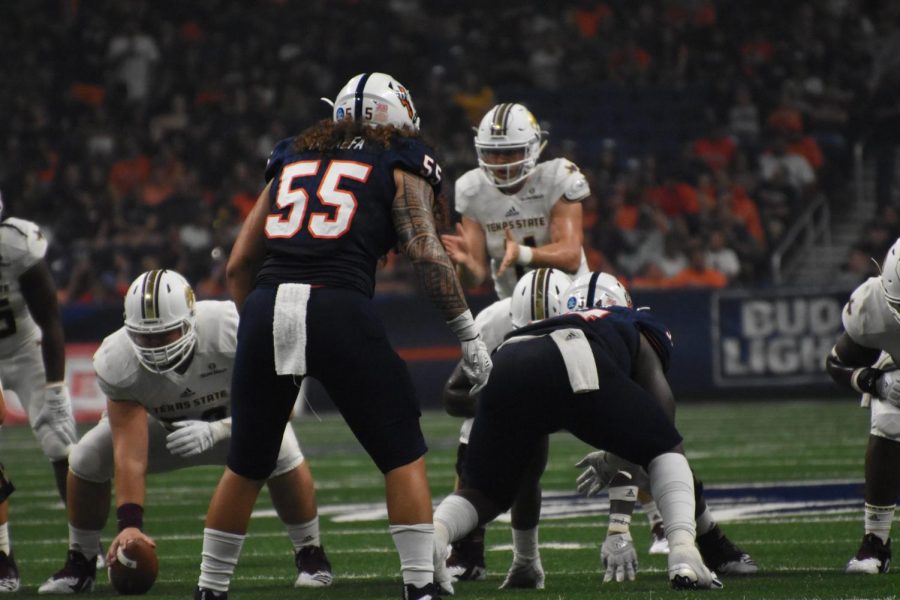 Former UTSA linebacker Josiah Tauaefa stares down Texas State's quarterback before the snap in a 2018 game. The 'Runners won 21-25.

This Saturday, the UTSA Roadrunners will play the Texas State Bobcats. The game will kick off at 2:30 p.m. and will be the start of the ‘Runners season.

The I-35 Rivalry is a highly anticipated game for both the fans and the players. The ‘Runners are currently looking to keep their winning streak against Texas State alive, as UTSA football has never dropped a game to the Bobcats. The last time the two teams played in 2018, the ‘Runners won, 25-21, at the Alamodome. They will have to win on the road this year, as the game will be held at Bobcat Stadium. The last, and only, time the ‘Runners played at Bobcat Stadium was 2017; the ‘Runners blew the Bobcats out, 44-14.

According to CBS Sports, Texas State ranks 75th in the nation coming into this game and UTSA ranks 73rd. The Bobcats’ record currently stands at 0-1, their first loss coming to Southern Methodist University (SMU). While this outcome was unsurprising, the game was closer than expected. SMU currently ranks 26th in college football but only beat the Bobcats 31-24. While this can be partially chalked up to rust since the game was the season opener for SMU, the final score was too close, indicating that Texas State could be a stronger team than many people expect.

UTSA is also a different team from before, the ‘Runners recently making a switch at the head coaching position. The ‘Runners’ solution to their struggling offense and back-to-back losing seasons is Jeff Traylor. Traylor is coming from Gilmer High School, which, in 2014, put up the all-time second highest points in a single Texas high school football season. Gilmer High scored 950 points in only 16 games, which averages out to a whopping 59.4 points per game.

Though coaches making the transition from the high school to collegiate level do not always pan out, Traylor is no stranger to college football. Traylor has worked with SMU, the University of Arkansas Razorbacks and the University of Texas. While Traylor was at UT, he coached the wide receivers and tight ends and helped boost the Texas offense to number 16. All this being said, now is the time to see if Traylor can turn UTSA’s 107th ranked offense into something special.

UTSA is getting a good amount of starters back on offense. The quarterback position is the outlier however, as the starter out of the group of Lowell Narcisse, Frank Harris, Jordan Weeks and Josh Adkins is still up in the air, and could feature a newcomer (Adkins). The ‘Runners will also be getting their leading rusher back in Sincere McCormick, who rushed for 983 yards and eight touchdowns last year.

With what looks to be a promising offense this year, the ‘Runners will need their defense to step up as well. The ‘Runners’ defense led the conference in tackles for loss last year, even though they had problems stopping the run and were sometimes beat off the line. Thankfully for UTSA, eight of the top 10 tacklers from last season will be returning, including six starters. The strength of the ‘Runners’ defense this year will come from their secondary; three safeties and a pair of cornerbacks will return to the lineup. In addition to these returning players, the ‘Runners will also be welcoming some new faces onto the field. Hopefully this combination brings a breath of fresh air into the UTSA football program.

UTSA is favored against the Bobcats, coming into this game with a 58% chance of winning and a +7 point spread, according to ESPN. With this matchup being the season opener for a team with a new head coach, possibly a new quarterback and a rivalry game, there is a lot of pressure on players to perform.