For the program’s future, Jordan Weeks needs to start for UTSA 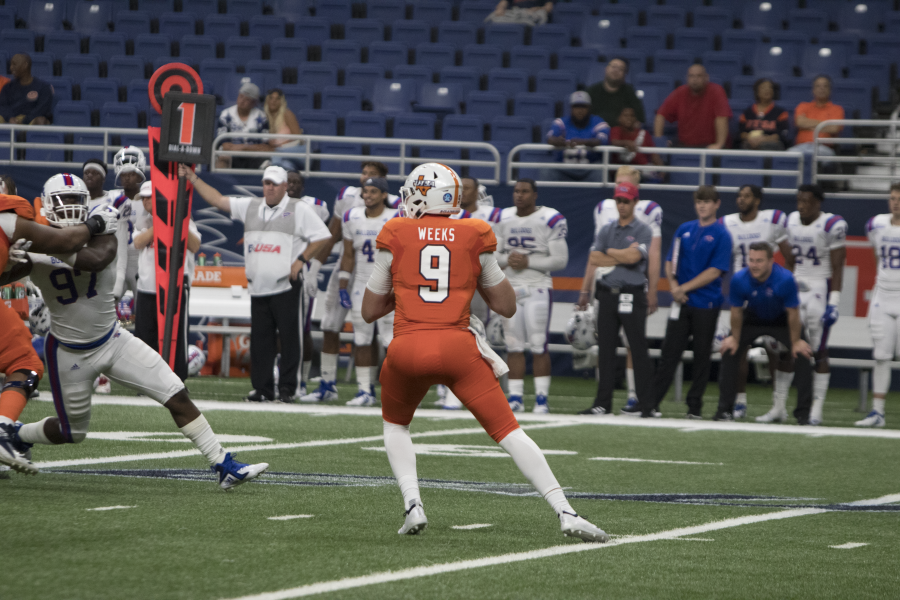 Quarterback Jordan Weeks looks to pass in a game against LA Tech during the 2018 season.

UTSA is set to begin its season this Saturday on the road in San Marcos against Texas State, but with only a few days left before the season kicks off, the Roadrunners have yet to officially name a starting quarterback for the season opener. The competition for the job appears quite fierce with numerous viable options for head coach Jeff Traylor to pick from. With a competition as close as this, however, Coach Traylor should make the decision that is best for the long-term health of his program, and that is to award the starting quarterback job to Jordan Weeks.

Harris appeared in four games last year for the ‘Runners before being lost for the year due to injury. He performed well in limited action, completing 72.5% of his passes and throwing for 486 yards, three touchdowns and two interceptions. Narcisse took over in the aftermath of Harris’ injury and saw the most action of all UTSA quarterbacks last season. Appearing in 11 games, Narcisse completed 53.2% of his passes for 1,226 yards, eight touchdowns and five interceptions.

Adkins brings the most starting experience of the group to the table, having started 20 games for New Mexico State University (NMSU) before transferring to UTSA. Last season for NMSU, Adkins completed 62.9% of his passes for 2,588 yards, 14 touchdowns and 15 interceptions. Adkins is also the first quarterback brought in by Coach Traylor.

Finally, Weeks stands out as the youngest of the group experience-wise as a redshirt junior, and that is what sets him apart. Weeks appeared in three games last year, completing 57.6% of his passes for 451 yards, two touchdowns and three interceptions.

With no clear superior option statistically, it is important to consider the bigger picture when deciding who should start for the ‘Runners this season. While Harris came into last season as the starting quarterback, he has unfortunately been plagued by injuries that have forced him to miss large stretches of time in his college career. Narcisse displayed an excellent ability to take off and use his legs to gain yards last season, but he proved to be inconsistent through the air, something the quarterback position can not afford this season. Adkins has the most experience starting games under center, but coming in as a transfer this season may be asking a lot of him, and the number of interceptions he threw last year was concerning.

This brings us back to Weeks. Many young quarterbacks in college football have shown the benefits of being put in control of the offense early in their college careers, and Weeks has an opportunity to do the same. With an extra year of eligibility over his competition, it’s in the ‘Runners’ best interest to give Weeks the keys to the offense so he can learn and grow through a full season of game action. Weeks showed he has the ability to spark the offense late last season with the ‘Runners scoring more than 20 points in the two games of the season when he was featured prominently, the only time the ‘Runners offense achieved this all last season.

Given a full year, Weeks could help the ‘Runners’ offense become much more consistent in putting points on the board. In what figures to be a formative year for the Coach Traylor regime, Weeks stands as the option that presents the most long-term benefits for the health of the program.