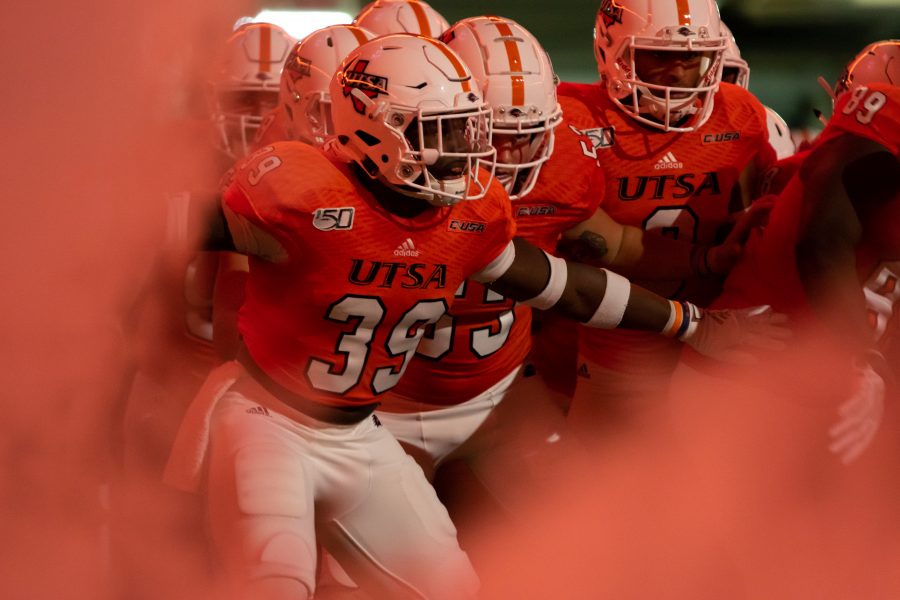 This Saturday, UTSA football (1-0) will kick off their home opener and look to continue their hot start to the year against their FCS opponents, the Stephen F. Austin Lumberjacks (0-1). The Jeff Traylor era is officially underway at UTSA and got off to a thrilling start last week in the I-35 Rivalry game against the Texas State Bobcats (0-2). Fans were treated to a rollercoaster of emotions in a game that saw the Roadrunners jump out to an early 24-7 lead at halftime only for the Bobcats to come roaring back. But thanks to some shaky Texas State place kicking, and UTSA kicker Hunter Duplessis’ walk-off 29-yard field goal in double overtime, the ‘Runners gave Jeff Traylor his first win at UTSA with a final score of 51-48.

This week, the ‘Runners turn their attention to Stephen F. Austin, an FCS school that the ‘Runners have no prior history against in football. The ‘Runners have compiled a 9-5 all-time record against FCS schools and will look to keep that winning trend going against the Lumberjacks. The Lumberjacks saw their first action of the season on September 5 against the University of Texas at El Paso Miners (1-1), falling to them by a final score of 24-14.

The game against Texas State brought a number of positives which the ‘Runners will seek to carry over into their game against the Lumberjacks, but also a number of mistakes they will attempt to clean up as well. They will look to continue to get into the backfield and disrupt plays, seeing as they currently rank first in the nation in tackles for loss with 14. UTSA will want to emulate their performance on defense in the first half of the Texas State game in which they stifled the Bobcats before seeing their containment of the Bobcats’ offense crumble in the second half. The Lumberjacks were only able to compile 230 yards of total offense against the Miners, so it’s crucial that the ‘Runners regain their form from the first half of the Texas State game to completely shut down what should be an overmatched opponent.

It came as no surprise to see Coach Traylor, previously the running back coach at Arkansas, lean heavily into the run game all day long against the Bobcats. Reigning Conference USA Freshman of The Year Sincere McCormick looks set to continue to build off his spectacular play last season, as he sliced and diced his way through the Bobcats’ defense en route to a new school record for rushing yards in a single game with 197. This also ranks McCormick second in the nation in rushing yards just behind the University of Alabama at Birmingham Blazers’ Spencer Brown, who has 201 yards through two games.

Frank Harris also contributed heavily on the ground, emerging from a spirited quarterback competition to regain the starting job he lost last year due to injury. Harris rewarded Traylor’s decision by showing himself as a true dual-threat quarterback, finishing the game with 52 yards on the ground and three rushing touchdowns while also completing an efficient 74.1% of his passes for 169 yards and a touchdown. The Lumberjacks allowed 152 yards on the ground against the Miners, who currently rank 34th out of 40 eligible teams in rushing offense, so the ‘Runners will look to enforce their will in the trenches and control the game on the ground.

Special teams are one area the ‘Runners will have to improve on from last week. The ‘Runners took numerous bad penalties on their own returns and surrendered 264 total return yards to the Bobcats. Punt return coverage in particular needs to be improved, as they allowed a backbreaking 91-yard punt return touchdown in the closing moments of regulation and allowed another long punt return touchdown that was called back, thanks to a questionable blind side block call.

The ‘Runners will kick off their home opener on Saturday at 2 p.m. CT in front of 11,000 fans, as the Alamodome will limit capacity to 17% this season. The game will be broadcasted on ESPN 3.