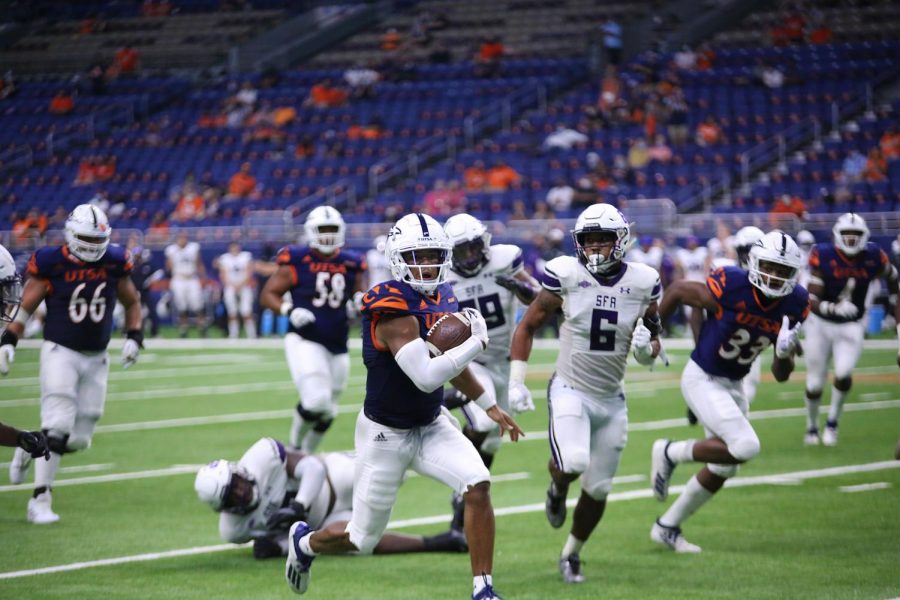 The Roadrunners followed up their opening week victory over Texas State with a gritty 24-10 win over the Stephen F. Austin Lumberjacks. The ‘Runners compiled 498 yards of total offense, but a lack of execution on a number of drives in the second half led to a close game. With the game standing at 17-10 in the fourth quarter, the ‘Runners’ offense was finally able to put together a complete drive. Running back Sincere McCormick broke a big run down the middle and Quarterback Frank Harris capped the drive off with a 23-yard scramble for a touchdown, handing the ‘Runners a two-score lead. Linebacker Clarence Hicks forced a fumble for the ‘Runners’ defense, effectively icing the game as the ‘Runners killed the last six minutes of game clock, giving Coach Jeff Traylor his first win at the Alamodome.
The ‘Runners were originally scheduled to take on the 17th ranked Memphis Tigers this week, but in an unfortunate sign of the times, the Tigers are in the midst of battling an outbreak of COVID-19 and are unable to play. Instead, the ‘Runners will be taking on the Blue Raiders of Middle Tennessee State University. This game is an impromptu Conference USA opener for the ‘Runners, coming a week earlier than their planned conference debut. The Blue Raiders have endured a difficult start to the season, entering the contest with a 0-2 record on the year. Coming off blowout losses to Army (2-0) and Troy (1-0) by a combined score of 89-14, the Blue Raiders are still trying to find their footing this season.
This will be the third all-time meeting between the Blue Raiders and the ‘Runners. In their prior meetings, each team took home a victory. The ‘Runners stand as the most recent winner in the series, beating the Blue Raiders on the road with a final score of 45-25 in 2016.
The ‘Runners’ offense has been able to pile up yardage in bunches this year, heading into week three of the college football season ranked 13th in the nation in total yards per game with 498.5. The ‘Runners hope to put up similar numbers against a Blue Raiders defense that has struggled in this regard, giving up 432 total yards per game, placing them at 16th worst in the country. A ‘Runners rushing attack that has seen Sincere McCormick and Frank Harris gash teams to the tune of 450 combined yards and six touchdowns has to be licking its chops; the Blue Raiders have surrendered 290 yards rushing a game, making them the second worst in the nation. While Harris is unlikely to throw the ball as much as he did last week due to this mismatch, it is likely that he will continue looking in the direction of Joshua Cephus in passing situations. Cephus has emerged as Harris’ favorite target and posted a strong nine-catch, 89-yard, one-touchdown performance last week.
The ‘Runners’ defense will also be looking to put in another strong performance following a solid “bend-but-don’t-break” approach last week. Despite giving up 344 yards of total offense to the Lumberjacks, the ‘Runners’ defense delivered timely stops to keep the Lumberjacks off the scoreboard. Against a Blue Raiders offense averaging only 212.5 yards per game (second worst in the FBS), the ‘Runners’ defense looks set for success against an opponent that’s struggling to get into an offensive rhythm. Look for Rashad Wisdom (tied for eighth in the nation in total tackles) and Jaylon Haynes (tied for fourth in sacks) to anchor another strong effort by the defense.
The ‘Runners will take on the Blue Raiders of Middle Tennessee State University on Friday at 7 p.m. in the Alamodome. Once again, attendance will be capped due to the pandemic. For those looking to catch the game on TV, it will be broadcasted on the CBS Sports Network.