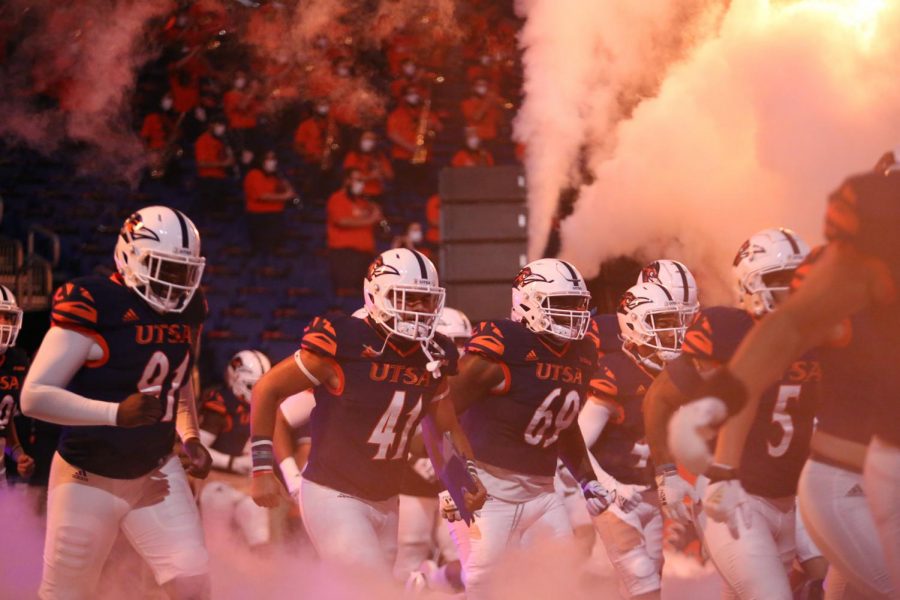 The 'Runners take the field before last week's game against the Stephen F. Austin Lumberjacks. UTSA won the game 24-10.

2020 has brought us many unique experiences, and you can add UTSA football receiving their first-ever votes in an Associated Press Top 25 poll to that list. On September 19th, the Roadrunners took to the Alamodome for their home opener against the Stephen F. Austin University Lumberjacks, hoping to spark up some momentum and start the year off with a 2-0 record.
A strong offensive performance from quarterback Frank Harris led the ‘Runners to their second win. Harris has started the season off by securing two consecutive Conference USA Player of the Week awards. The chemistry he has built with his receiving core over the offseason and in practice was evident in game two. He connected with them early and often, had a 63% completion percentage, and threw for a touchdown.
Harris had himself a day through the air, but he still found enough time throughout four quarters to rush for two scores himself, including a crafty 23-yard quarterback draw that ended with Harris propelling himself through the pylon. The reigning Player of the Week was responsible for 373 of the ‘Runners’ 498 yards on the offensive end — 104 from the ground and 269 through the air.
After such a long break from the Alamodome, the ‘Runners quickly became familiar again with their home field, especially the red zone. A three-yard rushing touchdown by Harris, combined with his connection to wide receiver Josh Cephus for a four-yard pass in the end zone early, gave the ‘Runners the edge, holding a 17-0 lead in the second quarter.
After halftime, the ‘Runners came out of the gate with a 17-3 lead following a late first-half field goal from the Lumberjacks. The Lumberjacks came out with some signs of life, fueled by quarterback Trae Self’s passing performance. Self set the Lumberjacks up well through the air with a 45-yard pass to wide receiver Xavier Gipson, followed by a 10-yard receiving touchdown by wide receiver Remi Simmons to put the Lumberjacks one score away with less than two quarters of play. Despite this, the ‘Runners managed to squeeze out a 24-10 win at home, giving Jeff Traylor his first win in the Alamodome as the ‘Runners’ head coach.
With week two of college football concluding, the 2-0 ‘Runners hope to continue the momentum into week three. They will face off against the Middle Tennessee Blue Raiders this Friday at the Alamodome.