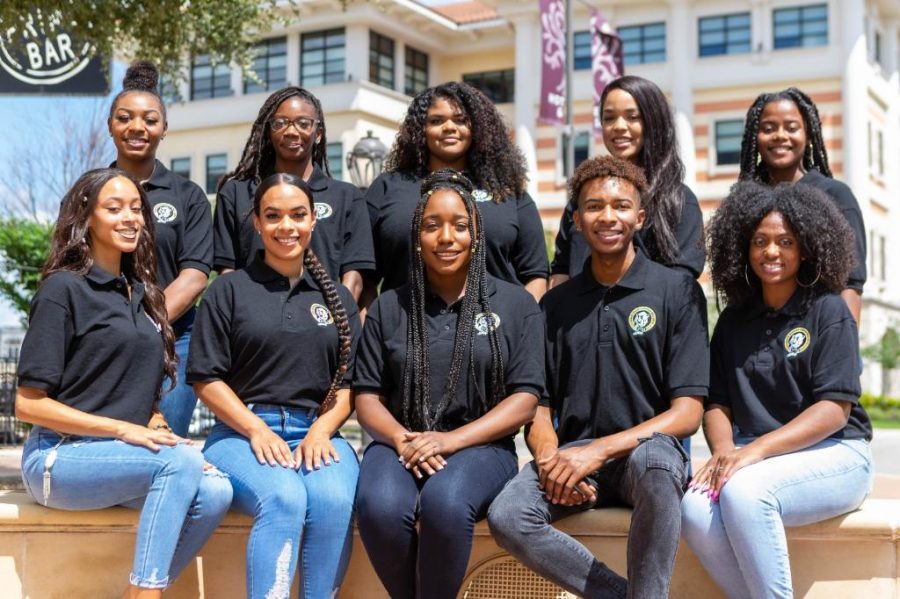 The executive board of the Black Student Union at the Eilan.

Members of the Black Student Union (BSU), a student organization whose mission is to build connections among students of the Black diaspora, were inundated with racial slurs and racist music during a general meeting for the organization on Sept. 22.

The BSU was holding its second general meeting of the semester when multiple unknown individuals entered the Zoom call, played loud racist music and repeatedly used the N-word with a “hard ‘R’” even after being removed multiple times, according to Priscilla Okolie, a junior public health major and president of the BSU. When the individuals came back, they often used different names.

Okolie said she filed an incident report with UTSAPD about the matter to try to hold these individuals accountable after the BSU advisor, UTSAPD Chief of Police Gerald Lewis, connected her with an officer. The university is also looking into the matter.

The BSU has received an outpouring of support from other UTSA student organizations, students, alumni, faculty and administrators.

“People have been so kind,” Okolie said. “We’ve had certain alumni even offer money, which was so kind of them.”

Okolie said that through the support the BSU has received from other Black-focused organizations, she learned the attack on the BSU was not the first of its kind.

“A few of these [Black-focused] organizations … expressed that this happened to them in one of their meetings, and it’s just really sad for me,” Okolie said.

Eric Brey, the chair of the Department of Biomedical Engineering, also signaled his support of the BSU on Twitter, calling the attack disgusting.

“It’s not a difficult thing to speak out against,” Brey said. “In this case, this is clearly awful, and it’s clearly something that the students need to know we’re here for them.”

“What happened here is despicable,” Eighmy said in a tweet. “Our students have every right to gather without being subjected to vile and hateful disruptions. We condemn racism and bigotry, and are aggressively working to identify and hold accountable those who have behaved in such an offensive manner.”

Eighmy responded to the second tweet the BSU put out on Sept. 25 that thanked the community for the support it had received.

“We are all so proud of @UTSA_BSU and look forward to meaningful dialogue in our shared commitment to fighting racial injustice,” Eighmy said in his tweet.

Eighmy also communicated over email with one of the members of the BSU’s executive board to discuss the incident.

Chief Communications Officer Joe Izbrand explained what Eighmy’s role has been since he learned what happened.

“President Eighmy learned of the incident very early Wednesday morning and personally engaged UTSA leadership at that point and throughout the day so that necessary support was provided to the BSU and other organizations that were impacted by this shameful event,” Izbrand said. “He wanted to ensure timely availability of support and resources, communication with all student organizations about best practices to prevent further incidents, and the identification of those responsible.”

Okolie said that if this incident had happened several years ago when she was a freshman, UTSA’s response would likely have been horrendous but that attitudes have changed with the addition of people such as Dean of Students LT Robinson and Director of the Multicultural Student Center for Equity and Justice Brandi Scott.

Despite acknowledging the university’s growth, Okolie expressed concern about how Black students are still treated on campus.

Okolie said the university is not doing enough to hire Black faculty and administrators, steps she says are key for Black students to feel welcome and represented.

“I’ve only ever had three Black teachers on this campus,” Okolie said. “I can’t tell you just how wonderful it is to have a professor who looks like you and understands what you’ve been through and encourages you in a way that other professors may not, simply because they don’t understand, through no fault of their own for the most part.”

In the Spring 2020 semester, 4% of faculty and 8% of students were Black, according to university demographics dashboards.

Okolie said the BSU would be making efforts to secure their meetings so something like this will not happen again.

Despite the racist attacks, Okolie said her organization will keep pushing on.