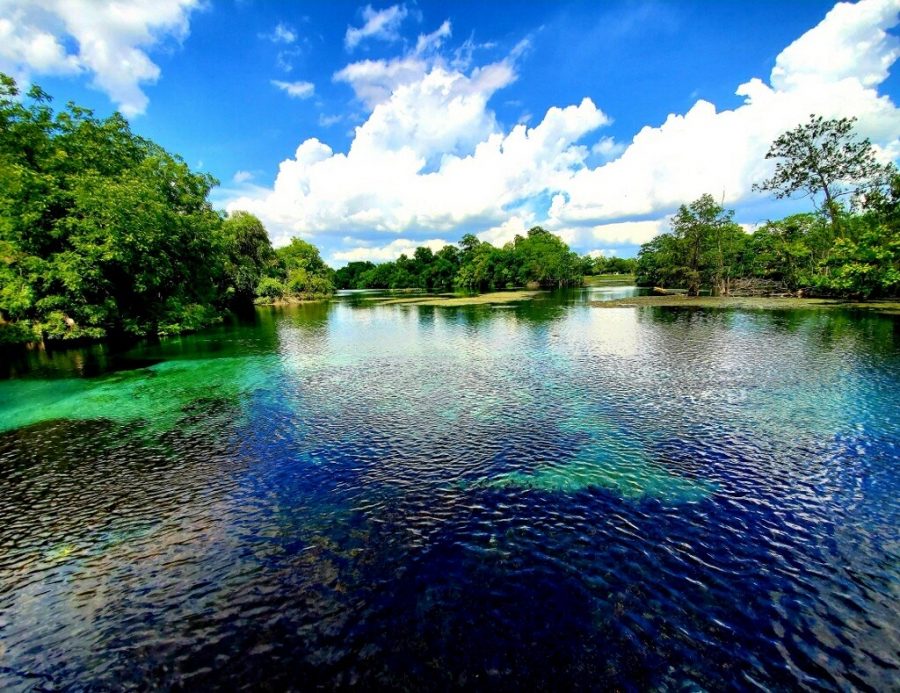 Heading north on I-35 can bring with it many sights and attractions that embody their own character and charms. One place that offers a retreat from the rush of the interstate is a small network of parks that call New Braunfels home. With a fall feeling in the air, the lure of the Comal River’s historic waters was calling, and a return trip to Landa Park was in order.

Exiting the interstate after a 40-minute drive from downtown San Antonio, I was greeted by the slowed pace of New Braunfels. On the right was a baseball diamond, complete with the distinct sound of an aluminum bat hitting a pitch. As I made my way farther into downtown, I was engulfed by antique storefronts, small businesses and intricate murals that told the rich history of the industrial town. The streets bore the names of trees: Mesquite, Hackberry, Walnut and Sycamore. Nature and industry had blended here over the years, and the result of their coexistence is a beautiful, artistic amalgam of the man-made and the wild.

Arriving at Landa Park ignites an orchestra of senses as the crystal-clear waters of the Comal reveal a patchwork of blues and teals across the bottom of the river. The wildlife seems completely oblivious to humans, perhaps having grown accustomed to their presence over the years. The sprawling expanse of the park offers opportunity in every direction.

Naturally, I gravitated to the waterfront along the paved trails. Being fed from natural springs that pump eight million gallons of water per hour into the shortest river in Texas, the Comal boasts a transparent surface that allowed me to see to the bottom with unbelievable clarity. The reverse was also true, however, as a bass eyeballed me suspiciously while I slowly approached my first few casts. I could almost hear a faint “not today” as it swam back to its home under the bridge.

The river’s water is truly miraculous, long reeds flowing in the direction of the current and rocks of all shapes and colors forming an abstract painting on the riverbed. Everything is alive here, vibrant with color and form, asking to be explored.

After making my way down the main banks of the river, I followed a creek up to the hiking trail that sits tucked away, divided from the park by a two-lane road. One way to access the trail is through a stone tunnel, likely having been there longer than anyone reading this has been alive, serving as a passageway into the quiet reserves of nature that sit beyond.

The trail is warm in color, holding a rusty hue from the iron deposits that have accumulated over the years. The soft dirt underfoot is laden with a tapestry of tree roots, requiring me to keep my eyes fixed to the forest floor. It was not long before the cedars and oaks gave way to another path, one cut out from rock collapses. The less traveled trail beckoned and I followed, facing steep cliffs overgrown with moss. Among the wreckage of the rockslides stand trees that have withstood the onslaught. They are battered and misshapen but have adapted to their surroundings.

As I walked the rocky path enamored by the natural beauty, I twisted my ankle, repeatedly. Hiking boots are recommended. The trail continues for just under a mile, revealing benches along the cliff faces, a blend of foliage on the forest floor and stone trailheads constructed in every direction.

Returning to the center of the park, I saw a natural spring set in the stone cliff face I had followed along the hike. The water flowed through rapid and clear, moving along bends that had been constructed so as not to impede its progress. Following the creek revealed the larger image of the park and town, as signs explained the importance of the river, the history of its use and the citizens’ reverence for the water that helped build their city.

Landa Park is a 51-acre park in the heart of New Braunfels, approximately 40 minutes from downtown San Antonio. The park includes miniature golf, an aquatic center, a miniature train, two playgrounds, a fishing pier, Panther Canyon Nature Trail and a wading pool. This park is open from 6 a.m. to 12 a.m. and is free to visit. Water access to the Comal can be found near the park or in neighboring Prince Solms Park, another waterfront attraction within city limits. New Braunfels is home to a folksy feel and proud German heritage, so don’t be surprised if you hear a “willkommen” or “howdy” when you walk past someone. If you’re looking for an intersection of art, nature and industry, Landa Park has the potential to exceed all your expectations.