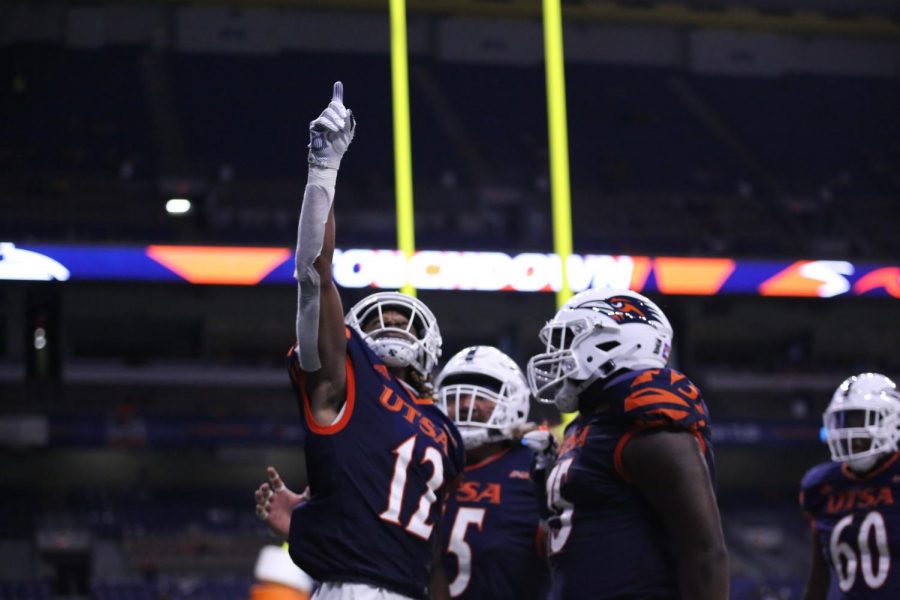 wide receiver joshua cephus points to the sky after scoring a touchdown. Cephus has been a key part of a substantially improved Roadrunner offense this season.

This weekend, the Roadrunners will travel to Birmingham to face the University of Alabama at Birmingham Blazers. The Blazers are by far the most formidable team the ‘Runners have faced so far. Both teams come into Saturday’s game with winning records. The Blazers stand at 2-1 with their one loss coming to the University of Miami. The ‘Runners have yet to lose a game on the season. The difference between the teams is that the ‘Runners could have quite easily been 1-2 if it had not been for some late game heroics. The Blazers’ only loss at Miami was expected. Miami is ranked eighth in the nation; they are by far the superior team, yet the Blazers were able to hang around. The other two games the Blazers played in have been relatively easy victories.

The two teams matched up last year on Oct. 12, and the game ended in a convincing 33-14 Blazer win. The ‘Runners have objectively improved since then, most notably at the coaching position. Jeff Traylor has managed to bring up the performance of the ‘Runners’ offense dramatically. In all but one game last year, the ‘Runners scored less than 35 points and averaged 20 points per game. After three games under Traylor, the ‘Runners’ offense is averaging 37 points per game. The ‘Runner defense is still prone to giving up a lot of yards despite some stellar play by various individuals such as Jamal Ligon, but they have also proved that they are capable of making key stops and forcing turnovers when needed.
Quarterback Frank Harris, who was out with an injury during last year’s matchup between the teams, is questionable for Saturday due to a knee sprain that he suffered against the Middle Tennessee Blue Raiders on Friday. Given the nature of the injury and the short turnaround before the next game, it would not be surprising to see Josh Adkins take the field for the ‘Runners in Birmingham. The transfer quarterback from New Mexico State University finished 16 of 28 passing with 233 yards and a touchdown after replacing Harris at halftime. Adkins is a very capable quarterback with a notable amount of experience; he seemed to unlock the ‘Runners’ air attack against the Blue Raiders. Receiver Zakhari Franklin made his season debut and looked great alongside Joshua Cephus and Brennon Dingle. The ‘Runners have a good amount of weapons on the offensive side of the ball, but they have not been tested like they will be by the Blazers.

The ‘Runners were supposed to win all the games they have played so far, and they have, albeit not in as convincing a fashion as some would have expected. The game against the Blazers is the first chance to see how much the team has changed since last year. The ‘Runners are 18-point underdogs, but many believe this line is not indicative of the talent they possess. The Blazers and ‘Runners will kick off their game at 11:30 a.m. this Saturday.