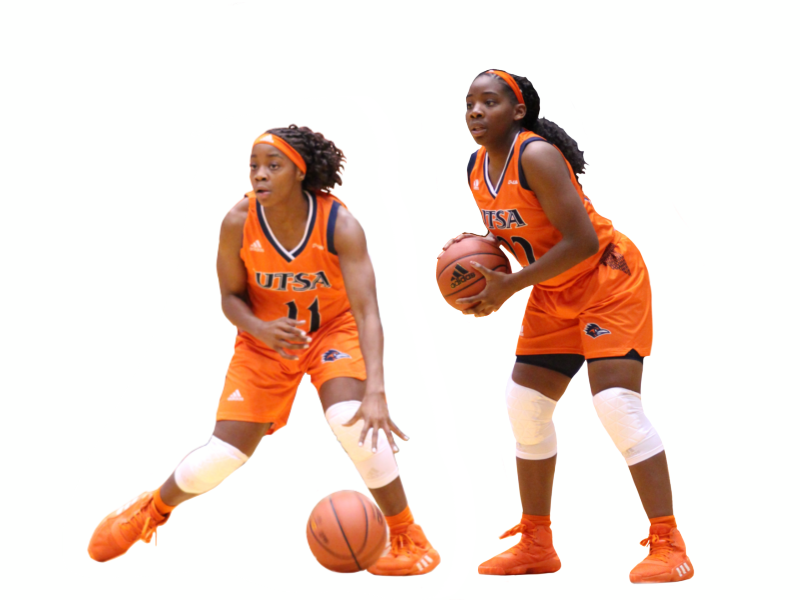 Playing a sport for a university is a dream come true for many young athletes around the country. Sisters Charlene and Ceyenne Mass have both accomplished this goal and now find themselves in the unique position of playing together on the UTSA women’s basketball team.
The Mass sisters started playing basketball early on in their childhood, and were always involved in athletics.
“When we were little, our parents had us actively involved in a lot of different sports,” Charlene said. “At that time we were heavily involved in track.”
Charlene added that, during their younger years, their dad gave them a basketball, offering the sisters a choice: play basketball in the air conditioning or keep running during hot summer days.
“I just remember hot, hot summers, so, without a question, we said, ‘Yeah, we’ll take it,’ and we grew to love the game as we got older,” Charlene said.
Ceyenne and Charlene grew up in the Converse area just outside of San Antonio and decided to come to UTSA because of their interests in cyber security, among other reasons. They wanted to prioritze being students, and were drawn to UTSA’s proficiency in that area.
“We really liked how we’re both majoring in cyber security, and UTSA is number one in the nation in cyber security,” Charlene said. “It was also close to home but far enough to get the college experience as well and, of course, the [women’s basketball] program. It was fairly new, and we thought we would be more able to make more of an impact on the team.”
Siblings playing together at the college level is not common, but Charlene and Ceyenne both agreed that, although it was not exactly planned, they loved the idea of playing together.
“Playing with my sister is the ultimate reward,” Charlene said. “This is my best friend, so playing with her was always ideal. However, we had the conversation in high school where I said, ‘Look, if there’s a school that I thought was a better fit for [Ceyenne’s] needs, I didn’t want her to hesitate. But a plus was if we could find a school that fit us both perfectly, which we found at UTSA.”
Ceyenne agreed, saying, “Being able to play with your best friend and major in the same thing — it was just a perfect situation.”
With a season of playing together now behind them, they have turned their attention to this year, taking advantage of the extra time to prepare that quarantine and the COVID-19 pandemic has given them. Charlene and Ceyenne spoke about how they each wanted to improve and what they are trying to work on during the upcoming season.
“Every year, it’s about efficiency,” Charlene said. “There’s obviously things that are my strengths; I like to get into the paint, and I’ve always been able to shoot from there. I want to be just as efficient in the paint as outside. Everything’s got to be on point. Free throws, threes and layups.”
“I wanna focus more on the three ball; I’m pretty good on the inside,” Ceyenne said. “I want to expand my game and to be more than a one-dimensional player and just make an impact in all the stat columns. That’s my goal.”
As they continue to try to meet their respective goals, the Mass sisters use the inspiration provided by various basketball players to motivate them. They notice how their favorite players play and are influenced by their greatness.
“I think two players for sure would be LeBron James — he’s the best; he’s just a great player — but also in the WNBA, Arike Ogunbowale. She’s a phenomenal player — shifty, great IQ, efficient all over the court,” Ceyenne said.
Her sister Charlene opted to go with another WNBA player, saying, “One of my favorite players right now — her name is Sue Bird — she plays for the Seattle Storm. Her IQ is absolutely amazing. You can tell she’s been at it for a really long time. If I want to model my game after anyone, it’s Sue Bird. She gets buckets, and that’s the name of the game, so her for sure.”
The two siblings look to play key roles in the development and progression of the women’s basketball team this year and eagerly await the beginning of the season on Nov. 25.