Athlete of the week: Hunter Duplessis 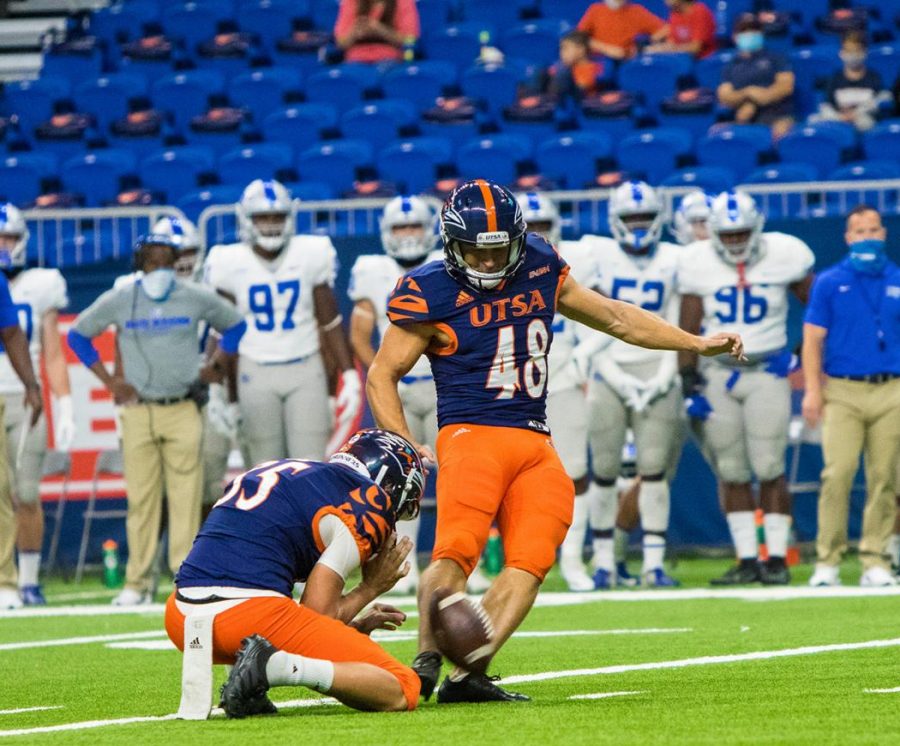 Hunter Duplessis kicks a field goal against the Middle Tennessee Blue Raiders. Duplessis has yet to miss a field goal or extra point this season. He is an elite talent at the college level.

With the season-opening game against Texas State tied at 48-48 in double overtime, UTSA faced a crucial situation, a 29-yard field goal for the win. In a game that had only reached that point due to troubles in the kicking department for Texas State, there was no such anxiety on the UTSA sideline as place kicker Hunter Duplessis strode onto the field. The redshirt senior from San Antonio calmly set up and, despite being iced once by Texas State, hit the game-winning field goal right down the middle to send the ‘Runners home with a 1-0 record. Such drama had become the norm, as he has been called on to make numerous big kicks down the stretch, most recently against Middle Tennessee State, where he hit a 35-yard field goal in the fourth quarter that would serve as the difference maker in a 37-35 victory.
Duplessis has shown an ability to perform in these clutch situations, never letting the pressure affect his ability to make crucial kicks. His philosophy is that “You don’t really handle it in the moment, it’s more handled in the preparation over time and then when you take the field, that’s the shining moment that you get to allow people to see a culmination of practice after practice and rep after rep.”
Aside from his clutch factor, Duplessis has shown a level of consistency in the kicking game that not many college teams get to enjoy. He has converted all twenty of his kicks so far this year, with seven made field goals and thirteen successful extra points. In fact, Duplessis has not missed a kick in over a year. His last miss of any kind occurred back on September 21st, 2019, against North Texas. Since that miss he has converted his last 16 field goals in a row. He attributes this to always being in a state of self-evaluation and improvement.

“Just trying to keep to the technique I have and figure out my swing more and more every day, and how I strike the ball I think is really important for me. Understanding that just because the ball goes through the uprights doesn’t necessarily mean it was a good kick, it doesn’t necessarily mean it was my kick and working out the kinks in that regard.” Duplessis ascribes this to being “somewhat of a perfectionist and is something every good kicker needs to hold close to them.”
Despite all of this success, however, Duplessis hasn’t really thought about pursuing a professional career. “Right now, kicking is such a mental warfare type skill, so professionally I haven’t thought about it, I hardly talk to people about making 16 field goals…looking forward I’m not even trying to go there and in my mind right now if it’s meant to happen people will reach out to me…but until that time there’s a time and place for that and I think my time and place is just the next kick.” If he chooses not to pursue a professional career, Duplessis appears to have a number of options on the table once he graduates, including applying for officer candidate school in the United States Air Force.
Duplessis got into football after spending much of his life playing soccer. After acquiring an interest in football, he became a kicker as a high school senior. One of the few schools that expressed interest in him was UTSA. “They were one of the only ones who responded to my emails and my film cut-ups, they brought me on for a walk-on tryout and I think they were more interested in my kick-offs. They told me I needed to become way more consistent in my field goals in order to really do anything in that area of the game, but they were interested in the power of my leg” said Duplessis.

In addition to his contributions and consistency on the football field, Duplessis is just as consistent in the classroom. An information systems and cyber security double major, he has been named to the Conference USA Honor Roll List every year since enrolling at UTSA, and has been chosen as a semi-finalist for the 2020 William V. Campbell Trophy, which is described by the National College Football Awards Association as being “presented to the nation’s premier football scholar-athlete.” The award has acquired the nickname of the “Academic Heisman” over the years. This recognition is no accident as Duplessis says, “Academics mean the world to me, they still do, and a pursuit of higher education is a big deal for me, probably in the near future talking in regards to a master’s degree, later on a doctorate. Because I enjoy it, I definitely enjoy school and I enjoy my professors a lot.”
When Duplessis isn’t splitting the uprights or excelling in the classroom, he can be found partaking in some of his hobbies. “Photography is a passion of mine, although I don’t get a lot of time to schedule shoots with people or go out on my own especially with COVID.” He also enjoys weightlifting outside of football, “even over the weekends in season, I’ll lift two to three times on my own, actually now with our punter Lucas Dean.” Duplessis is also interested in art, but above all he enjoys hanging out with his wife: “For the most part I enjoy going out and hanging out with my wife and doing different things like going around town and experiencing new things.”
Being a kicker can sometimes feel like an isolating position, but Duplessis approaches it as a much more team-oriented role. “I think it’s really important as a kicker to realize that it’s more than just yourself out on the field, because if you go out with that mentality, it seems like your team is not with you when you take the field, and that’s how kickers have been looked at in the past… but my guys really embrace me and I embrace them as well…so I think understanding that you’re a part of the team and taking the field with them as an entire unit is an essential part of that mindset… going into the season I think that’s my mindset more is to do what’s best for the team.”
Duplessis doesn’t like to set any personal kicking goals or expectations and prefers to keep his focus entirely on the team. “I think sometimes goals with kicking turn into stat-oriented kicking and that doesn’t pan out very well and puts a lot of pressure on kickers that’s unnecessary. So, whatever’s best for the team moving forward, that’s my motto.”
Duplessis and the ‘Runners will look to add another win to their 3-0 record this Saturday against the University of Alabama at Birmingham Blazers.