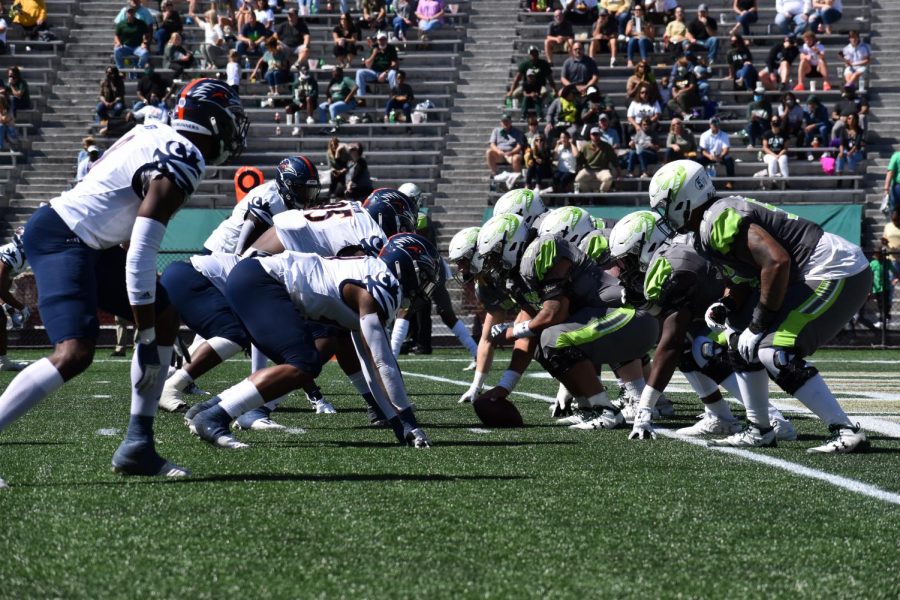 The 'Runner defense prepares to rush quarterback Bryson Lucero as he takes the snap from his own end zone. Punter Lucas Dean did an excellent job of pinning the UAB offense down deep in their own territory on multiple occasions.

The UTSA Roadrunners’ showdown with the University of Alabama at Birmingham Blazers didn’t go as many expected. The final score was a far cry from what many people thought it would be with the Blazers slowly pulling away and reaching a 21-13 victory. How the game eventually got to its final result was also unexpected.

The ‘Runners’ defense was outstanding in the first half. Their knack for situational playmaking was on full display. The ‘Runners forced two interceptions and a fumble against a team that has been repeatedly praised for having a strong offensive unit. Blazers quarterback Bryson Lucero was intercepted by safety Rashad Wisdom on their first offensive drive, giving the ball to the ‘Runners near the UTSA 40-yard line. The ‘Runners’ offense was not able to capitalize on the interception, however, and had to punt the ball away.

The offense not being able to capitalize on the defensive performance given by their teammates was the overall theme of Saturday’s game. The ‘Runners suffered a massive setback very early on; Josh Adkins, the ‘Runners’ second-string quarterback who was starting his first full game in place of Frank Harris, suffered a shoulder injury on the first play of the first offensive drive. It is unclear when he will return, but it forced third-string sophomore Jordan Weeks into the starting lineup. Weeks struggled immensely in the first half. The offense was unable to get any traction outside of bursts of yardage from running back Sincere McCormick, who amassed over 100 yards in the first half.

Despite getting a number of great opportunities from the defense, such as ideal field positioning, a fumble deep into Blazers territory and yet another interception, the ‘Runners’ offense put up only six points in the first half. Most offensive drives failed to take off and were either fueled by Blazer penalties or the aforementioned burst plays by McCormick. The defining moment of the first half came at the five-minute mark of the second quarter. The ‘Runners had a first down and goal at the Blazer three yard line but were stopped and turned the ball over on downs after head coach Jeff Traylor decided to pass on a field goal attempt. It was an understandable decision, but quarterback Lowell Narcisse (who specializes as a runner) was stopped twice on the goal line. The Blazers went into halftime with a 14-6 lead.

The second half started with a long Blazer drive that slowly marched its way into ‘Runner territory. The UTSA defense came out with ferocious determination. Several Blazer plays were completely blown up and lost significant yardage. In another unfortunate setback for the ‘Runners, however, safety Rashad Wisdom was penalized for “targeting” a Blazers receiver, a penalty that carries an automatic ejection. The ‘Runners were able to overcome the loss of their starting safety, however, and forced the Blazers to turn the ball over on downs shortly afterward.

When they took the field in the second half, the ‘Runners’ offense was zero for eight on third down, and Weeks had completed only six of 16 passes with an interception. Their first drive of the second half started the same way, and UTSA was forced to punt without picking up a first down. The Blazers took advantage of a fatigued ‘Runner defense and proceeded to score another touchdown, making the score 21-6.

Late in the third quarter, Weeks was pulled for Lowell Narcisse. Narcisse has more experience than Weeks and was the starter for some time last season. He immediately added an extra element to the offense. He scrambled and threw the ‘Runners back into the game, leading a drive that ended in a McCormick touchdown early in the fourth quarter. The Blazers and their fans in Birmingham faced the very real possibility of a ‘Runner comeback and a loss midway through the fourth quarter, which would have broken their impressive 19-game win streak at home.

With the Blazers up 21-13 and 2:18 left to play in the final quarter, the ‘Runners committed a crucial error. On a fourth down, a Blazer punt attempt that would’ve given the ball back to Narcisse and the offense with a chance to win the game didn’t pan out due to defensive edge rusher Solomon Wise being called for roughing the kicker, which gave the Blazers the first down they needed to run out the clock.

Despite the tough loss, the ‘Runners shouldn’t lose confidence in their team. The defense looked stout, and the offense has a good chance to get Frank Harris back from a knee sprain soon, which should help fix the passing inconsistencies that were on display in this game. The two upcoming games against the Brigham Young University Cougars and the Army Black Knights will be challenging, but this team has proven that it is capable of much more than the teams of ‘Runners’ past.