Cornyn vs. Hegar: the Senate race that could evolve (or devolve) Texas 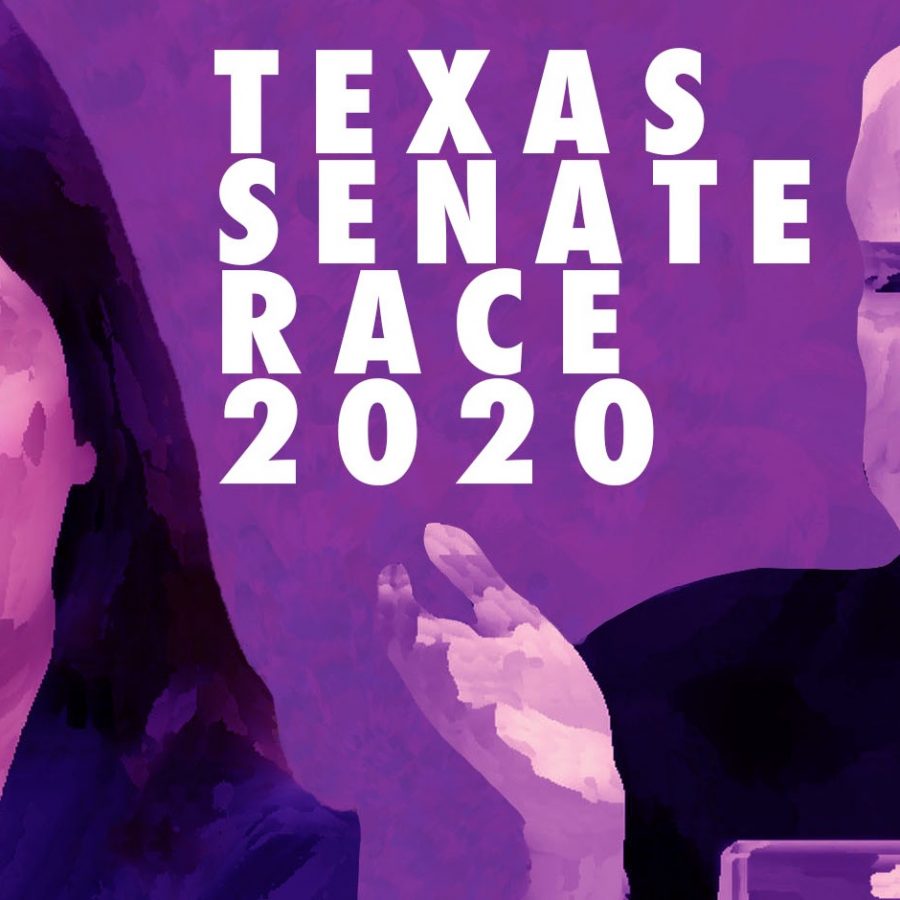 Amidst the tidal wave of attention devoted to the presidential election that comes around every four years, it’s easy for down-ballot elections to go relatively ignored by many voters. But these races are just as — and in some cases, more — important than the main event.

One big election that Texans have an opportunity to vote in this fall is the U.S Senate election between Republican incumbent Sen. John Cornyn and Democratic challenger MJ Hegar. Cornyn is a longtime member of the Senate who was first elected in 2002, while Hegar is an Air Force veteran who almost unseated a different Republican incumbent in 2018’s House of Representatives election for Texas’s 31st congressional district.

Hegar is now aiming to win election to one of the most powerful and important elected offices in not only Texas but the United States as well. The Senate, often referred to as “the upper chamber,” is the more powerful body in Congress, granted Constitutional duties such as the confirmation of federal judges, Supreme Court Justices and presidential Cabinet members, the operation of impeachment trials, and the approval of international treaties.

Additionally, because each state, no matter its population size, is granted two senators, rural areas with relatively few constituents are overrepresented in the Senate. This allows the Republican Party to overperform their actual share of voter support nationwide; in the 2018 midterm election, even though the Democrats received over eight million more votes than their rivals, the Republicans managed to hold onto their slim majority in the Senate (currently 53-47), allowing them to control the passing of legislation even with a minority mandate.

If Hegar and the Democrats want to turn a potential Biden victory into substantial legislative change, they’re going to need to flip as many Senate seats as they can. Coming off Beto O’Rourke’s narrow loss to Ted Cruz in the 2018 U.S Senate election, the eyes of Texas, and the nation, are upon the Cornyn-Hegar contest, which might be the first statewide election won by a Democrat since 1994.

With all this in mind, I tuned into the first debate between the two candidates last Friday night, excited to see how Hegar and Cornyn would handle each other’s claims and critiques.

The debate was held in the state’s capital and hosted by local Austin station KXAN. In a sign of the times, temperature checks were mandatory for the few attendees physically present, the audience was attending virtually via Zoom, and the candidates were tested for COVID (both negative). A KXAN reporter predicted that the back-and-forth of the night’s debate might test positive for negativity as well (if not to Biden-Trump levels).

Candidates had sixty seconds for opening statements and answers and thirty seconds closing statements for rebuttals. Hegar went first, asking the audience to remember Cornyn’s promises to solve Texas’ myriad problems and ponder why he hadn’t gotten them solved in his lengthy Senate career. Cornyn responded by saying he didn’t want the state he served and loved to be turned into “Chuck Schumer’s New York” and “Nancy Pelosi’s California.” The tone was set.

The first topic was the economic devastation in COVID’s wake. Hegar noted that the public health crisis needed to be stopped first before it could be addressed and declared she would vote for a bill to send stimulus checks to the American public. Cornyn boasted that he had actually been part of the bipartisan support for the one stimulus bill so far, name-dropping Chuck Schumer for the second time in five minutes as he did (which Hagar called him out for).

The tone was indeed snippy; Cornyn continued to make bombastic accusations implying, essentially, that Hegar’s campaign was supported and bankrolled by out-of-state carpetbaggers, which understandably irritated Hegar. But Hegar, who said during the debate that she had been professionally trained in crisis management, wasn’t flustered; she didn’t refrain from cutting Cornyn down for “caving under pressure” during critical moments in Congress.

Next came COVID questions. Hegar was asked if she would support making a hypothetical COVID-19 vaccine mandatory for schoolchildren and eventually answered in the affirmative. Cornyn dithered as well but eventually said that “people over 80” needed to receive vaccines first and stated kids were relatively unaffected, which Hegar called “misinformation.” The candidates then both raised their hands when asked if they would take the COVID-19 vaccine, although Cornyn qualified his statement by saying he wouldn’t be “first in line” and yet again called out Chuck Schumer and those “bankrolling” Hegar’s campaign.

Cornyn was then asked about his “flip-flop” in not supporting Merrick Garland’s 2016 Supreme Court nomination because it was in the last year of former President Obama’s term, then supporting Amy Coney Barrett’s nomination right before this fall’s election. He maintained it wasn’t hypocritical. Hegar was asked the same question in reverse (was Merrick Garland’s election year nomination wrong?), and she said the difference came down to timing.

Hegar was then asked whether or not she would vote to pack the Supreme Court with new judges; she said she would support term limits. She was also asked if she had reached out to state senator Royce West, a Black man with sizable minority support who she defeated in this spring primary election. Hegar responded that personal endorsements came with “quid pro quos” and that she would earn the support of “Black and brown communities” with “policy-driven solutions to problems” plaguing those communities.

Cornyn was asked why 25% of Texans didn’t know who he was; he said he was less concerned with popularity and more with affecting change, like making Juneteenth a national holiday. He also said Hegar had intimated that West only gained his political success because he was “corrupt.” Hegar, laughing, said she “didn’t even know what to say” to such a bold swipe at her.

The next subject was Black Lives Matter. Cornyn said he supported penalizing acts like George Floyd’s “murder” but didn’t think abolishing police and legalizing prostitution, which he intimated Hegar and her voters supported, were “Texas values.” Hegar said she was insulted by the idea she didn’t support law enforcement and said Cornyn was misattributing such beliefs to her.

Both were asked if they had met with “Black Lives Matters” leaders; Cornyn said he had met with “Black leaders” and said Hegar compared the actions of border enforcement officials to the oppression of Uighur minorities in “Communist China.” Hegar responded by saying that the “spreading of misinformation is why this country is so divided.”

Indeed, this was the theme of the night. Cornyn continued to make risible accusations that Hegar’s campaign was based on radical and non-Texan ideas, which Hegar was continually forced to rebut. But she wasn’t on the defensive— on issues like systemic racism, vote-by-mail restrictions, and sexual violence in the military, she went right at Cornyn for his misunderstandings and inaction.

Cornyn gave as good as he got, though; he asked why Hegar talked big about voter suppression but had sued to have the Green Party removed from the ballot. Hegar responded by saying that she believed in playing by the rules, unlike Cornyn. It was getting so hot, I was sad it wasn’t going to last longer.

But there was more swiping yet: where asked about the “remain in Mexico” policy for asylum seekers, Cornyn again claimed Hegar compared border enforcement officials to Chinese “human rights offenders”; Hegar responded that it was racist for Cornyn to keep bringing up the Chinese and “stoking anti-Chinese sentiment.”

Climate, always shafted, came up right against the end, with the candidates sticking to their party’s line on anthropogenic climate change and banning fracking. Cornyn declared that “everyone” supporting Hegar was for a ban. He then said he wouldn’t decriminalize marijuana; Hegar said she would, citing its medicinal potential, added tax revenue and the disparate racial effect of criminalization.

Finally came the 30-second closing statements, where Hegar said she would show “soft politicians” (pointing to Cornyn) how to do things in Washington— and it was over.

The predicted negativity had been delivered in spades. While debates are supposed to be confrontational, the candidates genuinely seemed to hold the other in a level of contempt. In such a divided age, is it possible for true believers of the Democratic or Republican narratives to not have at least a little contempt for the befuddled fools on the other side? I’d like to think so — but the entire affair confirmed for me that the fabled “two Americas” of liberal and conservative partisans was very real indeed. A Democrat would have thought Hegar held Cornyn’s feet to the fire; a Republican would have felt Cornyn had exposed Hegar. Can these dual realities be reconciled? If they can, election season is not the time to try…