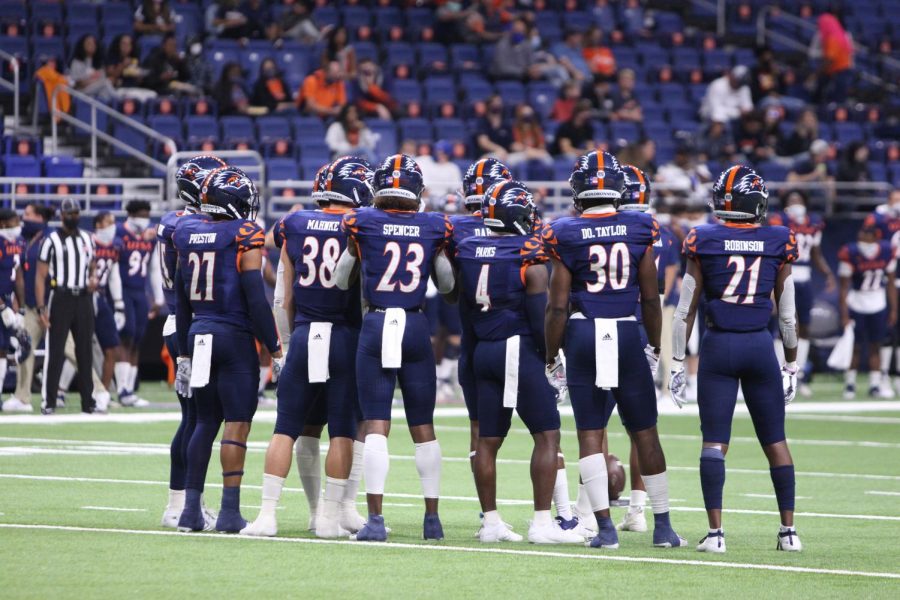 The Roadrunner defense huddles up and waits on the Army Black Knights to set up on the line of scrimmage. UTSA fell to Army 28-16.

The UTSA Roadrunners (3-3) took on the Army West Point Black Knights (5-1) at the Alamodome on October 17th. The ‘Runners lost the game 28-16, making this the third game the ‘Runners have lost in a row.
To start the game off, Army’s running back Anthony Adkins broke through the UTSA defense and escaped for a 66 yard touchdown. Heading into the second quarter, UTSA’s kicker Hunter Duplessis put the first points on the board for the ‘Runners by making a 50.5 yard field goal. Army answered soon after with a 5 yd rush from Jakobi Buchanan scoring their second touchdown of the game. With the score being 14-3 and 5 minutes until halftime, UTSA led by Quarterback Lowell Narcisse marched down the field and scored their first touchdown. After a display of some phenomenal footwork by Narcisse to get a first down, Narcisse threw a dime to wide receiver Zakhari Franklin making the score 14-10 going into halftime. To start the second half off UTSA’s defense was on fire getting two back to back sacks, first from Christian Clayton then from Corey Mayfield. Even with UTSA’s smothering defense Army was able to score a touch with a 37 yard rush from quarterback Tyler Tyhier. Going into the fourth quarter Narcisse was carted off the field after a 20 yard rush down the middle where he made contact with an Army player. With UTSA on Army’s 11th, quarterback Frank Harris took the field and on his first play he found Franklin in the corner for a touchdown, unfortunately, Duplessis’ kick was blocked. With the ‘Runners down 21-16 stopping the drive was a must, however, the ‘Runners were unable. Army’s quarterback Cade Ballard threw a 53 yard pass to wide receiver Camden Harrison which set up Ballard to make a 5 yard rush into the endzone. The ‘Runners had a chance to make a comeback after recovering a fumble, however, they were unable to complete any of their passes. The final score ended 28-16 with Army leaving with a win.
Even though the ‘Runners lost, there were some notable performances coming from both the offense and defense. Franklin set a program record for receptions in a game with 12 and Running Back Sincere McCormick had his third time rushing for over 100 yards this season. On the defensive side of the ball Kelechi Nwachkuk registered for 16 tackles, 9 of which were solo stops.
Next week UTSA will be taking on the Louisiana Tech Bulldogs on October 24th at the Alamodome. The game will start at 7 P.M. where the ‘Runners will look to break a three game loss streak. Make sure to tune on ESPNU.