This Halloween, don’t let politicians have all the fun playing pretend 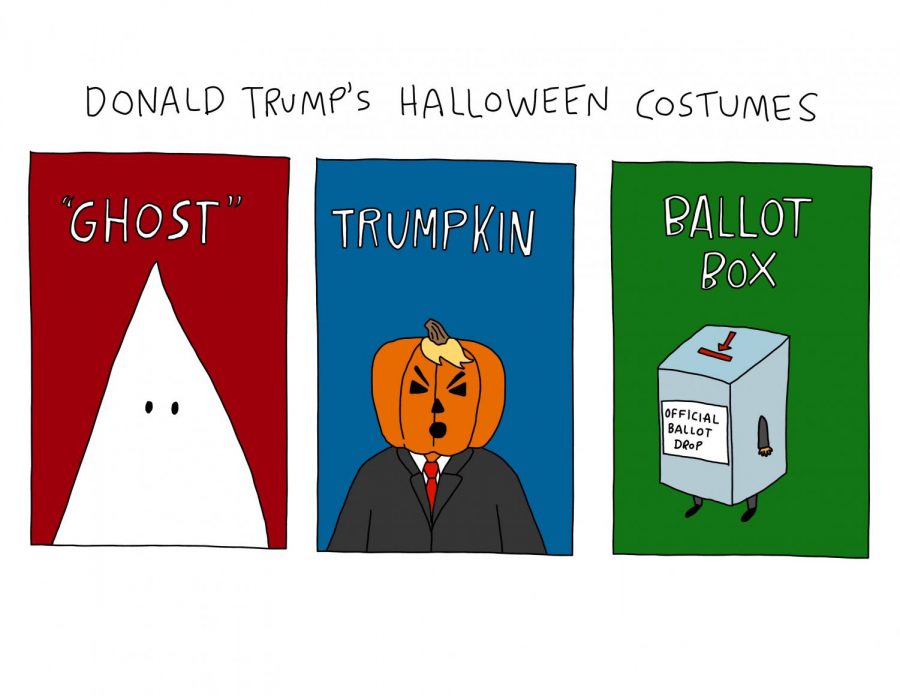 Halloween is an exciting time for college-aged youth. The traditional costumery that accompanies the holiday presents an opportunity for people to refashion themselves as someone or something funnier, scarier, hotter, different. The costume-wearer transcends themselves and, in doing so, reifies their belief that they, the hidden-but-ever-present human creator of the costumed self, deserve the attention of those who see them wearing it. A stronger reinforcement of self-esteem can scarcely be imagined.

During a presidential election year, the hype is turned up to eleven: as Election Day is always the first Tuesday after November 1st, the frissons of energy that accompany both it and Halloween combine to create an occasion for social signaling that is frankly unmatched in the college social sphere. One can show off their wit, body and politics in one fell swoop.

Of course, during the plague year of 2020, Halloween will be sadly circumscribed. Some parties will certainly still happen, semi-hidden from the prowling eyes of social distance warriors, but this writer cannot in good conscience promote such antisocial behavior. Nevertheless, those wishing to accumulate the clout from a clever costume can still show off their duds on Instagram, Zoom or one of the other digital simulacra that have come to dominate our experience of life. This writer is committed to helping readers do so by sharing ideas for hilarious Election 2020-themed costumes.

First off, of course, one can spoof one of the presidential candidates themselves. While some may consider an orange-spray-tanned Donald Trump or an aviator-sporting Joe Biden relatively low-hanging fruit, a particularly well-crafted take on either of the septuagenarians vying for the big prize in Election 2020 can still bring in the plaudits from fellow youth.

Delving deeper, we might consider the family members of Trump and Biden. There certainly is a lot of material here: in la familia Trump, we have Melania Trump, who can be spoofed simply with a pair of shades and the $39 Zara jacket (or a substitute) with the words “I really don’t care, do u?” that she infamously wore while visiting migrant children held in detention at the Texas-Mexico border. If you don’t feel like cosplaying Melania in such a tone-deaf moment, there’s also the young Barron Trump, who, at fourteen years old, already towers over his 5’11 mom and 6’3 dad. To my mind, a pair of stilts or even ostentatious platform shoes should capture the essence of his lofty stature well.

On the other side, there’s Hunter Biden, the lovable ragamuffin of the Biden clan. Recent pictures showing America’s favorite prodigal son flexing a denim jacket shirtless indoors and smoking a cigarette in the bathtub are perfect grist for a funny and sexy costume for the fellas. Sunglasses, a denim jacket and an (unlit, preferably) cigarette will allow you to steal his look.

I would be remiss to not mention the vice presidential candidates, Kamala Harris and Mike Pence. Harris can be best mirrored with a pair of Timbs and a blazer, in reference to her much-lauded campaign-trail fashion choices. Funnier is a take on Pence, who can be mimicked effectively with a fake fly on one’s hair (and maybe a white wig for extra verisimilitude), a simple but effective reference to a debate moment that had the audience in stitches.

Past the particulars them Dems, there are plenty of other election-related costumes to be had. For those aiming for a sultry look, dressing up as a sexy “naked ballot” — a mail-in ballot which has not been properly placed in a security envelope to prevent tampering — is a perfect choice. This costume does not entail one posting themselves in nothing but their birthday suit on the ‘gram; rather, it demands a high level of artistic effort from the wearer, who must find a way to create a wearable ballot-sans-security envelope. If the crafty and cute amongst us were successful at it, though, I am squarely convinced it would blow away all other costumes.

For a less high-effort voting-themed group costume, one can always collect several other friends and call themselves a long line of voters waiting patiently to do their civic duty. All it demands of its participants is normal dress, but the knowing cynicism of it all will surely leave an impression on those who witness it.

These are just a few ideas for Election 2020 costumes — there are scores more out there just waiting to be conceived — and I am confident that despite COVID-19, the wit and wisdom of our young adults will be on display during this extra-special pre-election Halloween season.