Despite COVID complications, UTSA hopes to play UTEP on Saturday 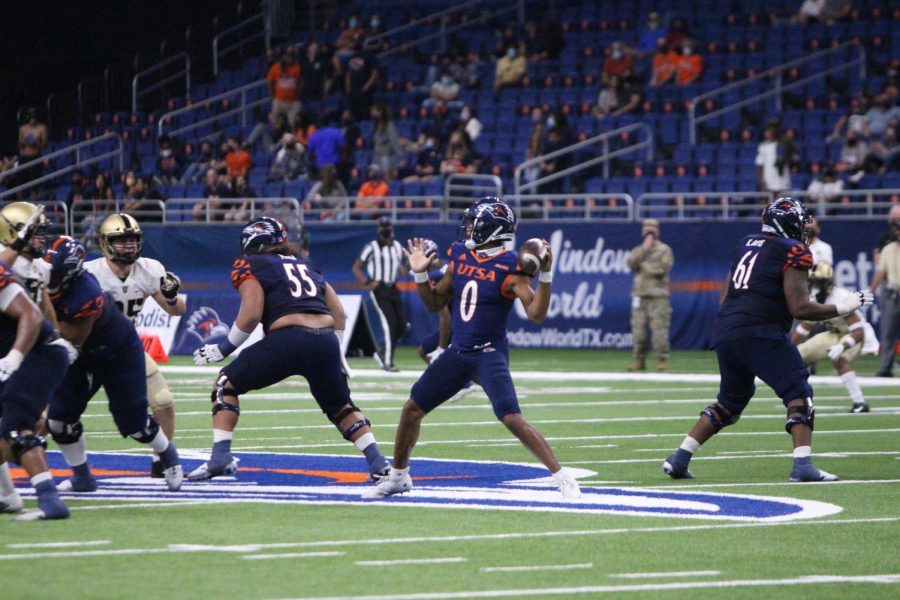 Frank Harris looks to pass against Army earlier this season. Harris, who has dealt with a knee injury for more then a month, and his backup Jordan Weeks, are a big part of UTSA's dwindling QB depth chart.

This week, as they come off of their first bye week in eight weeks, albeit one that was not planned, UTSA football is tentatively scheduled to take on UTEP in a homecoming matchup at the Alamodome.

UTEP enters the game even more rested than UTSA, last playing on Oct. 24 before games against North Texas and Florida International were canceled due to COVID-19. UTEP boasts a 3-3 record on the year. On paper, this would indicate they are a much improved team compared to last year’s squad which went 1-11, but there are signs this may be a mirage.

UTEP boasts wins over Stephen F. Austin, Abilene Christian and Louisiana-Monroe (0-8). Those wins are made up of two NCAA Division I Football Championship Subdivision teams and one of only three winless teams in the entirety of college football. To their credit, however, UTEP has looked very competitive in two of their three losses. Despite a 59-3 demolition at the hands of the University of Texas (5-2) during the second week of the season, UTEP has been competitive in its other two losses, falling to Louisiana Tech (4-3) 17-21 and the University of North Carolina at Charlotte (2-3) by a score of 28-38. UTEP is undefeated at home this season at 2-0 but are headed to San Antonio sporting a 1-3 record on the road. This is the eighth all-time meeting between UTSA and UTEP, and the series favors UTSA historically. UTSA leads the all-time series 5-2 and has won three straight, all by double digits.

UTEP’s offense is only averaging 218.2 passing yards per game, and sophomore quarterback Gavin Hardison is completing just 52.8% of his passes with four touchdowns and five interceptions. UTSA’s defensive focus will not be focused on UTEP’s passing game.

The real test for the defense will instead come on the ground against freshman running back Deion Hankins. Hankins has appeared in five games for UTEP this season, putting up 419 yards rushing on the season and averaging 5 yards a carry. The key for UTSA will be to limit Hankins’ ability to generate the big play. In five games played, Hankins has eclipsed 100 yards rushing with at least one rush of over 30 yards in three of those games. UTEP is 2-1 in those games while in the two other games he has played in, both UTEP losses, Hankins has rushed for only 34 and 35 yards. If UTSA is going to win this football game, limiting Hankins to under 100 yards on the ground will be key, which may be a legitimate challenge, as UTSA has allowed a 100-yard rusher on the opposing side in four of their eight games played this season.

The main issue UTSA will have to overcome is a stifling UTEP defense. Following a performance against Florida Atlantic  in which they appeared completely out of sync on offense, the UTEP defense will present itself as a tough riddle to solve. Currently ranked 16th in rushing yards allowed per game when excluding teams that have only played one game, UTEP is positioned to neutralize what UTSA do best: running the football.

Surrendering only 107.7 yards on the ground per game, the UTEP defense will look to make life very hard on Sincere McCormick, who, for the first time in a long time, does not lead the nation in rushing; he has slipped to second behind Iowa State’s Breece Hall.

UTEP’s stifling run defense would suggest that UTSA’s best chance would come through the air, but this also presents a challenge, as UTEP is only giving up 218.8 passing yards per game, 34th when adjusted for teams that have only played one game. When put together, this contributes to a defensive unit that is only allowing 326.5 yards of total offense per game, 17th in the country when excluding teams that have played one game. This is only one spot below Florida Atlantic and one spot higher than UAB, two programs that the UTSA offense struggled against this season.

If Saturday’s game goes on as scheduled, there are still questions that need answering. The size and scope of the UTSA program’s COVID-19 outbreak remains unclear. It remains a question which players, if any, may be forced to miss this week’s clash. Most signs are pointing for the game to go on as scheduled, but in the era of coronavirus, nothing is ever a guarantee. With time running out before the end of the season, this game is a must win for UTSA’s bowl game prospects. UTSA is scheduled to take on UTEP Saturday at 2 p.m. in the Alamodome. The game will be available to watch on ESPN+.