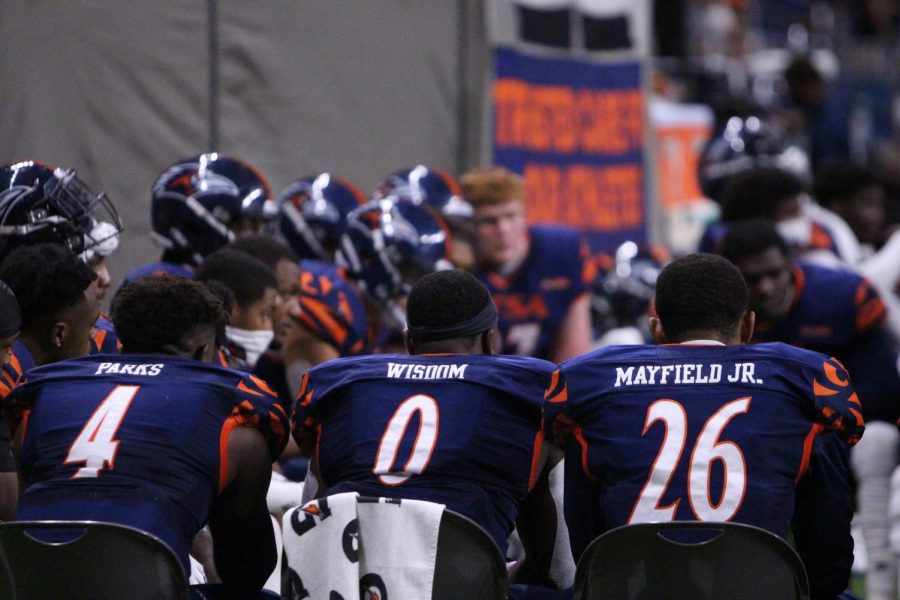 UTSA's defense huddles up on the sideline during a game against Army in October. The team hopes to return to play on Saturday against UTEP.

UTSA football’s routine COVID-19 testing returned positive tests as announced by the athletic department on Friday. This forced UTSA to postpone the game against Rice scheduled for this past Saturday. UTSA had avoided having to cancel or postpone any games until then and played for eight weeks in a row.

The positive tests reported were described by the UTSA Department of Intercollegiate Athletics as “coronavirus-related issues within the program.” On Monday, head football coach Jeff Traylor spoke to the media about the situation, providing more information regarding the decision to postpone the game.

“[We were] in a position, due to injury, positive testing and contact tracing, we would not have been able to play the game,” Traylor said.

Traylor and his staff spent a considerable amount of time on Thursday night tracing possible cases in an effort to minimize the spread and ultimately made the situation public the next morning. The contact tracing and testing has yet to meet its conclusion, but the number of players that returned positive tests sat at two, according to Traylor.

The situation is still evolving, and there are many hurdles that need to be cleared in order for UTSA to get back to action. Contact tracing tests need to come back negative, and the team must be monitored in order to detect any further outbreaks. The game against the UTEP is still on schedule, and Traylor seems cautiously hopeful about UTSA’s chances of playing on Saturday despite alluding to the uncertainty of the situation. He also made it a point to stand up for his players and the team, as he expressed how he felt about those who did test positive.

“We were tested again [Monday], and we’ll be tested again Friday,” Traylor said. “We are still waiting for results. There’s so many things that are uncontrollable. I think we just have to be very careful that we don’t make [the players that tested positive] feel bad because we have a 0.38 positive rate of testing. That is pretty phenomenal for a bunch of kids who have been tested as many times as they have been tested.”