The politics of hate 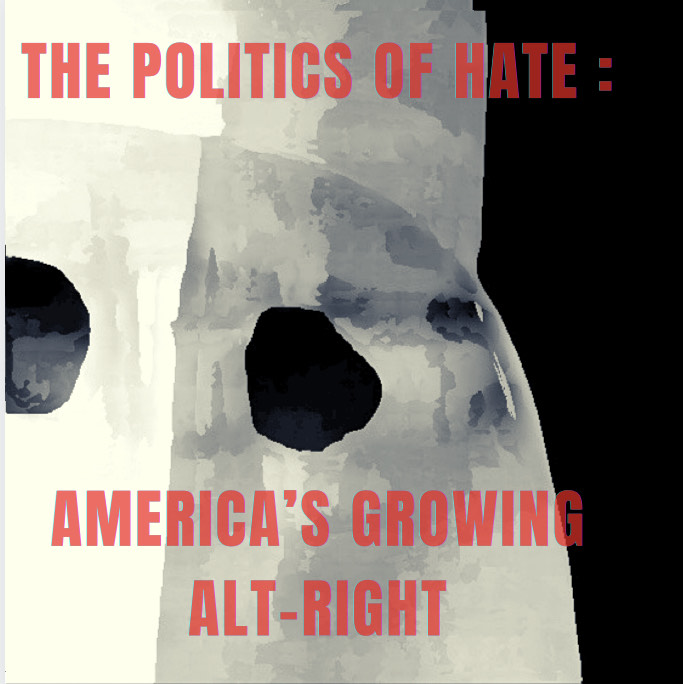 President Donald Trump’s recent defeat makes him the 11th sitting president in U.S. history to be denied a second term in the White House; however, the self-described “alt-right,” an offshoot of conservatism mixing racism, white nationalism, anti-Semitism and populism, continues to grow. We cannot deny that millions of Americans voted for Trump in 2020 and voted to keep Republicans in nearly two dozen competitive Senate seats; Republicans also flipped one seat held by a Democrat.
President-elect Joe Biden has repeatedly proclaimed that Trump’s attempts to divide the country is “not who we are.” “Last Week Tonight” host John Oliver pushed back.

“Look, that is a really nice sentiment, but dividing America based on race, religion, gender and national origin has frequently been very much who we are,” Oliver said.

This sentiment of a forgotten past in America is shared by Gary Younge in his documentary, “Angry, White and American,” which details how racism has shaped America in the past and persists in a morphed form today.

“It’s easy to forget America was a slave state for over 200 years, an apartheid state where segregation was enforced by law for 100 years, and it was only 50 years ago that African Americans were guaranteed the right to vote,” Younge said in his documentary. “Now, America is at a new crossroads: Within one generation, white people will be a minority, and racial anxiety is building. Nearly half of southern white Americans think they’re under attack and a third think the country should be doing more to preserve white European heritage. The most extreme product of that anxiety is the newly emboldened far-right, now known as the ‘alt-right.’”

The majority of alt-right members are young white men who see themselves first and foremost as champions of their own demographic. However, apart from their allegiance to their “tribe,” as they call it, their greatest points of unity lie in what they are against: multiculturalism, immigration, feminism and, above all, political correctness. Trump embodies their core beliefs in many ways and has repeatedly made comments to the same effect as the alt-right’s, including racist sentiments concerning Muslims, African Americans and immigrants in addition to making sexist comments concerning women.

The rhetoric of the alt-right is alarmingly similar to that used in Nazi Germany.

“America was a white country, and it belongs to us. Hail Trump, hail our people, hail victory!” Richard Spencer, leader and founder of the alt-right, said during the American Renaissance Conference.

The alt-right believes the implementation of the Civil Rights Act of 1964 and the Immigration and Nationality Act of 1965 marked the start of so-called “white genocide” — the idea that whites in the United States are being systematically replaced and destroyed. Spencer and the rest of the alt-right advocate for an “ethno-state” dedicated to white Americans so white superiority can be restored to its “former glory” prior to this legislation. Many members of the alt-right have said racial genocide is the only long-term solution to preserving the pure white race.
Trump gained his political success by appealing to similar sentiments held by the alt-right. The call to “Make America Great Again” alludes to America being better when it was whiter.

“[‘Make America Great Again’] is a signifier for those who believe America was great during some point in the past they dare not name, knowing if they do, it would reveal a time when it was worse for people of color,” said CNN commentator Issac Bailey. According to the Washington Post, counties that hosted a 2016 Trump rally saw a 226% rise in hate crime.

“After Trump was elected, I believed anything was possible. His hat said it — ‘Make America Great Again.’ And we all know to make America great again, you would have to make it white again,” an anonymous Stormfront user commented.
The events in Charlottesville, Virginia, and a rise in hate crimes seemingly demonstrates that Trump’s political success have ushered the openly racist rhetoric and white supremacist groups into an era of greater legitimacy.

Trump made his allegiance to the alt-right abundantly clear with the selection of his administration filled with known alt-right or Republican extremists, starting with his selection of White House Chief Strategist Steve Bannon, CEO of Breitbart News. According to the Southern Poverty Law Center, Breitbart News can be described as “a white ethno-nationalist propaganda mill.” Breitbart News is a known alt-right media source responsible for publishing headlines such as “Would You Rather Your Child had Feminism or Cancer?”, “Birth Control Makes Women Unattractive and Crazy” and “There’s No Hiring Bias Against Women in Tech, They Just Suck at Interviews.”

Trump has implemented myriad policies that draw parallels to the ideals of the alt-right. At the same time, Trump’s administration has undercut the budget and staffing dedicated to investigating domestic terrorism within the Department of Homeland Security (DHS). Trump’s administration issued a number of bigoted and xenophobic policies such as the so-called “Muslim travel ban” and the separation of families at the border while virtually ignoring the crisis of extremist violence brewing in our own communities. These efforts are misguided to say the least, considering that from 2009 to 2018, right-wing extremists have been responsible for 73% of the extremist murders in the United States with an additional 23% being at the hands of Islamist extremists, not to mention that, in general, it has been proven that immigrants commit crimes at lower rates than native-born citizens.

“The federal government’s unwillingness to soberly evaluate this type of terrorism and work to defeat it in a consistent and holistic way is painful to watch, and it is costing lives,” said George Selim, senior vice president of programs at the Anti-Defamation League (ADL) and former director of the Office for Community Partnerships and Interagency Countering Violent Extremism Task Force at the DHS.

During Trump’s time in office, he has declared the border a national emergency and has used racist and hateful language, which many have claimed incited the mass shooting in El Paso. From the neo-Nazi murderer Heather Heyer in Charlottesville to the Quebec City mosque shooter, there have been more and more MAGA- and alt-right-inspired attacks. In 2018, ADL found that of the 50 murders committed by extremists, 49 came at the hands of right-wing extremists, with white supremacists accounting for 39 of those murders.

During Biden’s term, it will be imperative to undo the legitimacy Trump has given to the alt-right. The president-elect must reprioritize investigation into right-wing extremist groups that insight acts of domestic terrorism. Every American should stay diligent in their efforts to ensure the alt-right does not gain further momentum.

So what can we do? Vote! Vote! Vote! Ensure that no more radical Republicans are elected to our Congress. Do not fall asleep at the wheel: Continue to vote in 2022, 2024 and so on to ensure the integrity of our nation is maintained. We certainly do not need another David Duke in office, nor do we need anyone associated with Richard Spencer and the alt-right. Trump definitely mainstreamed white supremacist rhetoric, but even with Trump out of the White House, the alt-right will still persist and grow unless we as Americans stay actively engaged in our democracy.