UTSA puts up 52 points in huge win against UTEP 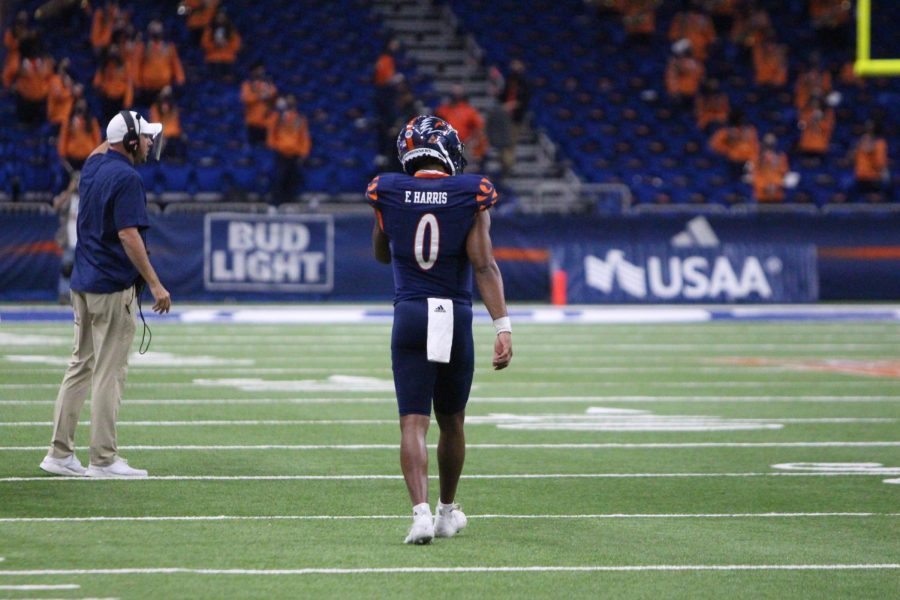 Quarterback Frank Harris walks over to talk to Head Coach Jeff Traylor during a game against Army. Harris was sensational against the Miners, and its clear that Traylor has managed to light a fire under his offense.

UTSA’s homecoming game did not disappoint. The game against UTEP was entertaining from start to finish and featured everything from big play offense to remarkable special teams plays. Quarterback Frank Harris looked better than he has at any other point in the season and led UTSA to a massive victory. UTSA’s junior quarterback completed 22 out of his 26 passes, threw for over 300 yards and scored a total of five touchdowns. He was smart, efficient and aggressive throughout. The running game, despite missing lead tailback Sincere McCormick, managed to continue its efficiency. Junior running back Brenden Brady took over for McCormick and rushed for 124 yards. The performances by Brady, Harris and the rest of the offense helped UTSA cruise to a 52-21 win on Saturday afternoon.
The first quarter started in rather typical UTSA style. UTSA took their first possession and got kicker Hunter Duplessis just close enough to hit a field goal. The importance of Duplessis’ range was on full display once again; he nailed a near-50 yarder to put UTSA up early. UTEP was forced to punt on their next possession. Harris and the UTSA offense quickly got out of their own territory and pushed into the opposing side of the field. On a first down from the UTEP 46, Harris unloaded a bomb to wideout Zhakari Franklin on an outside fade route. Franklin was wide open, and the pass was perfect. As Franklin secured the pass and crossed the goal line, UTEP cornerback Durón Lowe punched the ball out and secured the fumble in the end zone, giving UTEP possession at their own 20 yard line.
The next UTEP drive ended in a 52-yard touchdown pass from quarterback Gavin Hardison and put UTEP up 7-3. Right before the first quarter came to a close, the UTSA offense lost the ball on a high snap that went over Harris’ head. The ball was secured by UTEP just outside the UTSA 10 yard line. It appeared for a brief moment that UTSA’s mental mistakes would once again create problems that would put UTSA at a disadvantage. However, the defense was able to hold UTEP out of the end zone and force a short field goal attempt.
Miraculously, UTEP’s kicker Gavin Baechle missed not one but two attempts after a roughing-the-kicker penalty was committed by UTSA on the first attempt. This gave UTSA the ball back deep inside their own territory, but Harris and the passing game quickly made their way down the field. The drive ended with a short touchdown pass to wideout Brennon Dingle and helped UTSA regain the lead by a score of 10-7 early in the second quarter. UTEP responded with a touchdown of their own to make the score 14-10 only for Harris and the offense to strike back quickly with a 35-yard touchdown to Franklin.
With the score at 17-14 in favor of UTSA, UTEP secured the ball on the ensuing kickoff and returned it 95 yards to the UTSA 5 yard line. The positive emotion from the Franklin touchdown was quickly sucked away from the crowd of almost 7,000 people as UTEP punched the ball into the end zone a few plays later to regain the lead. The offense returned to the field with 58 seconds left in the half, down 21-17.
Given how the offense usually operates, run centered with short passes, a scoring drive was somewhat unexpected. Harris quickly proved that expectation wrong, completing a 17-yard pass to Tykee Ogle-Kellogg. That was followed by an 18-yard run from Brady, who got UTSA down to the 35 yard line. Harris did the rest, escaping the pocket and sprinting to the end zone for his third touchdown of the half. The crowd erupted as UTSA took back the lead and entered halftime up 21-24.
As UTSA and UTEP came back out onto the field for the second half, fans braced themselves for the continuation of a tight and exciting game. The third quarter did an excellent job of easing the tension. Harris and the offense came out on fire, and so did the defense. Harris threw for another touchdown, this time caught by Ogle-Kellogg, and ran for another one himself later in the quarter. UTSA entered the final quarter of play with a commanding 38-21 lead. They quickly scored again a few minutes into the final quarter off a 1-yard scramble from running back Kaedric Cobbs, making the score 45-21.
At this point, it became clear that UTSA had the game secured. The final quarter even featured the return of quarterback Josh Adkins, who hadn’t seen the field since suffering a broken collarbone against UAB on Oct. 3. UTSA dominated UTEP, and the clock hit zero with the score at 52-21. Level of competition has to be factored in, but it was an especially positive sign to see UTSA perform at this level. Harris was especially impressive, and the team did a good job of making up for the losses inflicted by the COVID outbreak last week.
UTSA travels to play Southern Mississippi next Saturday and will look to secure their sixth win of the season. UTSA has already surpassed the win totals of five of their last nine seasons and could come close to their all-time best record of 8-4 this year.