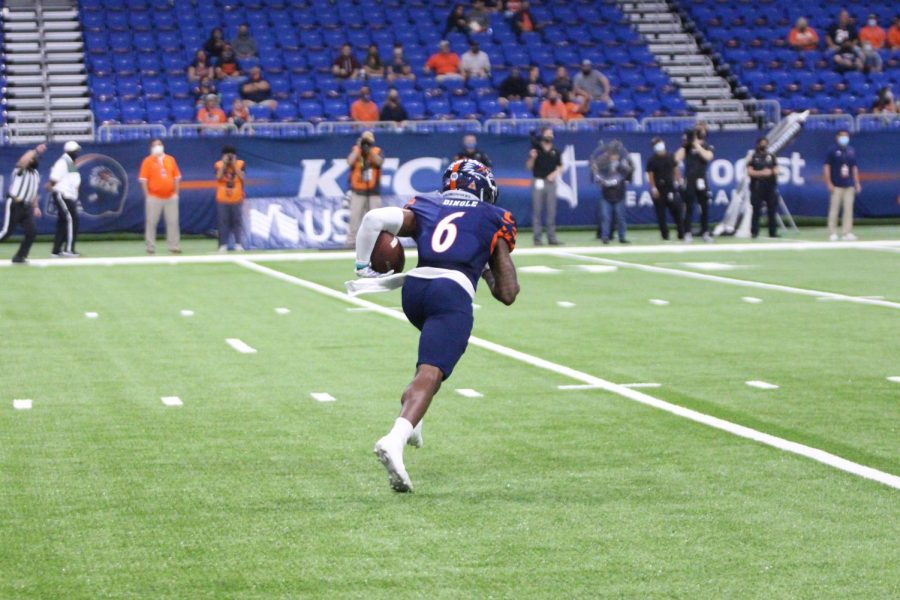 Wide receiver Brennon Dingle returns a kickoff during UTSA's game against Army in early October. Dingle and the rest of the offense hope to put on another show this weekend in Mississippi

UTSA dominated the University of Texas at El Paso (UTEP) last Saturday, and their record-breaking 600-yard offensive performance was a sight to behold. It was an incredible victory, but it is now in the past and the season must go on. UTSA has now shifted their attention to the University of Southern Mississippi.
Southern Mississippi stands at 2-6 and is coming off a 10-7 loss to Western Kentucky University. Both UTSA and Southern Mississippi are 2-3 over their last five games, but UTSA started 3-0 and has battled through a significant amount of injuries, mainly at the quarterback position. Southern Mississippi struggled out of the gate and has just recently found a bit of traction. Their quarterback, Jack Abraham, has a remarkably comparable statistical resume when put next to UTSA’s Frank Harris. Both quarterbacks have thrown for seven touchdown passes and four interceptions on the season. Abraham has a slight advantage in both completion percentage and total yards, but he and Harris have played at a similar level through the air. The difference is that Harris is a much more capable scrambler.
Southern Mississippi also has Frank Gore Jr., the son of veteran NFL running back Frank Gore, in the backfield. Gore Jr. has played well in his first year of college, averaging close to five yards per carry. He splits the carries on the ground with senior Kevin Perkins. Perkins is a bigger player and is often featured near the goal line, as evident by his six touchdown runs so far this season. The Southern Mississippi offense has relied heavily on their running game and averages 151 yards per game.
Taking away the opposing running game should once again be UTSA’s focal point. UTSA has the talent to do it. They did not allow a single point after halftime against UTEP, and they continued to display their opportunistic playing style. While their success has been very apparent this season, an anomaly was thrown their way just before the UTEP game in the form of Defensive Coordinator Tyrone Nix being placed on administrative leave. Nix’s absence is related to an internal investigation, which the team has decided to keep private until further notice. His absence did not seem to have a negative impact on the defense’s play on Saturday, but it will be interesting to see how they perform in the future.
UTSA seems to be getting back to full strength as they aim for a 6-4 record. The team’s COVID-19 outbreak looks to be under control, and the end of contact tracing will hopefully return a handful of players back to the field. Harris looks to have recovered well from his knee injury, and quarterback Josh Adkins has also returned from a collarbone injury. Sincere McCormick will likely make his return from a one-week absence as well after missing the game against UTEP. The health on the offensive side and the continuation of the defense’s level of aggression is an encouraging sign for UTSA as they travel east. UTSA kicks their game off against the Southern Mississippi Golden Eagles at 2:00 p.m. in Hattiesburg, Miss. this Saturday.