Athlete of the Week: Frank Harris 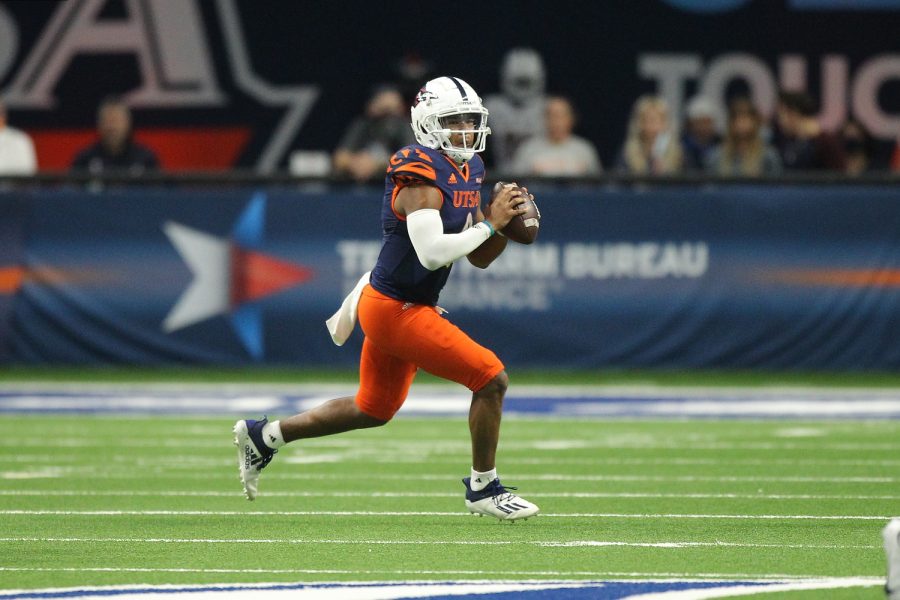 Frank Harris escapes the pocket and looks to pass downfield during UTSA's 52-21 victory over UTEP.

After facing many difficulties during his UTSA football career, quarterback Frank Harris was determined to get back on the field and show San Antonio just what he is capable of. This past weekend, UTSA took on UTEP and dominated them 52-21. Harris completed 22 of 26 passes for 312 yards, three passing touchdowns, zero interceptions and had 43 rushing yards with two more scores on the ground.

Harris, a sociology major, is set on working towards getting his master’s and finishing his football eligibility to achieve his goal of one day becoming a professional football player in the NFL. He also mentioned a few of his backup plans.

“I do have years of eligibility left, but I want to graduate and work on my masters and use my years,” Harris said. “After, hopefully advancing to the next level. If that does not work out, maybe join law enforcement or become a coach.”

The San Antonio native began playing football at the age of five, but being a football player was not always what he dreamed of becoming.

“Honestly, growing up, I wanted to be a professional cowboy,” Harris said. “I wanted to ride bulls, and then I realized that was not the profession for me. After watching people like Vince Young — as a kid, he inspired me to play quarterback and fall in love with the game. I knew that this would be a unique thing to do if I was able to make it to the next level.”

Harris also spoke about some of the positive aspects that helped him commit to UTSA football.

“When I first started the recruiting process, I wanted to go far away from home,” Harris said. “Then, after talking about it with my family and praying, I decided to stay close so that my family could come and watch me play. I am glad I made that choice; I love everything about UTSA, and I am here for a reason. I love the vibe of UTSA, the culture, the environment, and it was not too far from home. It was a great feeling of getting some people from San Antonio to stay here. We all grew up together, and it is really an unbelievable feeling knowing we grew up from little kids and this was a dream of ours. Now we’re on the next level playing together, and it’s great to know our dreams are coming true.”

Before his games, Harris has a habit of listening to a more calming genre of music in order to prepare himself for the field.

“When I have my headphones in, I usually listen to a little bit of Durk — nothing too crazy,” he said. “I have a chill vibe so I can get my mind right instead of the crunk stuff that my teammates listen to. As soon as I take my headphones off, NBA Youngboy is playing, and my teammates are going crazy. I mostly turn on Durk, Derez De’shon. I really try to listen to calm music so I don’t get too anxious or worked up before the game.”

Harris has more football eligibility ahead of him and more memories to make, but his most memorable moment in his UTSA football career so far was during his redshirt freshman year.

When Harris is not preparing and working out for football, he enjoys hunting.

“I love to go hunting and fishing; I am really country. I grew up with horses, riding horses, but this definitely gets everybody by surprise,” he said.

Being someone who aspires to go to the NFL, Harris talks about key athletes who inspire him and who he models his game after.

“Michael Vick, people like him; that’s the reason I wear number 7,” Harris said. “I model my game after him and guys like Kyler Murray, Lamar Jackson, Cam Newton and Russell Wilson. These are guys that are dual threats: They can run the ball, they can pass, they can do it all. They open lanes for guys like me who play similar to them.”

Being a team leader comes with being a quarterback. Harris discussed how he steps up and leads the team.

“I embrace the leadership role; I try to lead the offense and be a leader all around,” Harris said. “Keep everyone accountable. Push guys even when they do not feel like being pushed. Every day I get out there and lead in every way possible. As a quarterback, everyone looks at you, especially offense. You have to keep your head and be positive because those guys feed off of you.”

Harris and the rest of the Roadrunners are looking forward to competing for another win this Saturday against Southern Mississippi University and becoming bowl eligible this season.