Men’s basketball aims for a winning season despite roster changes 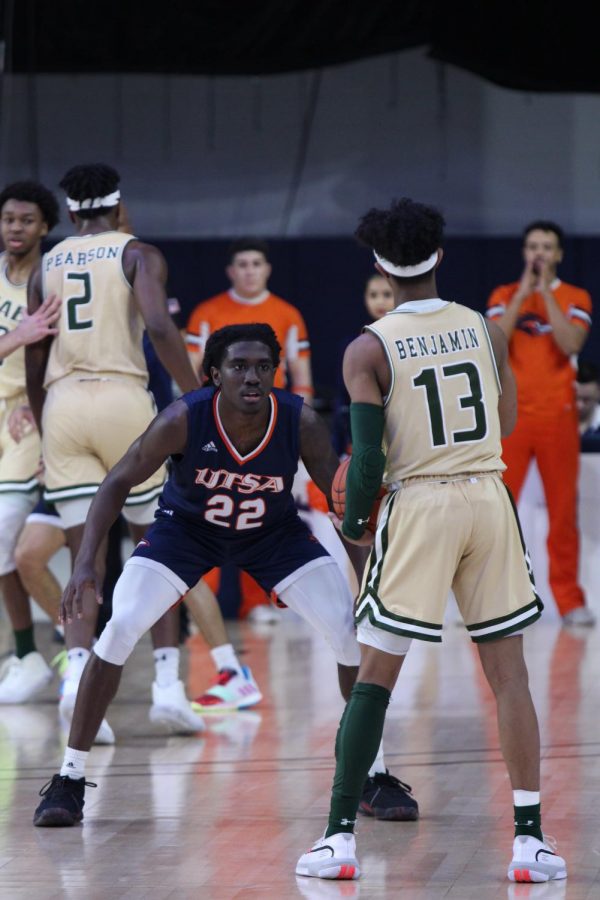 Keaton Wallace gets into his defensive stance as UABs Jalen Benjamin brings the ball up the court in last years Conference USA tournament.

Coming into the 2020-2021 UTSA men’s basketball season, fans of the Roadrunners will have a lot to look forward to. Looking at the roster, the team has gone through huge changes when it comes to the bench but has kept their star power in guards Jhivvan Jackson and Keaton Wallace. While the team has lost important people such as graduated seniors Byron Frohnen and Atem Bior, there is a huge cast of new young players looking to make a name for themselves. This upcoming season looks very promising if UTSA can fix their big issues from last season and get the new young players integrated into the team quickly.
Last year, UTSA had a disappointing season, finishing 11th in conference out of 14 teams. UTSA came into the playoffs as the 11th seed and faced the seventh-seeded UAB in the first round, losing 69-74. While this loss was disappointing, it was to be expected; UTSA was committing too many fouls and were not getting rebounds. These problems plagued UTSA the whole season, which lost them many close games, making them the 13th out of 14 teams when it came to defensive rebounding.
While the defensive side of the ball may have been lackluster, the offensive side of the ball was UTSA’s saving grace. In Conference USA, UTSA had the best scoring offense, which was led by Jivvon Jackson and Keaton Wallace, Jackson being first in overall scoring in the conference and Wallace second. Given UTSA’s poor defense and explosive offense, many UTSA games turned into shootouts. If UTSA can use this off season to get better on the defensive side of the ball without committing fouls, then the sky’s the limit for this team.
Comparing this year’s team to last year’s is not fair due to the amount of personnel change that has gone on this offseason. 11 people have either been added or have departed from the team over this offseason. As previously mentioned, Frohnen and Bior have graduated, but Makanai Whiteside, Knox Hellums and Austin Timperman have departed from the ‘Runners. While Timperman and Whiteside did not see a huge amount of play time, Hellums, Frohen and Bior all played huge minutes for UTSA and will be a major loss for the team.
While UTSA has lost some major pieces to their team, they acquired some transfers and freshmen to help with the holes. Starting with the transfers, Cedrick Alley Jr., a junior coming from the University of Houston, played in 37 games with 16 starts as a redshirt freshman. During his time at Houston, he was named to the all-tournament team in a Men Against Breast Cancer Cougar Cup and was named American Athletic Conference Freshman of the Week twice.
The next transfer for UTSA is sophomore Artan Jabbar, coming from Dallas Baptist. Jabbar played in 13 games, and during that time, he averaged 9.6 points and five assists.
The most notable of the freshmen bunch is Jaja Sanni from Clear Lake High School. Sanni was ranked the 25th best player in the state of Texas during his time in high school.
The other high school recruits are Jordan Ivy-Curry from La Marque High School, Lachlan Bofinger from Australia and Isaiah Addo-Ankrah from Second Baptist High School. With these new ‘Runners being added to the team, fans will hopefully get to see a new level of play from UTSA.
While this year is looking to be a great one, it also may be the last great year for a while. This year, Jackson and Wallace, who have been the cornerstones of this team, will be seniors, so UTSA needs to get somewhere before they leave. While the pressure will be on everyone to perform, players such as Sanni and Jacob Germany will begin feeling even more of that pressure.
Sanni is a freshman, but people already have high hopes for him. He will be in the same place Germany was in last year. Last year, there was a lot to be desired from Germany’s play. While Germany played well when he was in, he did not see the court much. If UTSA is going to make any noise this year, these two players in particular need to step up and take the pressure off Jackson and Wallace to perform.