‘Runners survive a close one in Mississippi, are now Bowl eligible 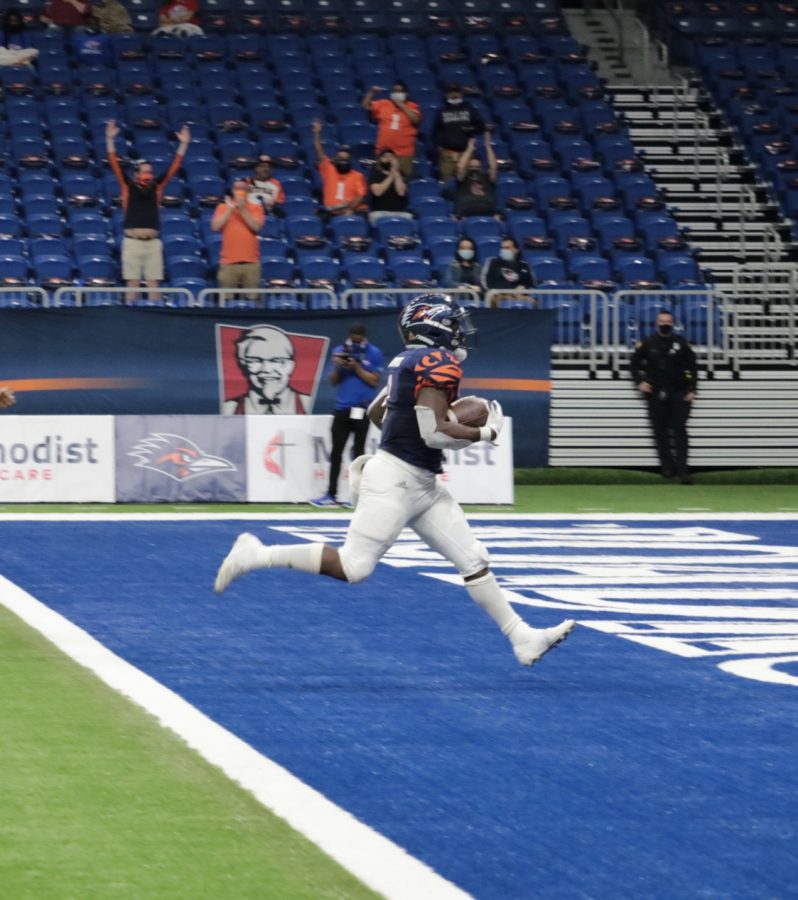 Sincere McCormick rushes past every defender on the field and into the end zone in a game against LA Tech earlier this year. McCormick did much of the same after missing last weeks game, and is now UTSA's single season rushing record holder.

UTSA’s game against Southern Mississippi wasn’t expected to be this close. Despite some early struggles, UTSA walked away with a victory over Southern Mississippi by a final score of 23-20. A monster effort from Sincere McCormick (173 yards and two touchdowns) as well as a series of clutch stops by the UTSA defense helped put them over the top. The UTSA offense shook off a slow start in the first half to pound the Southern Mississippi defense into submission in the second half on the back of 29 run plays and 36 total plays called.
Returning to action this week after missing last week’s demolition of UTEP for the birth of his child, McCormick made up for lost time by ripping off large chunk plays when UTSA needed him most, helping to lead the team to their sixth win on the season. McCormick set the single season rushing yardage record for UTSA in the process.
Coming off his best game ever as a ‘Runner, quarterback Frank Harris struggled most of the game, completing 12 of 19 passes for 71 yards, a touchdown and an interception. Harris, however, did secure a crucial third down pickup at the end of the game, a quarterback keeper off a fantastic fake-option pitch to keep the clock ticking in UTSA’s favor.
After trading three and outs to begin the game, the Southern Mississippi offense connected on a couple of big plays down the field before the UTSA defense finally stabilized and held them to a field goal. Attempting to respond on the ensuing drive, Harris threw an interception to hand the ball back to Southern Mississippi. On the following drive, the UTSA defense made a stand in the shadow of their own goalposts and Trevor Harmanson delivered a great play, shutting down a fake field goal attempt by Southern Mississippi to keep the score at 0-3.
After continued struggles on offense, the UTSA defense would make a play to try and provide a spark, forcing a fumble out of Southern Mississippi’s Tate Whatley that, after a bungled recovery attempt by the defense, rolled out the back of the end zone for a safety. The offense once again failed to capitalize, however, and was left with just 33 total yards after their first four offensive drives.
Another strong series by the UTSA defense handed the offense excellent field position, and they capitalized as Joshua Cephus caught a beautiful jump ball from Harris to take a 9-3 lead late in the second quarter. Southern Mississippi responded on their next drive, though, and after UTSA safety Antonio Parks was ejected for targeting, Whatley found his senior wide receiver Tim Jones for the score, allowing Southern Mississippi to regain the lead at 9-10. A late UTSA drive sputtered out, and they ended the first half down by one with only 95 yards of total offense.
The UTSA offense finally sparked to life to begin the second half, though, as McCormick took a handoff through a hole on the left side and turned on the jets for a 69-yard touchdown run to hand UTSA a 16-10 lead. Southern Mississippi attempted to respond, but Whatley airmailed a ball deep in UTSA territory, and Rashad Wisdom came up with a huge interception and return, putting the ball back across midfield.
The UTSA offense, now fully in rhythm, put together a bruising drive on the ground capped by a 1-yard dive over the pile by McCormick for his second touchdown of the game to extend the lead to 23-10. After the team’s traded three and outs, Southern Mississippi drove down the field quickly off the back of poor tackling by the UTSA defense before the defense held their ground and forced a field goal to keep a 23-13 lead.
The UTSA offense attempted to milk the clock to start the fourth quarter, but a handoff to McCormick on fourth and one was stuffed around the Southern Mississippi 40-yard line. Southern Mississippi immediately capitalized on this as Frank Gore Jr., son of future NFL Hall of Famer Frank Gore, took a short pass from Whatley, made a single cut by three UTSA defenders and took it 51 yards for the touchdown to draw Southern Mississippi within a field goal.
The UTSA offense suffered a quick three and out, handing the ball back to Southern Mississippi. Called on to preserve the lead, the UTSA defense delivered a huge play, batting a ball back to Whatley and dropping him well behind the line of scrimmage, resulting in a 19-yard loss and stopping the Southern Mississippi drive in its tracks on third down. The offense took it from there and, following a couple of clutch first downs on third and short, sealed out the close victory.
One of the major heroes in the victory was sophomore punter Lucas Dean. Dean was lights out punting the football, putting five of his six punts inside the 20 and averaging 47.7 yards per punt on a day when field position turned out to be crucial for UTSA.
The tight victory on the road brings UTSA’s record to 6-4 this season. In what has become a dream start for the Jeff Traylor era at UTSA, expected by almost no one outside of the program, Saturday’s victory kept UTSA’s hopes of a spot in the Conference USA title game alive. The win also gives the team a shot to reach seven wins for the first time since their first season in Conference USA back in 2013 under Larry Coker. This puts UTSA in a great position to receive their first bowl invitation since 2016.
Barring a reschedule of the previously postponed game against Rice, UTSA will close out the season on Saturday against North Texas.