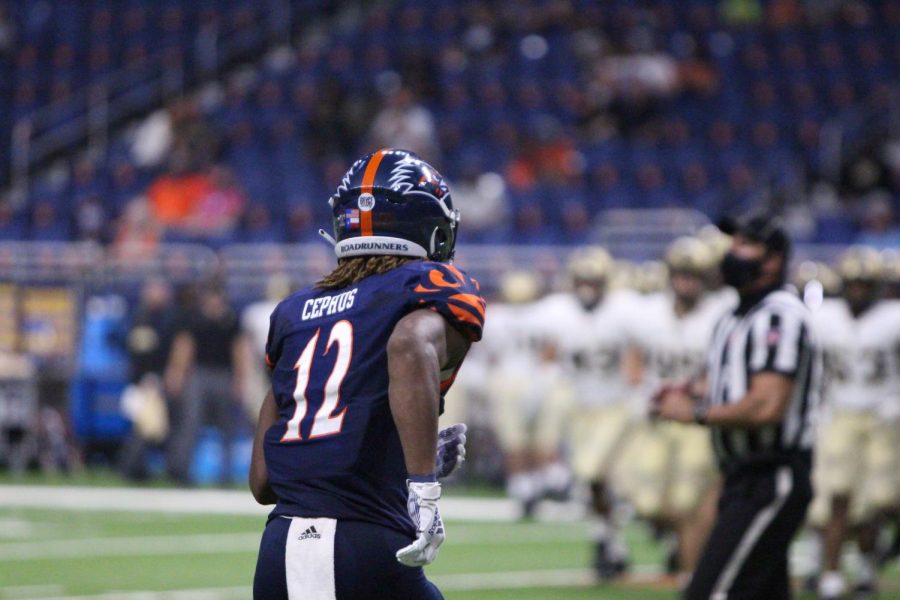 Wide receiver Joshua Cephus jogs onto the field during UTSA's game against Army. Cephus and the offense will need to score early and often if they hope to overcome North Texas.

Following last week’s 23-20 grind-it-out slugfest against Southern Mississippi (2-7), UTSA football is all set for their regular season finale against North Texas. The win over Southern Mississippi vaulted UTSA to the top of the West division standings of Conference USA and gave them a chance at advancing to their first C-USA conference championship game in school history.
Running back Sincere McCormick returned after a one-game absence for UTSA and torched the Southern Mississippi defense for 173 yards and two touchdowns in the victory. With the regular season finale upon us, UTSA is primed to finish the regular season with the most wins in school history since 2013 if they defeat North Texas this week.
North Texas, like many teams this season, has had their schedule marred by COVID-19 cancelations and postponements. Saturday’s clash with UTSA will be just their seventh game so far this year, and they enter the contest sporting a 3-3 record, 2-2 in conference play. North Texas boasts wins over Football Championship Subdivision schools Houston Baptist (1-3), Middle Tennessee (3-6) and Rice (1-2).
However, their losses have come against uneven competition, as they have been blown out by Southern Methodist University (7-2) and the University of North Carolina at Charlotte (2-3), and they also suffered a loss to a Southern Mississippi team that UTSA beat last week. As a whole, this UNT team is hard to get a read on, especially since last week was the first game they had managed to play in over a month. This will be the eighth all-time meeting between North Texas and UTSA, with North Texas currently leading the all-time series four games to three. Recent series history has been heavily tilted in favor of North Texas, as they’ve won four of the last five meetings, including three in a row and an absolute demolition last year in Denton by a final score of 45-3.
The major key for this week’s clash in the Alamodome will be slowing down an electric North Texas offense. Currently averaging 559.5 total offensive yards per game, fifth in the nation, this North Texas offense is dangerous and has the ability to move the ball down the field in chunks. They are led by their one-two punch at running back with senior DeAndre Torrey and freshman Oscar Adaway III, who both rank in the top 50 in the country for average yards per rush. For a UTSA defense that ranks 54th in the nation for rushing yards allowed per game at 149.8, shutting down these two backs will be crucial in limiting this high-powered offense.
The North Texas offense has also been very effective throwing the ball, currently averaging 302.2 yards through the air per game, 21st in the nation. North Texas has employed two quarterbacks so far this season, sophomores Jason Bean and Austin Aune. Aune has spent the majority of the season as the starter but was benched in favor of Bean against Middle Tennessee, and Bean remained the starter in their victory over Rice. If Bean does indeed line up under center, he brings a dynamic running element to his game that Aune does not, something the UTSA defense will need to be extremely wary of.
North Texas currently sits at 3-3 on the season; their defense is as bad as their offense is good, which should work in UTSA’s favor. North Texas surrenders a staggering 520.5 yards of total offense per game as a defense, fifth worst in the country, North Texas has been constantly abused by opposing offenses. Coming off a week when he missed multiple deep shots down the field against Southern Mississippi, Frank Harris will have numerous opportunities to make plays down the field, as North Texas has allowed 309.7 yards passing per game, 10th worst in the nation when accounting for teams that have played more than one game.

As expected from their overall defensive ranking, the North Texas rushing defense is also not very strong. Look for Joshua Cephus and Zakhari Franklin to be targeted early and often as the UTSA offense looks to establish the deep shot to open up the running lanes.
With just one game remaining in the regular season, McCormick currently ranks second in the nation in total rushing yards and has an outside chance at passing Iowa State’s Breece Hall, who he trails by 75 yards, for the national lead. McCormick is fresh off setting the single season rushing record for UTSA and is set to extend his record against a North Texas defensive unit allowing 210.8 yards rushing per game.
With a guaranteed winning record on the line for UTSA and a berth in the C-USA title game still very much in play, Saturday’s showdown in the Alamodome is an absolute must win. In what is likely to be a high-scoring back-and-forth contest, whoever touches the ball last may end up winning the game. UTSA will take on North Texas at 2:00 p.m., and the game can be streamed on Stadium.