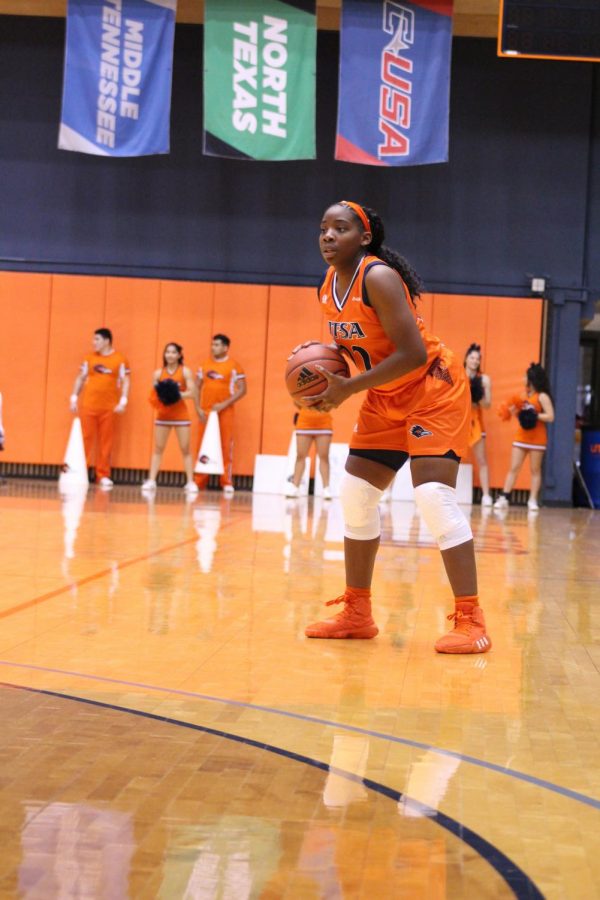 Ceyenne Mass surveys the court in a game last year against North Texas. Mass has appeared in nine games coming off of the bench for UTSA this season.

Approaching the midway point, the UTSA women’s basketball team has struggled for the majority of the season. Sporting a 2-9 record on the year heading into Friday’s game against Southern Mississippi, UTSA have lost seven straight games, with their last victory over a month ago on Dec. 15.

The season started promisingly enough with an 80-37 demolition over division three school Sul Ross State University. Things, however, quickly turned sour as UTSA dropped their next game to the University of Texas Rio Grande Valley 50-60. UTSA lost again the following week to the University of the Incarnate Word 63-69, before picking up their aforementioned last victory of the season against Northwestern State by a score of 73-55. A 47-71 loss to Sam Houston State ended their non-conference schedule with a 2-3 overall record.

The beginning of Conference USA (C-USA) play has been brutal for UTSA so far. Opening their conference schedule with losses to Rice, 53-78 and 57-69, North Texas, 78-85 and 52-76 and Louisiana Tech, 51-69 and 48-74, UTSA finds themselves at 0-6 in conference play on the year and having lost five of six by double digits. With only conference games remaining on the schedule there will be no respite against weaker, lower division competition to get things right, so UTSA will have to fix their issues against the rest of C-USA on the fly.

There are a number of different reasons for UTSA’s struggles so far this season. For starters, let us examine the offensive side of the ball. Simply put, much like last season, UTSA just does not score enough to stay in many games. Currently averaging 59.3 points per game, UTSA is ranked 264 in the nation out of 336 teams. Leading scorer and rebounder Adryana Quezada, who is averaging 15.3 points and 10 rebounds per game on the season, has only played in six games so far this season and has spent the last three games in a walking boot. Senior guard Karrington Donald is the only other player averaging more than ten points a game this season. On top of this, only five players are averaging at least five points a game this season. Three-point shooting in particular has been an area where UTSA has struggled, only converting on 19.3% of their shots from beyond the arc.  Another major area UTSA will have to improve on in the second half of the season is the number of fouls they are committing. Currently averaging 18.3 personal fouls per game, tied for 205 in the country, UTSA has surrendered ample opportunities for opponents at the line. Luckily, this has not hurt them so far as opponents are only shooting 59.9% from the free throw line this season against them, but as the season wears on this could become a bigger issue.

The defensive side of the ball, however, has shown improvement for UTSA so far this season. Last season UTSA surrendered 75.8 points per game which ranked 338 in the country, but this season they are only surrendering 67.5 points per game. This currently ranks 208 in the country, which is by no means great, but is a big improvement over last season. This has helped UTSA to only be outscored on average by -8.3 points per game on the season, a large leap over last year’s team that was outscored by 17.1 points per game. UTSA has done a better job of both creating turnovers and taking care of the ball when it is in their possession leading to a +1.0 turnover margin, far and away better than the -3.1 turnover margin the team had last season.

With just over half of the season remaining, UTSA still has time to turn things around. Coming off of their worst loss of the season last weekend it’s important that UTSA gets back on the right track and Southern Mississippi provides a perfect opportunity to do so. Southern Mississippi has similarly struggled this season, entering this weekend’s games with a 3-5 overall record and only 1-5 in conference play. Also important to note is that UTSA may be better than their record would indicate as so far, since they have played the top three teams based on records from C-USA and the schedule does get easier from here on out.

Going into the season, it was clear that this was going to be a growth year and nothing that has occurred so far has changed that notion. While the continued offensive struggles for UTSA remain concerning, the improvement on the defensive side of the ball and improved turnover margin do show some positive things to continue to build on in the second half of the season. Look for this young UTSA squad to continue to grow and improve in conference play throughout the rest of the season.

UTSA’s next home game will be on Saturday, Jan. 30 at 1 p.m. in the second game of a two-game series against UTEP.