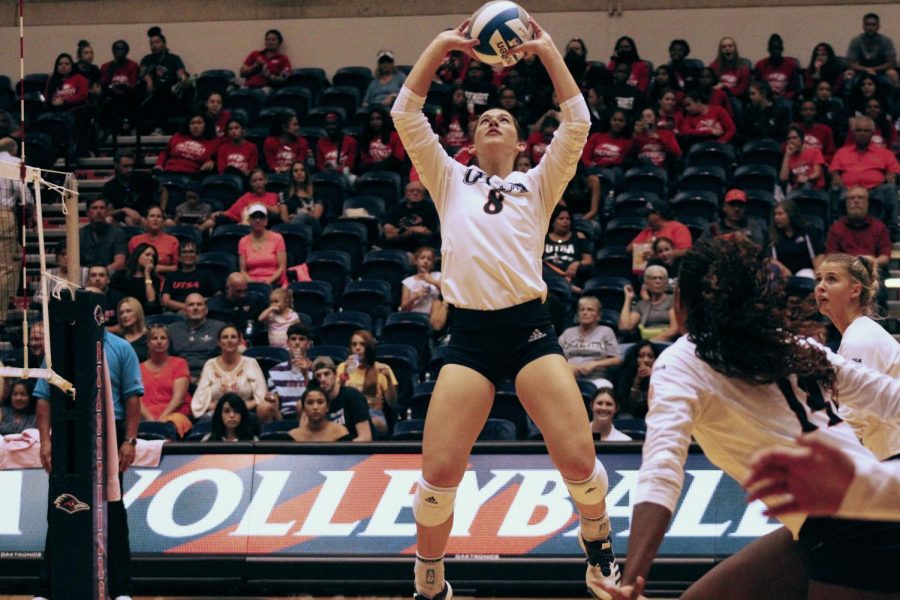 Courtney Walters sets the ball during a game last season.

Taking a look at the Roadrunners now is a very different view from last season. Through either graduation or transfers, the ‘Runners have lost seven players, including Emily Ramirez, Lydia Niebla, Jenna Patton, Brianna McCulloch, Kara Teal, Montse Castro and Madeline McKay. These losses will be noticed given that Teal had the highest hit percentage at UTSA, McCulloch recorded the highest kill percentage and the highest points and Ramirez had the highest service ace percentage. With such huge losses the remaining players plus new faces such as Kelsey Carpenter, Jessica Langridge, Alison Jennings, Amanda Ifeanyi, Alexis Pratt, Maddie Thayer and Alicia Coppedge will need to step up in order to have a solid season.

“It was a great offseason, even though we wanted to play it worked out great for us because we had just as many new people as we do returnees, so it was a great time for them to learn our system and for everyone to get to know each other,” Head Volleyball Coach Laura Neugebauer-Groff said.

The ‘Runners are coming off a 16-14 record (C-USA 8-6) which had them finish 6th in the conference. The ‘Runners last season had an explosive offense with the 4th most kills in the conference and 2nd highest service ace percentage, which carried them to many victories.

“We expect to be better, we lost one All-Conference player with Kara, but we returned a good group and some of the kids we got to transfer in and some of our freshmen are going to do some really good things,” Neugebauer-Groff stated on her expectations for her team’s offense.

While the ‘Runner’s offense thrived, their defense suffered, having the second lowest blocks in the conference. Being a middle of the pack team in digs means that many teams were able to score a high percentage on them.

“You’re always trying to better your weaknesses and then of course better your strengths,” Neugebauer-Groff said of the team putting an emphasis on improving the defensive play this offseason. “We were one of the best-serving teams, and we continue to get better at that too. A lot of the stuff we worked on in the fall was blocking and so forth and continued just to perfect our serves.”

If this new iteration is going to beat their predecessors the ‘Runners are going to have to pick up where they left off on their serves but continue to improve on their ability to read the play leading to more blocks.