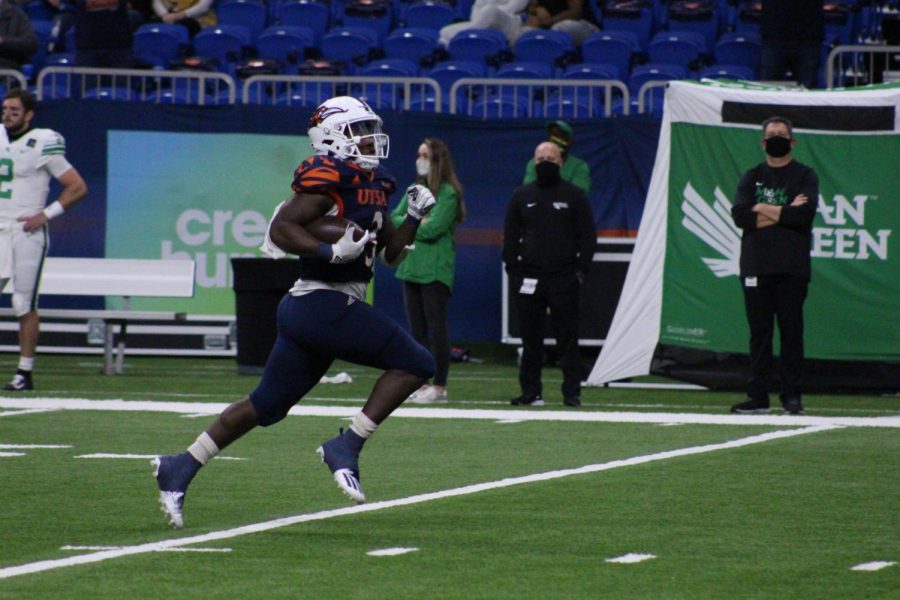 Sincere McCormick breaks away for a long touchdown run against North Texas on November 28th. McCormick would set the single game rushing record for UTSA in the win with 251 yards on the ground.

After the head coaching hire of Jeff Traylor on Dec. 9, UTSA football declared their 3rd head coach ever would change the direction of the program going forward.

He did not disappoint as he guided UTSA to a 7-5 regular season record in 2020. The last time UTSA reached seven wins was back in 2013. Traylor became the first head coach in UTSA history to start off his tenure with a 3-0 record. Traylor led the team to a bowl appearance in the First Responder Bowl against the Louisiana Lafayette Ragin Cajuns (10-1).  Unfortunately, after a valiant effort, the Roadrunners lost 24-31.

The  success of the season came amidst a pandemic, which was certainly not easy to overcome. There were capacity enforcements at the Alamodome, major testing protocols and Traylor contracted COVID-19 days before the First Responder Bowl, forcing the first-year head coach to miss the final game. Associate head coach and offensive coordinator, Barry Lunney Jr. took over head coaching duties for the game..

The 2020 season was definitely a unique period not only for the coaches, but the players as well. However, that did not stop sophomore running back Sincere McCormick from having an outstanding breakout season. After an impressive freshman year in 2019 where he attempted 177 rushes, gaining 983 yards and 8 touchdowns, McCormick raised his production even higher in 2020, This past season he attempted 249 rushes, gaining 1467 yards, averaging close to six yards a carry (5.9) along with 11 touchdowns. McCormick also set the single season school record for rushing yards last season. These numbers put him amongst the best running backs in all of college football. His performance all year rewarded him impressive accolades, but most significantly, he was named second-team All-American.

Alongside McCormick, special teams punter Lucas Dean also received second-team All-American honors. The sophomore accumulated 2621 punting yards throughout the season averaging 46.0 yards a punt, earning him the title of Conference USA Special Teams Player of the Year. Dean’s leg was dependable all season long and  expect him to continue pinning opposing teams deep every time he is called onto the field. In a further illustration of the special nature of this season,McCormick and Dean are the first pair of Roadrunners to be named second-team All-Americans in the same season. Look for the duo to continue their electrifying production and improve during the offseason.

All things considered, this past season for UTSA was quite successful. From being a below .500 team with a losing record for the past two years, to making a bowl appearance with an acceptable record of 7-5, it is safe to say the future looks promising for UTSA football. There is currently no word on any UTSA players declaring for the NFL draft, and  the NFL scouting combine has been canceled due to the coronavirus pandemic.  Still, more than a few players’ performances may warrant a look at the next level.

After such accomplishments, the team hopes to carry this momentum into next year. There seems to be a winning tradition under construction here. Look for Traylor to build around McCormick, and for  his production to increase even more next year. He has proven that he can raise his efficiency every year and his junior season is looking to be another record-setting season.

UTSA is set to open the season in Champaign, Illinois against the Fighting Illini football team, who are coming off a very disappointing season, losing the last three games and finishing with a 2-6 overall record coming in dead last in the Big Ten West Conference. With Coach Traylor at the wheel, look for UTSA to start the season off strong Sep. 4.