Men’s Basketball looks to improve during second half of season 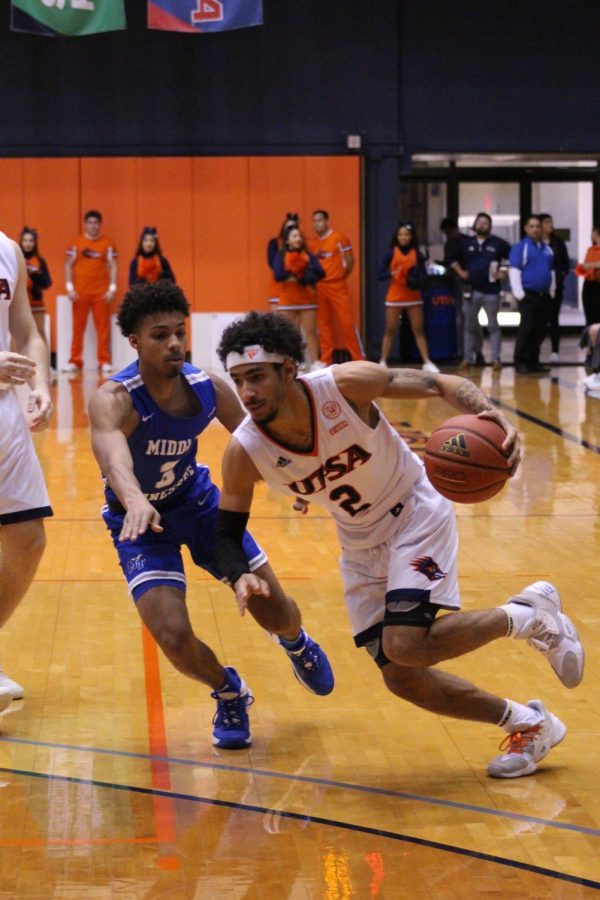 Jhivvan Jackson drives to the basket in a game against Middle Tennessee. Jackson currently leads the team in scoring this season, averaging 18.8 points per game.

After adding seven players to the roster, the UTSA men’s basketball team (5-8, C-USA 1-5) has begun its rebuilding period as the season progresses. In the midst of conference play, UTSA looks to turn the corner to a winning streak as they currently sit last in the Conference USA (C-USA) West standings.

With the loss of five players from the previous season due to graduations and transfers, UTSA has incorporated two redshirt juniors, four freshman and one sophomore into the roster. Redshirt juniors Cedrick Alley Jr. and Erich Parrish have assisted the offense, securing their places in the lineup. Parrish, who has started in every game this season, has shot 44% for the season, pairing his scoring with 61 rebounds, 38 assists and 18 steals. Alley Jr. adds depth to the guards on the roster after the loss of Knox Hellums, Adokiye Iyaye and Mikano Whiteside. Transferring from the University of Houston where he was 11 of 33 from the field and 4 of 19 from the 3-point line, Alley Jr. follows behind Parrish with 41 rebounds, 10 assists and 40.7% from the field.

Leading the freshman front, Jordan Ivy-Curry has appeared in all 13 contests this season shooting 37.2% from the field with 35 rebounds, 18 assists and 11 steals. Australia native Lachlan Bofinger follows closely behind Ivy-Curry shooting 54.5% from the field with 34 rebounds, four assists and three steals. Both Ivy-Curry and Bofinger have created a presence for themselves on the offense, allowing head coach Steve Henson to create a more diverse shooting repertoire.

UTSA has entered their last season with dual scoring threats Jhivvan Jackson and Keaton Wallace. Jackson is currently second in C-USA scoring standings with 226 points, averaging 18.83 per game. Shooting 45.5% from the field, Jackson leads the offense for another consecutive season. Wallace, the other half of the scoring duo, is currently 66 for 176 on the season. As Jackson and Wallace lead the offense, UTSA’s backcourt presence of centers sophomore Jacob Germany, senior Luka Barisic and redshirt junior Adrian Rodriguez has provided a strong force around the rim. UTSA has out-rebounded and out-blocked opponents this season, 506-494 and 41-37. UTSA brings talents from across the board, showing glimpses of being able to capitalize on the potential of this roster.

The 2021 season has brought a consistency of up and down performances for UTSA. The Roadrunners have struggled on the road this season with an away record of 0-7, but the team appears right at home in the Convocation Center, recording a home slate of 5-1. The preconference run for UTSA left the ‘Runners 3-3, setting the tone of the season. Beginning C-USA play, UTSA dropped three consecutive matchups against Rice and North Texas, ranked second in the C-USA West standings. UTSA has been consistently outscored in the second half stretch to lose in conference play.

The C-USA tournament in March has been reduced from 12 to eight teams to compete for the championship title, placing pressure on UTSA to increase their standing in conference play for a chance to end the season in Frisco. The ‘Runners will continue their conference play with series against Southern Mississippi, the University of Texas at El Paso (UTEP), Florida International University (FIU), Florida Atlantic University, Charlotte and first placed ranked C-USA West team, the University of Alabama at Birmingham.

The ‘Runners will be facing the Southern Miss. Golden Eagles tonight and tomorrow in the Convocation Center. Tipoff will be at 6 p.m. tonight and 3 p.m. tomorrow. UTSA will be hosting UTEP Jan. 28 before going back on the road to complete the UTEP series, then traveling to Miami, Fla. To take on the FIU Panthers.