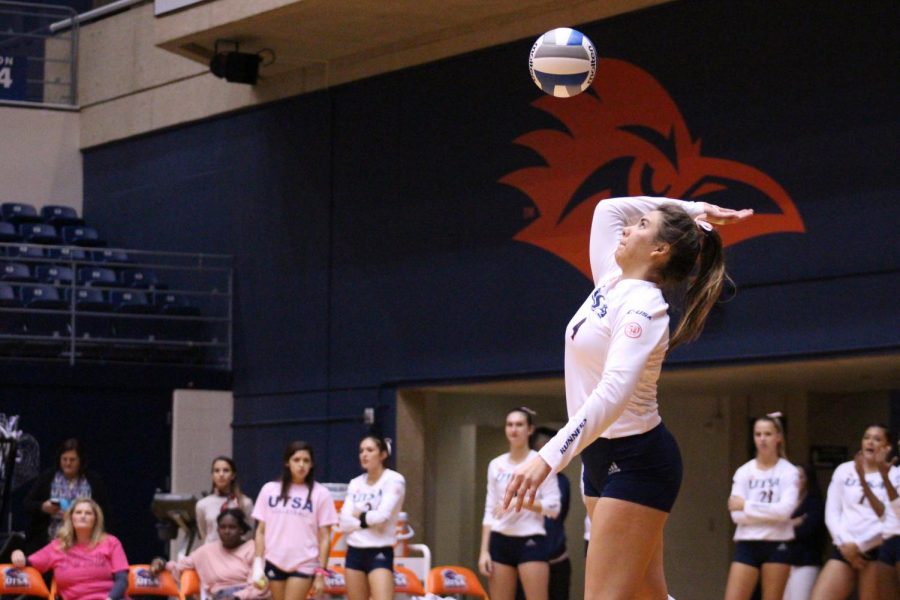 Hannah Lopez serves the ball into play for UTSA in a game last season. Lopez registered back to back double-doubles to begin the season.

The UTSA volleyball team (1-1) began their 2021 season last weekend in Corpus Christi with a series against the University of Texas Rio Grande Valley (UTRGV) Vaqueros and the Texas A&M-Corpus Christi Islanders. UTSA won a five-set matchup against UTRGV before dropping the second to the Islanders.

The Roadrunners were able to push past the Vaqueros in the fifth set of the match as three players registered double-doubles and a front row performance by freshman Amanda Ifeanyi propelled UTSA ahead by two to claim the match. After dropping the first set 22-25, the ‘Runners claimed back to back sets, 25-23, 25-16, with junior outside hitter Hannah Lopez registering 15 kills and 22 digs, sophomore outside hitter Hunter Coppola tallying 12 kills and 16 digs and sophomore setter Courtney Walters claiming 52 assists and 13 digs.

UTSA out-hit the Vaqueros in set four, but team errors allowed UTRGV to capitalize and win the set 27-25, launching a tie-breaker fifth set. Sophomore outside hitter Bianca Ejesieme contributed 12 kills, and Ifeanyi contributed a 21-kill presentation. To control the back row, junior libero Mia Ybarra registered 32 digs for the match, and senior defensive specialist Alexis Pratt tallied 11. UTSA won the final set, 18-16, securing the win for the first match of the season.

Finishing the weekend, UTSA faced the Islanders for a four-set matchup, leaving the ‘Runners down three sets, 1-3. UTSA claimed a close first set, 26-24, with Lopez and Walters registering their second double-doubles of the season with 15 kills and 13 digs and 42 assists and 12 digs, respectively. Coppola contributed 14 kills and five digs to the ‘Runners’ offensive front before the Islanders claimed a quick second set, 25-15, and rallied past UTSA for the third and fourth.

Ybarra led the defense for the second consecutive game with 16 digs and one ace. The Islanders claimed the third set, 21-25, hitting .312 as a team for the match. On the front line, Ifeanyi recorded 12 kills, and Ejesieme followed with six. UTSA hit a .206 for the match, dropping the fourth and final set to the Islanders, 24-26.

The ‘Runners will be traveling to New Orleans to take on the University of Tulane Green Wave at noon on Jan. 28 and Jan. 30 before returning to the Convocation Center for the first home game of the season. The first serve for the matchup against the University of the Incarnate Word will be at 1 p.m., Jan. 31.