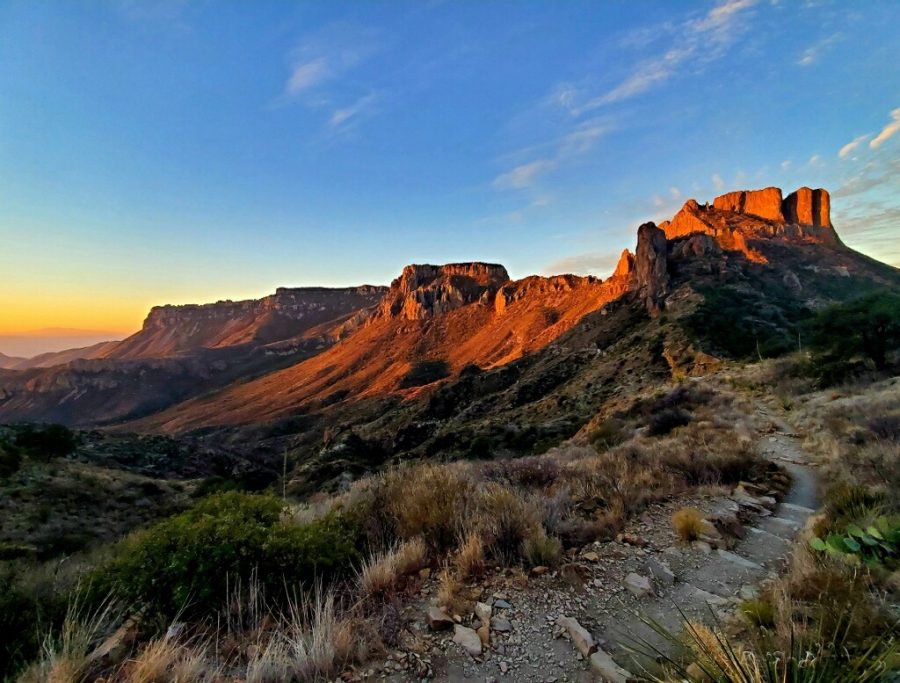 A trip to Big Bend National Park is an adventure that stretches far beyond the confines of the park, beginning first wherever the rubber meets the road. Hours spent on I-10 West are wondrous as the highway becomes a museum, with relics of the past strewn across barren landscapes backed by rolling hills that make their best impressions of mountain ranges.  The towns begin shrinking, but the feeling of freedom grows as Kerrville, Junction, Sonora, and Ozona all fade in the rearview. Fort Stockton stands as an outpost for Big Bend, with people from around the country flocking to see the only national park that can boast containing an entire mountain range.

385 South opens a remote world, a welcome trip far removed from the year we collectively endured. I had decided to leave early, hoping to experience Big Bend’s trails undisturbed. This meant driving by moonlight, a decision well made. The brilliance of the night sky is unrivaled along this stretch and into the park. The darkest skies in the country meant the chance to see constellations normally shrouded by city lights, stars glistening in incredible clarity above the highest peaks, and almost driving into an embankment while watching meteors streak across the sky.

Arriving early meant getting a parking spot to Lost Mine Trail. As the park roads wind through the mountain passes, small fires can be seen from miles away. Imagining veteran campers cooking their nutritious breakfast at 5:30 while eating a bag of gas station beef jerky,  it began to sink in that I may be out of my depth.

There it was; the trailhead for the most suggested hike in Big Bend (second only to Window Trail.) Having passed “Bear and Mountain Lion Country” signs along the way, it dawned on me that it may be a good idea to wait for sunlight to start the climb. As the great theater unfolded in the sky, the first of the hikers began to trickle in. Complete with headlamps and hiking equipment, gallons of water and what looked like MREs, I was now sure I was unprepared as I searched the truck for food to supplement my single Nalgene and few bags of trail mix.

Then the standoff began. After seeing a group pack gear for what seemed like an hour, the collective in the parking lot began waiting for another group to be the first up the trail. I watched as a set of eyes would drift to a tree destroyed by animal claws, and then that person would decide they had forgotten something else in the car or needed to recheck their gear. This dance went on until first light, when the largest of the groups began inching into the remote wilderness; trailblazers.

My previous experience with mountains had been repeatedly falling down a snowboarding trail once. Comfort came as I realized I was going in the opposite direction this time, and as the trail opened up, the scenery turned into a dreamscape. The mountain faces were glowing as an early morning sun cascaded over them, lighting a patina that covered boulders across the trail. Behind it was a deep red, a velvet cake baked into the stones. The morning sky was a blend of blues and pinks, oranges and yellows, set against the lush greens of vegetation that grew on anything that wasn’t completely vertical. The rugged terrain almost looked inviting as the light poured into the valley below. This place was surreal.

Working up the trail, my dreamscape became a nightmare when I realized I had ripped my pants. If you didn’t know, hiking etiquette dictates that people stopping for breaks let others pass. I avoided this at all costs. Having refused to pass, staring at trees, and taking pictures of nothing, I eventually confided in a trail buddy that my pants were goners. We shared a laugh, she assured me it wasn’t noticeable, and the rest of my pictures were taken sitting down.

The air had become rarified at the end of the trail; every breath could be felt circulating through my lungs. A spectacular view of the valleys set on a plateau housed a group of boulders with a tree grown straight through the cracks between them and a raven perched on its highest branch. The wind was incredible at this altitude, cutting through the layers of clothes but blending perfectly with the warmth of the rising sun. This was a place one could stay indefinitely. Perhaps the thin air had rendered my brain useless, but the feeling of conquering a goal was unmatched.

Big Bend is approximately 1,250 square miles of mountainous terrain set in a desert scenery. The vegetation is enchanting, with deeply colored purple cacti and Soaptree Yucca dominating the plains, and an array of geographically distinct trees that blend in at points where the elevation changes. The park is known for being booked solid for camping sites, and reservations should be made well in advance. Temporary closures are in place for some attractions, so do your research before making the trek. Big Bend National Park is a beautiful, challenging, and remote place that will test your mettle. And you know what? It’s worth every step.