Athlete of the week: Adrian Rodriguez 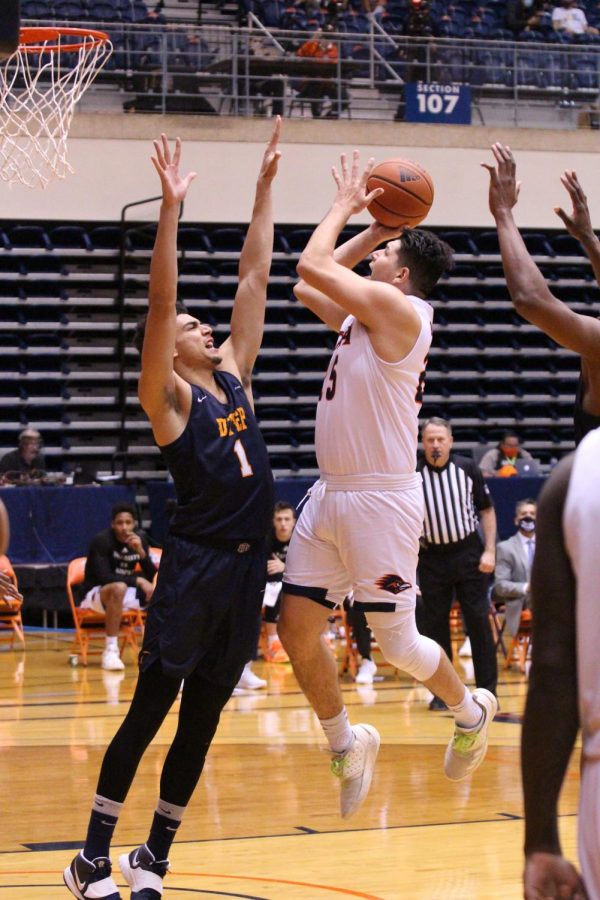 Rodriguez drives through contact to finish at the rim in a game against UTEP Thursday night. Thursday was Rodriguez's third consecutive start after appearing in his first 8 games of the season in a bench role.

For every great basketball team, there are a number of roles that need to be filled. Teams need a ball-handler, a dominant scorer, someone that can control the paint and a go-to defender to lock down the other team’s best player. Perhaps the most important role of all; however, is the glue guy, the player that keeps the team together and rallies his teammates into action. For UTSA Basketball this season, that player is Adrian Rodriguez.

The 6’7” Redshirt Junior from Tulsa Oklahoma’s stats don’t jump off the page upon first glance, currently averaging 2.1 points and 2.3 rebounds per game, but instead, it’s the little things that he does that make a big difference. He’s the definition of a player whose full contribution to the team can never be fully captured on the stat sheet. He plays an instrumental role in UTSA’s offensive system, creating open space for UTSA’s myriad of shooters through his off-ball movement as well as setting screen after screen. For Rodriguez, he wouldn’t have it any other way.

“I don’t really care about the box score, I don’t care how many points it says I have, or how many rebounds. My objective, I know that one of the best shots we can get is Jhivvan or Keaton wide open … my job is to get them open, set good screens, get the offense initiated, dive, cut, anything to make it easier.”

Rodriguez is completely team-oriented when it comes to his role and it shows in how UTSA has utilized him this season. Rodriguez has appeared in 11 games this season and made his first three starts of the season over the weekend in a pair of wins against Southern Mississippi Golden Eagles and last night’s victory over UTEP. For Rodriguez, it doesn’t matter when he’s out on the court because he’s ready to do whatever it takes to help his team get the win.

“No matter what my position is, I’m just going to come out and give my all, give my all to my teammates especially, and do whatever I can to help my team win.”

Rodriguez recognizes that there are so many different ways to impact that go beyond the stat sheet. He takes special pride in what he sees as his improvements as a leader this season.

“I think that more than any of the past years, my leadership and my talk, and my attitude … Just really getting everybody else to talk, getting the energy up whether that’s in the game, or on the bench.”

Observing Rodriguez on the sidelines, it’s clear that he takes his role as a leader very seriously and takes great pride in being the person responsible for energizing his teammates. The presence of a glue guy on any basketball team is an absolute must and Rodriguez is settling comfortably into that role on the UTSA team.

Off the basketball court, Rodriguez has also excelled in the classroom. Currently majoring in Mechanical Engineering, Rodriguez was named to the Conference USA Commissioner’s Honor Roll list for the 2017-2018 season.

Rodriguez and the rest of the ‘Runners will be back in action Jan. 30 at 8 p.m. for a road game in El Paso against the UTEP Miners. The game can be watched on ESPN+.