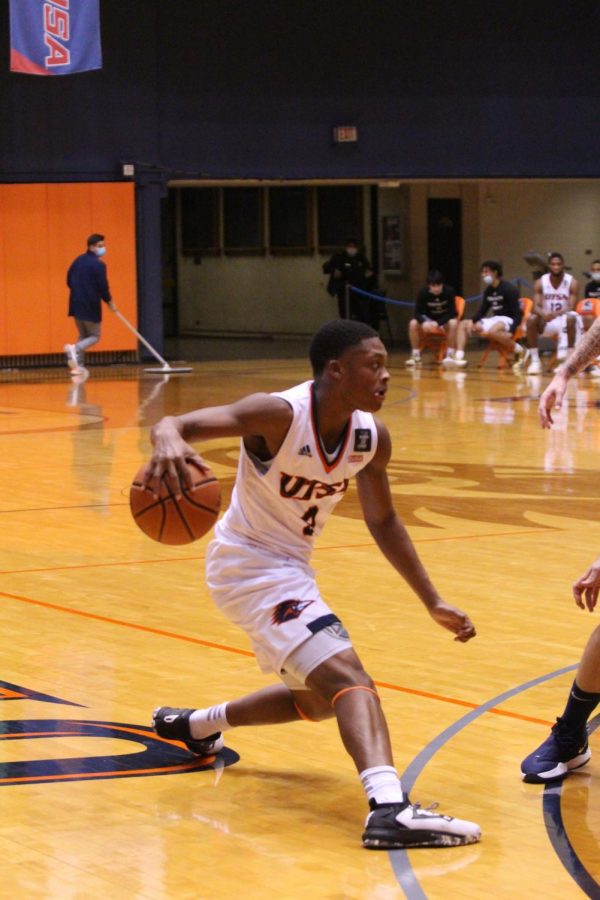 Jordan Ivy-Curry goes behind the back during the game against UTEP on Jan. 28. The game was Ivy-Curry's first ever career start and he would finish with 14 points.

The UTSA men’s basketball team (8-9, C-USA 4-6) was back in action last week for a two-game series against the UTEP Miners (8-8, C-USA 4-6). Over the weekend, the Roadrunners squared off with UTEP in San Antonio on Thursday, Jan. 28, and then again on Saturday, Jan. 30 in El Paso. As has been the case all season, the results were dependent on where the game took place. UTSA took the first game at home in a 86-77 victory before dropping the rematch on the road, scoring a season-low in points for a 51-69 loss.

The first game of the series tipped off on Thursday, and it started with a new look for the ‘Runners to start the game. Freshman guard Jordan Ivy-Curry made the first start of his college career. The change in the starting five from coach Steve Henson immediately paid dividends, and UTSA took control of the game midway through the first half, 21-11 off the back of a 13-1 run. UTSA would lead by as many as 16 points in the first half as they received strong contributions up and down the lineup. UTEP slowly chipped away at the lead, but UTSA held on for a 46-38 halftime lead.

In the second half, the ‘Runners came out slow and unsteady. They committed four turnovers in the first four minutes of the half and endured a 1-9 shooting slump from the field that included a four-minute scoring drought, allowing UTEP to come back and take a 51-53 lead early in the half. With the game appearing to slip from their control, UTSA responded with a surge down the stretch. With a six-point lead midway through the second half, UTSA upped the intensity and ripped off an 8-0 run behind a string of clutch shots from seniors Jhivvan Jackson and Keaton Wallace to go up 72-58 with just a little over a quarter of the second half to go. UTEP would again draw closer down the stretch, bringing the lead back down to eight points, but Wallace hit a dagger three-pointer to regain UTSA’s double-digit margin, and they would hold on down the stretch for the 86-77 victory.

It was a strong overall day for UTSA’s guards’ play as they enjoyed an excellent night from the field. Jackson led all scorers with 32 points, four assists and six rebounds; Wallace nearly reached a triple-double, finishing with 19 points, nine assists and eight rebounds, and Ivy-Curry finished with 14 points in his first career start. Cedric Alley Jr. also provided a huge boost off of the bench with nine points and seven rebounds.

The second game on Jan. 30 in El Paso did not go nearly as well as UTSA’s previous effort in San Antonio. UTSA once again rolled out a starting lineup that included Ivy-Curry, and they would quickly take a 6-0 lead. However, this was quickly erased by UTEP, and by late in the first half, UTEP held an eight-point lead at 18-26. UTSA would show some fight and respond with a 6-0 run to cut the lead to two, and the teams would continue to trade baskets down the stretch all the way to the end of the first half, where UTEP led 29-32. UTSA only being down by three at the half was impressive, with Jackson missing much of the first half due to early foul trouble and UTSA as a whole struggling from the field, shooting just 10-32 overall and 2-12 from three.

The second half started rough for both teams, with neither being able to gain the advantage. UTSA’s Eric Parrish layup midway through the second half tied the game at 44, but from there, things quickly turned sour for UTSA. An ensuing five-minute scoring drought from UTSA buried any chance they had of picking up the win as UTEP went on a 25-7 run to close out the game and walk away with a 51-69 victory at home. It was an absolute struggle up and down the lineup for UTSA as no one could ever get into a rhythm. Jackson battled foul trouble all game long and fouled out right before the end of the game, finishing with just seven points, one assist and three rebounds. Wallace was also off for most of the game, but did lead all UTSA scorers with 15 points and chipped in four rebounds.

It was a rough shooting night overall for UTSA, going just 18-61 overall from the field and 2-17 from three. The team was also outrebounded by a margin of 27-45 but did win the turnover battle 8-17. The series against UTEP served as a microcosm of the season as a whole so far for UTSA, with strong effort put in on their home court where they are now 8-1 this season, but struggling on the road where they remain winless at 0-8. The loss drops UTSA just one game above Southern Mississippi for last in group A of Conference USA. With the last-place team in the conference failing to qualify for the conference tournament and four road games remaining on the schedule, UTSA must find a solution to their road woes.