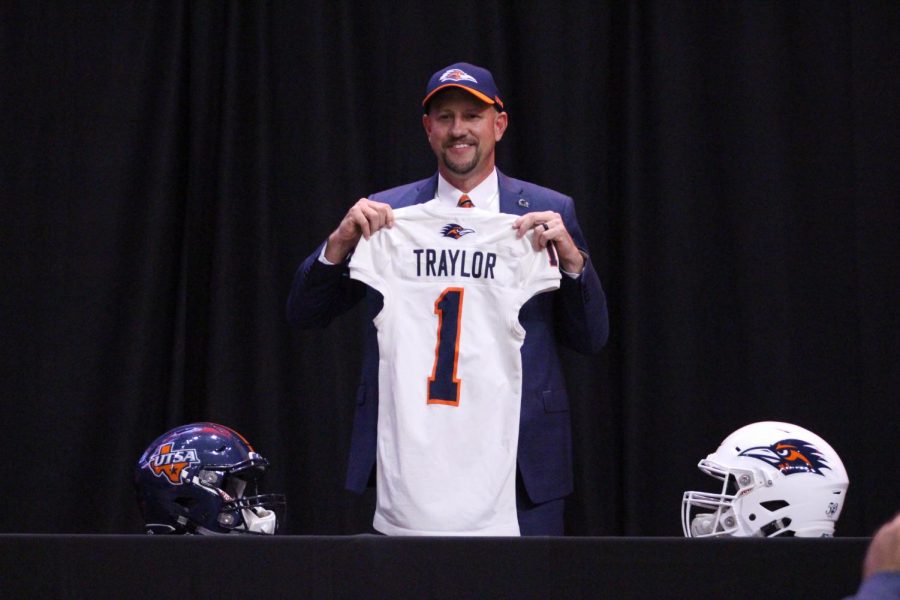 Jeff Traylor on the day he was announced as the new head football coach of UTSA. UTSA has secured their highest rated class ever and the #1 ranked class in C-USA in just Traylor's first full season of recruitment.

On Wednesday, Feb. 3, UTSA football announced their 2021 recruiting class on National Signing Day. The 2021 class is composed of 22 players, including the honorary signing of the younger brother of current Roadrunner safety Rashad Wisdom, Bryce Wisdom, who passed away last year due to a rare form of cancer. It was a fantastic signing day for UTSA, with both 247Sports and Rivals.com reporting that UTSA had their highest-rated recruiting class in school history and finished with Conference USA’s top-ranked class. This stands as the latest in a series of wins for Jeff Traylor and the UTSA program as a whole since he was named the third head football coach in the team’s history on Dec. 9, 2019.

The class of 21 players consists of 13 high school players, five from the junior college ranks and a further three players transferring from other major college programs.

“I was concerned because we didn’t have camps. We signed 13 high school kids. We tried to keep that number a little lower. We went higher on the junior college and the transfers because we knew those kids. We had already had those kids in camp, and we had real information on them,” Traylor said on how his program approached recruitment for this class.

The class also breaks heavily Texan, with 16 of the 21 recruits hailing from the state. Furthermore, eight of those prospects come from the San Antonio area. According to Coach Traylor, this is very much in line with what UTSA wants to do with its recruitment strategy.

“When Coach Rutledge, President Eighmy and Dr. Campos introduced me that day at that beginning press conference, we were very committed to starting in the San Antonio area and recruiting ourself out. We feel very confident, counting Bryce we have nine San Antonio area kids in our first complete class,” Traylor said on how his program has approached local recruitment.

The pandemic altered many of the traditional methods of college recruitment used for decades. Many colleges were unable to get any high school players into camps to help evaluate and get to know these players, leading to them not being able to get to know these recruits as well as they may have been able to in the past. However, Coach Traylor saw an advantage where some might have seen a disadvantage.

“How many steals did we get out of this deal? Because they (power five conference schools) don’t even know about them, but we knew about them. So, I’m going about it that way,” Traylor said.

The class is very consistent throughout, with 19 members rated as a 3-star prospect. The class shows talent up and down the board. Some of the notables of the class include: De’Anthony Lewis, a high school running back from current UTSA running back Sincere McCormick’s alma mater Judson High School, the reigning District 27-6A Offensive Player of the Year; high school quarterback Eddie Lee Marburger from Sharyland Pioneer High School, the reigning All-South Texas Super Team Player of the Year who passed for 3,365 yards and 36 touchdowns and ran for 1,177 yards and 26 touchdowns during his senior season; Steele High School outside linebacker Caleb Lewis, who earned first-team All-District 27-6A honors in 2020 and finished with 110 tackles, 35 tackles for loss, and six sacks during his senior season. In addition to Lewis, fellow Judson High School teammates, offensive linemen Kamron Scott and Robert Rigsby are also part of this class. Scott was named to the All-state team and Rigsby was a second-team academic all-state selection. Junior college transfer Ron Tatum III could be described as the headliner of the class, ranked as the sixth-best defensive end in the country by ESPN and was also ranked as the top player in Oklahoma according to 247Sports.

One of the most significant signings of the class, however, was the honorary signing of Bryce Wisdom. Wisdom passed away last year following a battle with kidney cancer but was still signed as part of UTSA’s class for this year.

“He was my favorite recruit, when I first got the job here, Coach Brown took me to see Bryce. I did that as a favor to Rashad and Coach Brown and I didn’t know I was going to fall in love with the kid…It means the world to me and I know it brought a smile to Richard and Diana’s (Wisdom’s parents) face and Rashad. I’m glad to be a part of that and he is a part of our class, I mean those kids really love Bryce, and they want this and I was glad to help,” Coach Traylor said when asked about Wisdom being a part of the 2021 signing class.

Coach Traylor is well aware, however, that success doesn’t just start and end with recruitment,

“It’s our job to develop them now, four or five years from now we’ll know the truth.”