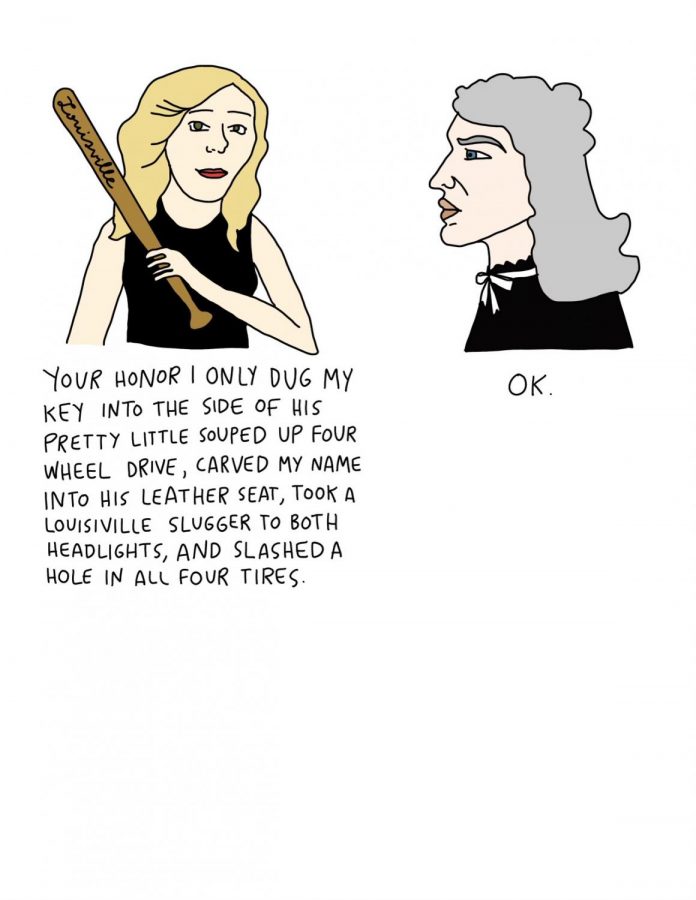 Just because your bar goes hard does not necessarily mean you should be locked behind bars. America regards most creative art forms as just that—creative fiction escape. One would not presume that Johnny Cash, who wrote the well-known song ‘Folsom Prison Blues,’ actually shot a man in Reno, or that Edgar Allan Poe buried a man beneath his floorboards, as depicted in his short story ‘The Tell-Tale Heart,’ simply because of their respective artistic endeavors on those subjects. The reason artists feel comfortable presenting their art without limitation is because artistic expression is protected as free speech under the First Amendment.

Yet, today rap artists are not extended the same protection under the first amendment. Rap lyrics have repeatedly been admitted as evidence in criminal trials. The ACLU describes the legal assault that is unique to hip-hop artists.

“Some art forms are seen differently by many courts,” said Emerson Sykes and Leila Rafei in an ACLU commentary. “Rap music, in trial after trial, has been treated as inherently incriminating.”

In 1991, United States v. Foster ignited a trend across the country in which prosecutors use defendant-authored rap music as evidence at trial. Since then, rap lyrics and videos have been introduced into the courtroom as character evidence and in an increasing number of cases, the lyrics are allegedly themselves a crime. Rap music is inherently tethered to expressing a uniquely Black American identity and is a platform for resistance in the face of injustice.

Andrea Dennis, a professor at the University of Georgia School of Law and the co-author of the forthcoming book “Rap on Trial: Race, Lyrics, and Guilt in America,” describes how prosecutors have normalized the admission of rap lyrics into trial.

Dennis says that bringing rap lyrics into a trial is common because “prosecutors often argue the lyrics are either the defendant’s confession to the crime or circumstantial evidence the defendant committed the crime, e.g., proof of intent, knowledge, ability, motive.”

Critics argue using rap lyrics as evidence clearly violates sections of the Federal Rules of Evidence (FRE). FRE 404 (b) states, “Evidence of any other crime, wrong, or act is not admissible to prove a person’s character in order to show that on a particular occasion the person acted in accordance with the character.” Rap lyrics are being presented by prosecutors as proof that the artist’s must have a propensity for real world violence, since their lyrics are so graphic and violent. This “if, then” scenario prosecutors are presenting clearly violates FRE 404 (b). In many of these cases, the lyrics presented were written months to years prior to the alleged criminal actions they were on trial for.

Moreover, FRE 403 states, “The court may exclude relevant evidence if its probative value is substantially outweighed by a danger of one or more of the following: unfair prejudice, confusing the issues, misleading the jury…” According to the Arizona Law Review writer Reyna Araibi, rap lyrics used as evidence are unfairly prejudicial.

“Over the years, social psychologists have observed the distinct prejudicial impact that rap has on the way that people implicitly judge rap artists as violent criminals,” said Reyna Araibi.“These psychologists posit that rap is judged harshly because it is viewed through the lens of racial stereotypes.”

In Maryland, an aspiring Annapolis rapper, Lawrence Montague, was convicted of the 2017 murder of George Forrester. Montague recorded a rap song over the phone while he was in jail, which was then uploaded to Instagram.

Prosecutors argued that Montague murdered Forrester for trying to purchase cocaine with a fake bill, and the lyrics Montague recorded while in jail were a confession. Despite no specific mention of Forrester or specific detail of the crime itself, the Maryland Court of Appeals found that rap lyrics can be used as evidence in a case setting a legal precedent.

Critics of rap lyrics as evidence, such as Briana Younger suggested in her article,  The Controversial Use of Rap Lyrics as Evidence, that there is a larger social issue at hand in these cases.

“The admissibility of rap lyrics and videos as evidence is often framed as a legal matter, but it is really about race,” said Briana Younger, a writer for the New Yorker. “By introducing the work of a rapper into the courtroom, prosecutors are relying on racism to do its job—insisting that those in the courtroom accept, as fact, the worst kinds of stereotypes about this music and the people who make it.”

Leading music industry attorney, Dina LaPolt, adds, “I would invite anyone suggesting that this ruling is not limited to rap music to find an example of a court admitting lyrical evidence of a country singer driving drunk or shooting a cheating spouse.”

Ultimately, rap lyrics used as evidence is just another example of minorities’ constitutional rights being violated. The Maryland Court of Appeals decision symbolizes people of color’s rights as secondary and the perpetual racial animus within the criminal justice system.