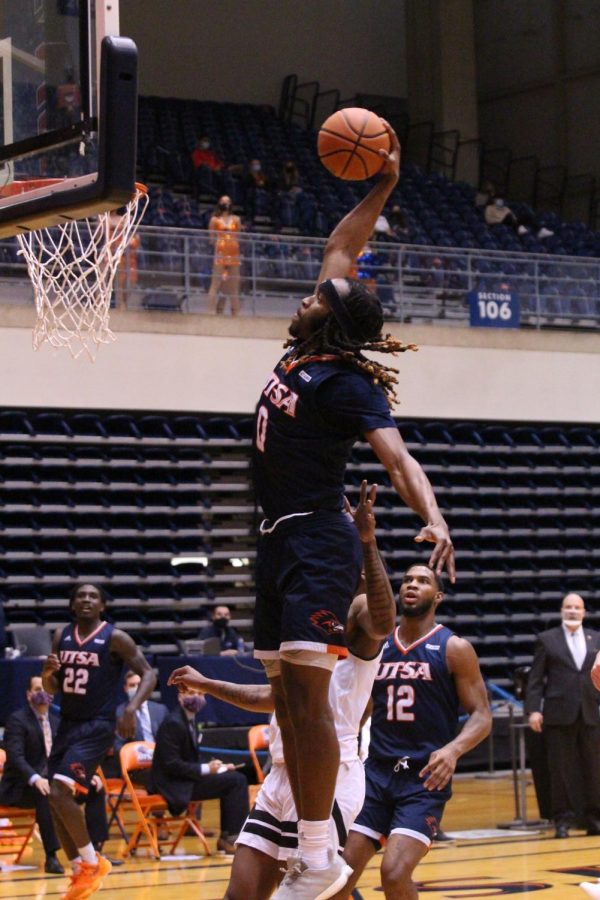 Cedric Alley Jr. soars through the air for a dunk during a game earlier this season. The redshirt junior transfer from Houston is currently averaging 5.9 points and 4.1 rebounds per game.

UTSA men’s basketball (10-9, C-USA 6-6) had an unforgettable road trip to Miami to face Florida International University (FIU). Starting with Keaton Wallace’s career-high night on Friday, Feb. 5, and ending with Jhivvan Jackson’s historic mark the following afternoon. UTSA’s victory on Saturday, Feb. 6, would end up being the largest road game win in program history. After struggling on the road all season, UTSA broke their road losing streak in resounding fashion.

The weekend sweep began with a neck and neck battle Friday night, which started with a commanding lead, at one-point UTSA led by 15 points. However, after the first half, FIU tied the game with seven minutes left in regulation. The senior duo of Jhivvan Jackson and Keaton Wallace responded as they drew fouls late, making trips to the free throw line to stretch the lead and secure the win. The two guards combined to shoot 10 of 10 from the free throw line. Wallace finished the game with a season best of 33 points, his 5th career game with 30 plus points, along with seven rebounds and two steals. Wallace exercised his range frequently through the night, going four of seven from long distance. After his impressive night, Wallace was asked how he felt about the game personally in a post-game interview.

“I just let the game come to me instead of forcing a lot of things early, and just my teammates, they were really the big key in my success today,” Wallace responded humbly.

Jackson was right alongside Wallace, finishing with 22 points, three rebounds and three assists. The duo combined for 55 points, which accounted for 63% of the team’s total. Their high production nights made it tough for FIU to find any way back into the game and the Roadrunners would hold on for an 87-80 victory.

Saturday afternoon was a different story and not very pleasant for FIU. The ‘Runners dominated the game from start to finish, leading by 24 points going into the second half and ending the game with a 43-point win. As mentioned earlier, this stands as the largest margin of victory on the road in program history. The duo of Wallace and Jackson once again went perfect from the free throw line going eight for eight. Wallace scored 16 points on six of 13 attempts shooting from the field, and Jackson scored 22 once again, enjoying a solid night from the field, going seven of 11 and four for seven from behind the arc. With his performance on Saturday afternoon, Jackson broke the league record for made field goals in Conference USA history. Alongside Jackson’s historic night, the redshirt junior Eric Parrish had a notable day off the bench. Parrish was perfect from the field, scoring 16 points to add to the blowout. The junior’s production off the bench helped keep FIU out of the game, and UTSA ran away with it.

The ‘Runners will return home to defend home court and keep the momentum from this weekend going. This time, they’ll be squaring off against the Florida Atlantic Owls (8-7, C-USA 3-3), who are coming off a loss in a close game against the Charlotte 49ers (9-9, C-USA 5-5). The ‘Runners have been strong all season at home with an 8-1 record. The first game of two will tip-off this Friday, Feb. 12, at 6 p.m.