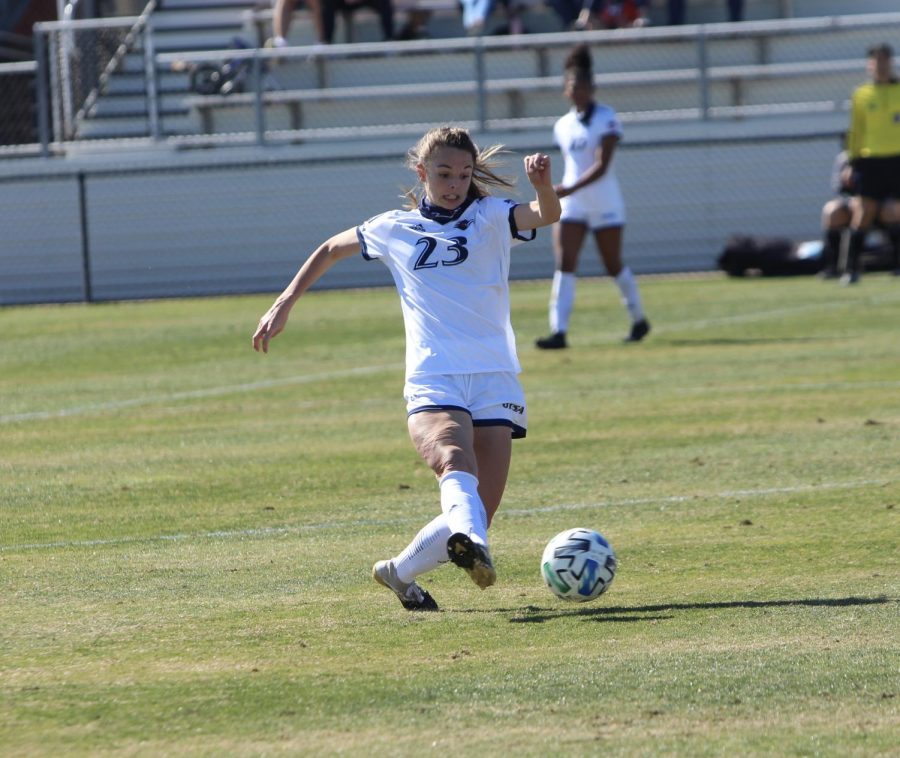 Alex Granville controls the ball during a game against Texas A&M-Corpus Christi. The sophomore midfielder and defender from Maitland, Fla., has started all three games for the 'Runners this season and logged a full 90 minutes of work in her past two games.

UTSA soccer returned to the pitch this weekend on Sunday, Feb. 14, to take on the University of Texas at Rio Grande Valley (UTRGV) Vaqueros (3-0-1). Taking place amidst below freezing temperatures, the game quickly turned into a battle against not just their opponents but the elements for both teams. Although the ‘Runners dominated play for nearly the entire game, they could not equate this dominance into any goals, losing the game to the Vaqueros 0-1, despite outshooting them by a margin of 12 to one.

UTSA began the game in control early, with forward Abby Kassal putting two shots on the net within the first five minutes of the game, but both were parried away by UTRGV keeper Maile Lunardi. In the 18th minute, the one blemish on UTSA’s defensive effort occurred as a handball handed a penalty kick to the Vaqueros. UTRGV midfielder Gina Steiner stepped up to the penalty spot and calmly slid the ball into the bottom left-hand corner past UTSA keeper Taylor Rath to hand the Vaqueros a one-goal advantage they would not relinquish for the rest of the game. UTSA attempted to respond quickly and Lexi Bolton’s looping shot in the twenty-first minute appeared on course to tie the game up, but Lunardi managed to make a fingertip save to keep the one-goal advantage for the Vaqueros. In total, UTSA took six shots in the first half, but only three were on target.

The ‘Runners started the second half off strong, taking two shots and winning a corner within the first 10 minutes of the second half, but they were unable to make anything of these chances. UTSA continued to apply pressure throughout much of the second half, but UTRGV was content to hang back on their side of the field and absorb whatever pressure UTSA threw at them. UTSA would make one final desperation attempt in the 85th minute, but Ariana Gomez’s effort was easily scooped up by Lunardi, and that would be the last shot UTSA had for the game.

The loss drops UTSA’s record to 1-2-0 on the season, having now lost two back-to-back 1-0 games. UTSA continues to outshoot their opponents by a wide margin, now holding a 35-15 margin in shots for the season. This has not translated to goals, however, as UTSA is currently mired in a 205-minute goal drought and have only managed to put 12 of their 35 shots on net so far this season.