UTSA men’s basketball keep the brooms out with another sweep 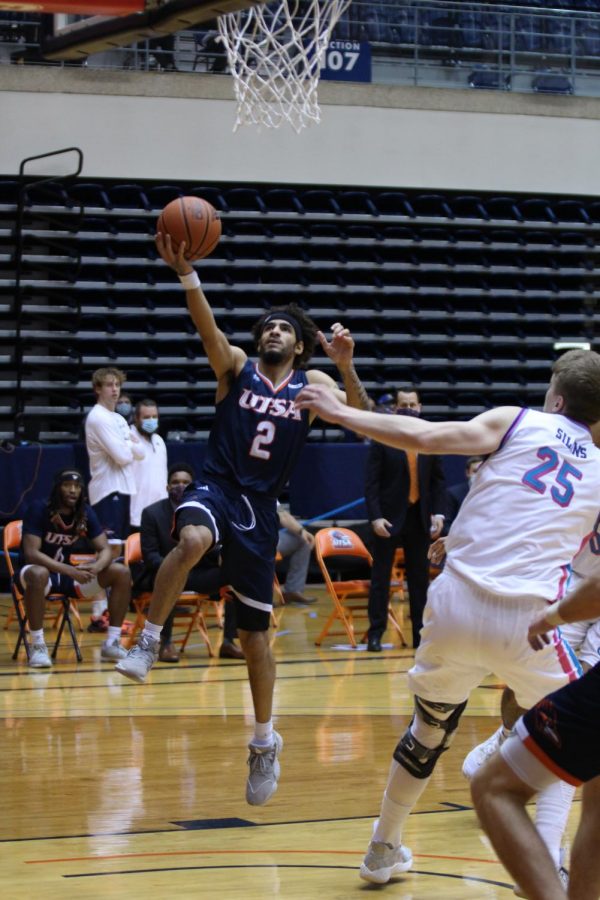 Jhivvan Jackson goes up for a layup against FAU on Saturday. Jackson averaged 25 points, 7.5 assists, and 6.5 rebounds for the series, earning C-USA Player of the Week honors.

The Roadrunners extended their win streak to four over the weekend (12-9, C-USA 8-6), starting with Friday night’s win on Feb. 12, over Florida Atlantic (FAU) by a final score of 84-80 and ending with Saturday’s 86-75 win on Feb. 13. The ‘Runners seem to have something special going on here late in the season, right when it matters the most.

Friday night’s game was a close contest as FAU put up a fight in the first game of the series. However, their efforts would not be enough for Jacob Germany and Jhivvan Jackson. The two took over the game with dominating performances. Germany had an excellent game with his fifth career double-double, scoring a career-high 26 points along with 12 rebounds. The sophomore center shot 13-21 from the field and made his presence felt around the rim with key blocks throughout the game. Interestingly, Germany matched his teammate Jackson in shot attempts with 21, which speaks volumes knowing the production Jackson has been accumulating. This proves Germany made himself active, ready to make shots Friday night.

Jackson once again put on a clinic for the ‘Runners, scoring a game-high 30 points to go along with six assists and six rebounds. Shooting 11 of 21, Jackson had another night to remember. His perfect stat line from the free-throw line also helped, which was crucial towards the end of regulation, when UTSA nearly let a commanding lead late slip away, but held on for the win thanks to solid free-throw shooting. The all-time leading scorer for UTSA, Jackson has had a stretch of performances recently and seems to be finding a groove these past few games.

Saturday afternoon was more comfortable against FAU than Friday as the ‘Runners beat the Owls by 11 points. The name of the game was to spread the scoring out as UTSA finished the game with five players in double figures for the first time in two years. It was very clear the ‘Runners took notes Friday night to make sure they would send FAU home winless. Jackson led the way once again with 20 points and seven rebounds. Jackson’s effort over the weekend helped earn him Conference USA Player of the Week honors. The offense Saturday afternoon was simply too much for FAU to stop. After a quiet night on Friday, Keaton Wallace was also in the mix, adding 14 points on the board while shooting five for 10 from the field. Another positive was getting volume minutes off the bench from players like Erik Czumbel and Eric Parrish. The two combined to contribute 26 points and helped the ‘Runners ease to a win.

While this past weekend’s games were impressive, many saw these results coming as the ‘Runners always seem to protect home court, now sporting a 10-1 record at home. It is their next destination that will have a huge impact in determining how well the team is set up to make a run in the conference tournament. They will be traveling to North Carolina to take on the Charlotte 49ers (9-11, C-USA 5-7), and they will do so sporting a 2-8 record on the road this season. However, the ‘Runners are going into North Carolina extremely hot with their four-game win streak and being winners of seven of their last eight games. With the season coming to a close, look for the ‘Runners to make a late push to improve their seeding in the conference tournament. Offense continues to be the team’s strength, but with a couple of adjustments to the defense, this team could do some damage going forward. A streaky team could be dangerous to any opposing team during this time of the season, and the ‘Runners seem ready to embrace that opportunity.

In a post-game interview via zoom, Germany explained how the team’s recent success could guide them to more accomplishments. After being asked if the confidence is building, Germany stated, “Each game we get in the win column, that’s just more fuel to the fire. We’re going to try to be one of those teams that just gets hot at the right time and make a run deep in the conference tournament.”

The ‘Runners will take on the Charlotte 49ers this Friday, Feb. 19, at 5 p.m. in North Carolina. Look for UTSA to keep the momentum going and take care of business on the road again.