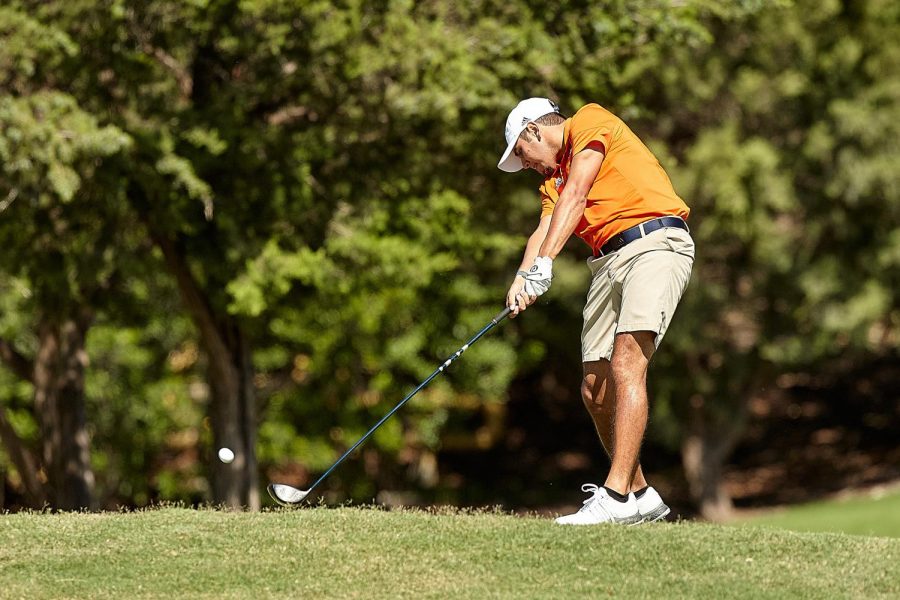 Chad Sewell hits a drive during this week's season opening tournament. Sewell finished as the highest placed Roadrunner in the field in a tie for 15th at 4 over par.

The UTSA men’s golf team began their 2021 season with a sixth-place finish in the University of Houston’s Border Olympics tournament, Feb. 22-23. The Roadrunners finished the three-round competition 24 strokes over par, placing them behind University of Louisiana Monroe, Sam Houston, Houston, Texas and Texas A&M.

Leading the ‘Runners, senior Chad Sewell concluded the tournament in a four-way tie for 15th place, shooting a 220. Sewell posted a 75 for the first round before shooting a tournament-best 71 in the second round. Hitting two over par in the final round, Sewell finished tied with Houston’s Austyn Reily, Sam Houston’s Paul Chaplet and ULM’s Otto Van Buynder. His performance led to his sixth career top 15 finish accompanied by nine birdies.

Junior Christian Fanfelle finished three strokes behind Sewell, landing him in a tie for 25th place. Posting a team-best 10 birdies during the three rounds, Fanfelle began the tournament with a 78 but turned the tide of his performance after hitting a tournament-best 71, accompanied by six of his birdies in the third round after a second-round performance of 74.

Hunter Bott followed closely behind Fanfelle by two strokes, landing tied for 29th with a 225. After posting a score of 80 in the first round, Bott shot one under par in the second round for a score of 71. In the final round, he posted a 74, concluding his slate of six birdies and an eagle.

Tied for 37th with a score of 226, Collin Clark began the weekend with a one-under 71, a finish of 80 for the second and concluded with a score of 75. Redshirt junior Michael Rome rounded out the scorecard for the ‘Runners with a tie for 69th place with a 232. Rome completed the first round of the weekend with a 74-stroke finish, followed by a team-high score of 83 for the second round. He concluded his tournament competition with a 75-stroke performance.

The ‘Runners will be returning to the links March 1-3, at the Cabo Collegiate tournament at TPC San Antonio in the Alamo City.