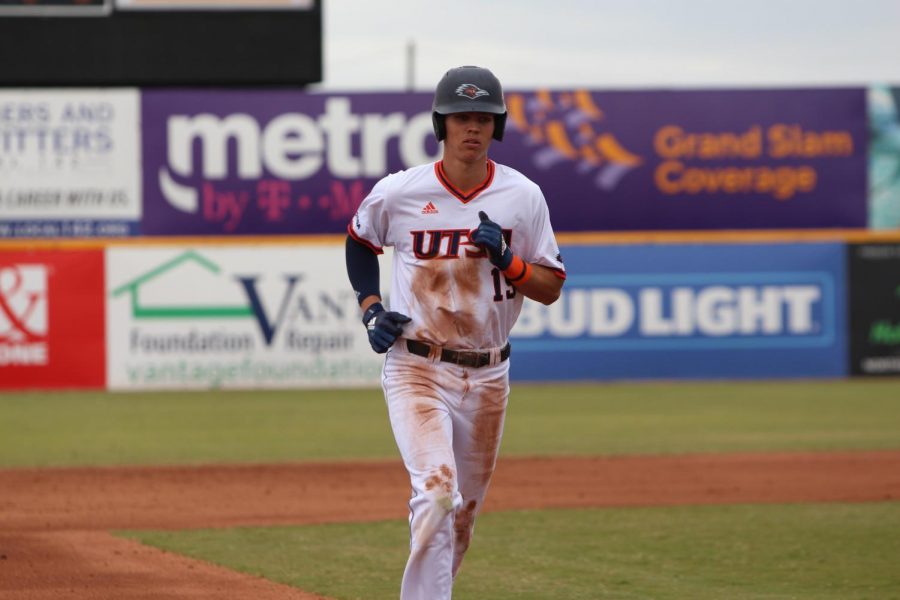 UTSA baseball opened their season on the road this past weekend, taking on the Sam Houston State University Bearkats (1-4) for a three-game series from Feb. 26-28. UTSA started the series off slowly, dropping the opening game by a final score of 2-4. UTSA would bounce back over the next two games, though, taking the victory on Sunday by a final of 10-4 before putting an exclamation point on the series, crushing the Bearkats by a final score of 18-5. The series victory on the road was the first of head baseball coach Pat Hallmark’s UTSA career.

The series started on Friday night, and things got off to a shaky start for the ‘Runners. Griffin Paxton opened the game by working a 9-pitch at bat and drawing a walk, but the ‘Runners would be unable to capitalize on the early chance, stranding him at second to end the top of the first. Luke Malone got the start on the mound for UTSA and almost immediately found himself in trouble. A walk issued to Sam Houston State’s Colton Cowser was followed by a wild pitch, putting him in scoring position, and Sam Houston State made Malone pay for the early opportunity. Jack Rogers’ chopper to first skipped off the glove of Paxton into right field, and Cowser came around to score and hand Sam Houston State the early 0-1 lead. Malone settled down from there and got out of the inning before going on to retire the next eight batters he faced. UTSA eventually responded in the top of the fourth when Ian Bailey led off the inning with a single and eventually came around to score after Leyton Barry grounded into a fielder’s choice to tie the game at one. Malone was unable to hold the lead, though, giving up a ground rule double to Rogers to start the bottom of the fourth and eventually allowing two runs to come across to give Sam Houston State the lead 1-3 before he was pulled. Malone finished the day going 3.2 innings, allowing four hits, three earned runs, two walks and three strikeouts. UTSA was unable to respond the following inning and from there the team’s bats fell silent as poor quality at-bats doomed UTSA’s chances of capitalizing on the opportunities given to them. Sam Houston State would put another run across in the bottom of the fifth to go up 1-4, while UTSA never found a rhythm on offense to get back into the game. From the fifth onwards, though, UTSA would keep it just a three-run game as strong work from the bullpen, notably from Kyle Sonduck and Zachary Griggs, limited the Sam Houston State offense. In the top of the ninth, UTSA gained some hope of a comeback when Austin Ochoa drilled a ball into left center field for the first home run of his UTSA career. A Joshua Lamb double would bring the tying run to the plate, but Shane Sirdashney was unable to hold back on a pitch in time, and a check swing dribbler to the shortstop was easily handled and put away, handing Sam Houston State the opening game of the series by a final score of 2-4.

Game two of the series, however, saw UTSA shake off their early offensive struggles. Grant Miller got the start for UTSA on the mound and immediately got into trouble, allowing two runs to come across for Sam Houston State, but managed to get out of the inning by striking out Corbin Vines with runners on second and third. Down two early, the UTSA offense responded by exploding in the second for eight runs while sending 13 batters to the plate. The inning started off with a leadoff home run by catcher Nick Thornquist, and the offense kept the momentum going from there. A Paxton double scored Ochoa to tie the game at two, and then a Lamb three-run home run broke the game open and handed UTSA a lead they wouldn’t relinquish. Another three-run home run, this one from Bailey, gave the ‘Runners some breathing room with an 8-2 lead and chased Sam Houston State starter Matt Dillard off the mound after only 1.1 innings of work. Miller would eventually be pulled after three innings, and the ball was turned over to senior Shane Daughety, who worked five innings of relief, allowing three hits, one earned run, four walks and picking up the win for his efforts. Both offenses calmed down after the blistering start before action picked back up again in the ninth. The ‘Runners put across two more runs before UTSA’s John Chomko came on to work the bottom of the ninth, giving up a run before striking out the final two batters he faced to secure UTSA a 10-4 victory.

If the second game of the series saw UTSA’s bats wake up, the third and final game of the series saw the offensive attack of the ‘Runners truly flex its muscles. Thornquist started the scoring off in the first with a single to right center that allowed Dylan Rock to come around to score. Sirdashney followed it up with an RBI double in the second, Shea Gutierrez and Lamb contributed in the third with a pair of RBI singles, and Gutierrez and Tapia would extend the lead to 6-0 by the end of the fifth inning with two sacrifice RBIs. Sam Houston State would slowly creep back into the game, forcing UTSA starter Reece Easterling out of the game after 4.1 innings of work in which he surrendered a two-run home run to make the score 6-2 ‘Runners. Hunter Mason came on in relief and got out of the inning with no further damage. UTSA responded in the next two innings as a two-run home run from Bailey and a three-run home run from Paxton, the first of his career, gave UTSA a commanding 11-2 lead. Vines brought Sam Houston State back within seven with a two-run home run in the bottom of the eighth, but like they had all game, UTSA responded immediately. The ‘Runners capitalized on a number of Bearkat mistakes to score seven runs in the inning off of only three hits, taking an 18-4 lead. Sam Houston State managed to score one run in the ninth, but they’d run out of gas from there, and UTSA took the deciding game of the series by a final score of 18-5, with Hunter Mason earning the win after his work in relief.

Overall, it was a solid opening series from UTSA with strong outings from the bullpen and a dominant offensive display especially over the final two games of the series. UTSA will return to San Antonio for their home opener with a four-game series against UT Arlington starting on Friday, Mar. 5, at 6 p.m., followed by a double-header on Saturday starting at 1 p.m. before the series concludes on Sunday at 1 p.m. All games will be available to stream on CUSA.tv.